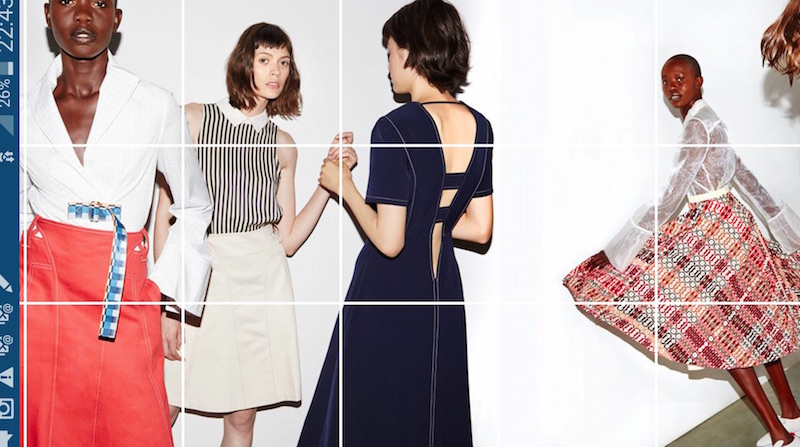 Here’s the latest ‘Ask Alison’ post from DRG retail editor, ALISON BISHOP, on how the fashion industry is acclimatising itself to a Fashion Month season where insta-shows, influencer-clicks and on-demand eyeballs are the new goals.

LIVESTREAM OR BE DAMNED
Now that livestreaming has become commonplace and you may as well watch your favourite show at home out of the rain (in London), the focus has shifted to livestreaming with the added bonus of tracking followers. Since Periscope burst onto the scene in March this year, with Burberry, then Dunhill, Belstaff and Marc Jacobs all using the Twitter-owned platform to beam shows, backstage tidbits or Q&As to live global audiences, the industry is changing its mind about the question of exclusivity.

“Periscope allows true consumer access to the best in fashion month,” Tank magazine fashion director Caroline Issa tells Forbes magazine in an interview. “It means a wonderful inclusion and access to what was [once] truly exclusive – it’s a step closer to the action.”

#FashionUnfiltered is the buzzword of the season according to Periscope’s marketing team, who have witnessed the channel’s popularity with the fashion industry go through the roof. “Now Periscope is changing the digital landscape,” says David Wilding, Twitter’s head of planning. “It’s a broadcast app that makes whatever you are doing live to all your followers. We are always thinking about how fashion brands can include fans into content. Now that’s possible live and immediately on Periscope,” he says.

Ralph Lauren and Hunter Original are leading the Periscope action for SS16 in New York and London respectively. While Ralph Lauren’s show yesterday showed it’s possible to target both fashion cities at once, via its dual Periscope presence – live and direct from the brand’s show held in Manhattan’s Skylight Clarkson Square simultaneously beamed to anyone in the vicinity of a giant screen in London’s Piccadilly Circus (below) – it is also worth pointing out that should their followers be inspired to shop, they can of course pop into nearby flagship stores in each city. But digital reach is clearly front of mind for EVP of global marketing David Lauren, who told WWD: “There are the [estimated] two million or so people passing through Piccadilly each week, and very few of them probably expected a front row seat to New York Fashion Week.” 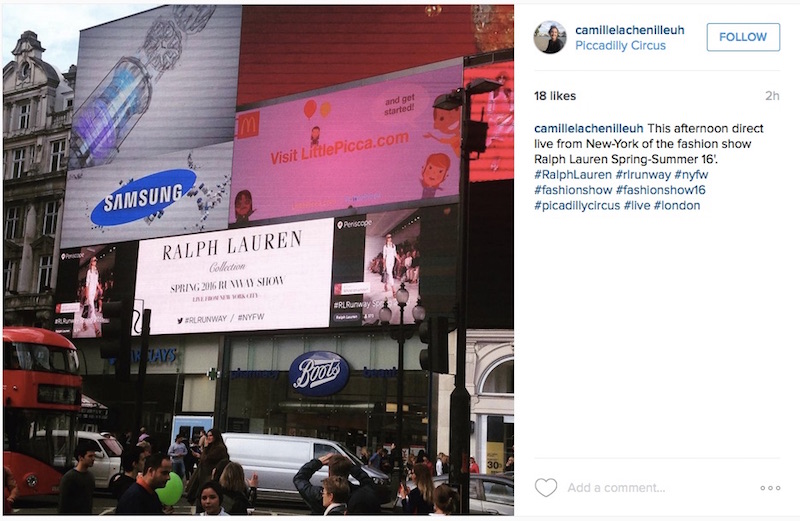 Hunter Original continues its association with backing new music talent, and following in Burberry’s footsteps (the first fashion brand to partner with Apple’s new streaming platform for its show on Monday), it is leveraging the live aspect of Periscope by offering coverage of gigs from bands on Hunter Original’s radar in the run up to tomorrow’s show. The brand plans to continue giving access via Periscope to its choice of music acts ahead of a busy festival season into 2016. I like this type of nurturing brand behavior that also chimes with its brand DNA.

While it wasn’t on Periscope, Givenchy (below) underscored the new inclusive point of view by presenting its SS16 show in New York instead of Paris. Reaching a bigger audience was the goal, with a mega show that was opened up to the general public on the anniversary of 9/11, bolstered by the associated symbolism of artist Marina Abramovic spiritual set design, not to mention the celebration of Riccardo Tisci’s decade-long tenure at the house. This show encapsulated the idea that shows are now a living, breathing brand statement to be shared around the world for all to see. This emotive event has surely kick-started a sea-change where digital reach is now more important than physical attendance. 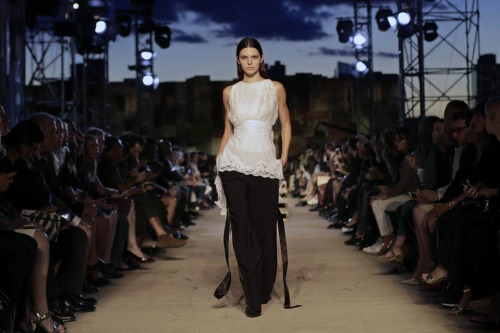 Meanwhile, Burberry is again pushing the digital envelope with a pre-live show built into its live show this LFW season. The British luxury brand is upping the social platform action via a new partnership with Snapchat (below), that will air finishing touches being made to key collection looks on the millennial channel of choice 24 hours before the official Burberry show and then disappear. While Snapchat’s 100m users are being targeted in this campaign, the use of ephemeral, teasing backstage show imagery is the currency of the Snapchat generation and gives Burberry a longer social conversation, ahead of its key LFW show slot. 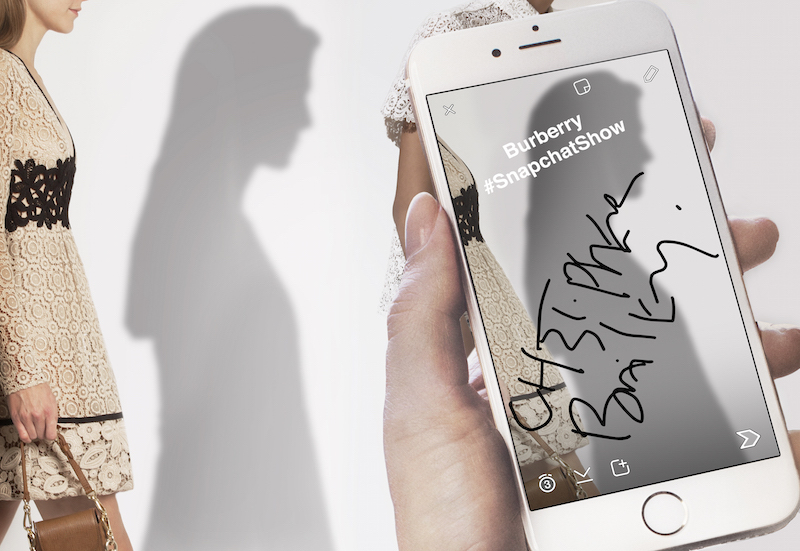 INFLUENCERS ARE THE NEW EDITORS
Thanks to the influencer nature of Instagram, brands are now using the platform to host insta-shows instead of physical shows, with the aim of reaching editors and consumers alike.

New York designer Misha Nonoo chose an Insta-show (top) instead of her usual presentation after a meeting with Facebook chief Sheryl Sandberg that inspired Nonoo to make the most of ‘this amazing visual storytelling platform” and the way it allows designers to interact directly with their customers. The ‘show’ took place last week, during NYFW and while her followers on a dedicated Instagram could flip their mobiles to see a continual flow of all Nonoo’s 21 looks (and immediately pre-order via the designer’s website), there was the extra interactivity layer from Nonoo’s female fan base. Entrepreneurial women from the arts, political and business worlds – including entrepreneur Linda Rodin, Sara Mears of the New York City Ballet and political consultant Audrey Gelman – responded to Nonoo’s call out to style themselves in her clothes and post images to their Instagram accounts at the same time as her show. With their combined followers of +7m on the platform and Nonoo’s pioneering attitude to experimenting with the show format, this feels like a pivotal moment. 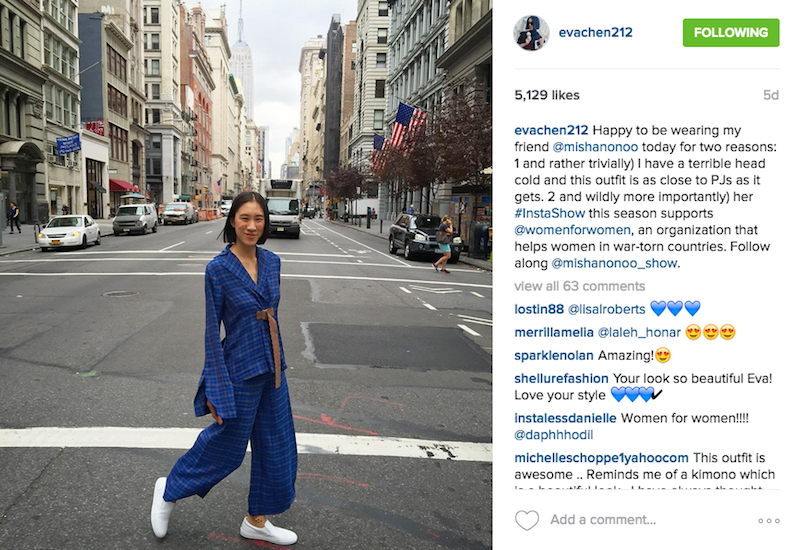 British designer Zoe Jordan is another designer using a digital-only show format this season, courtesy of PR and production agency KCD’s digital shows platform. Jordan showed her SS16 collection first during NYFW and will repeat the show during LFW’s digital schedule on Sunday at 1.30pm via a screen in London’s Golden Square. “I’ve seen a lot of brands taking a step to a more all embracing show model this season…it felt important to invite the public to be part of it,” says Jordan. “I layer digital with physical – a virtual show is complemented by a physical showroom, and this melding of disciplines feels right for my brand.”

INSTA-INSPIRATION
It’s clear that Instagram is increasingly becoming the go-to visual portal for behind the scenes storytelling. In New York both Proenza Schouler and new DKNY creative directors Dao-Yi Chow and Maxwell Osborn of Public School fame, have offered followers exclusive tidbits and a highly curated window into their creative worlds.

While the Proenza Schouler visual essay project (below) was to coincide with the new AW15 deliveries and was drip fed over five days via the brand’s account, the DKNY exercise was intended to set the tone of voice for a new era at the brand. Since her appointment as fashion director at Instagram over the summer, Eva Chen certainly seems to be leaning into an inclusive new fashion remit at the platform, that the fashion industry can’t get enough of. 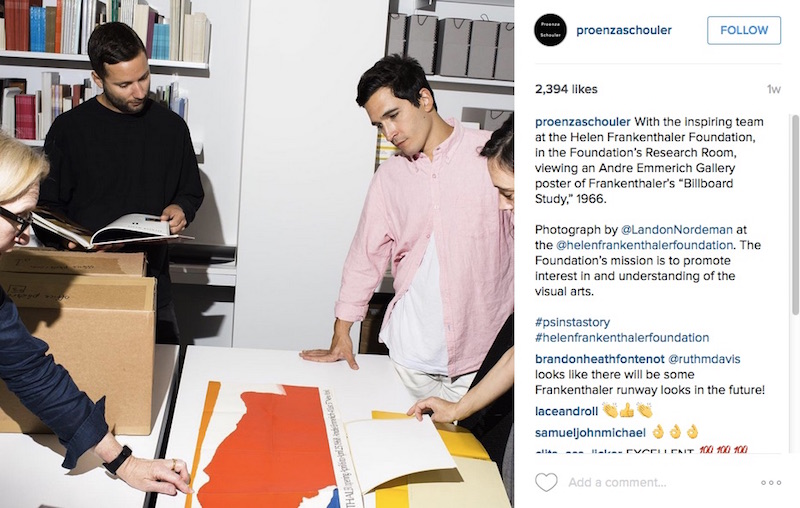 COLOUR ME UP
With its usual pre-LFW fanfare, Topshop has launched a new democratic digital initiative, which aims to utilise its customers’ colour preferences gathered from fashion week images on Pinterest. The exclusive partnership called Pinterest Palettes allows users in the UK and the US to create colour-driven mood boards based on their favourite fashion week designers or street style stars.

As with previous seasons, Topshop is again taking a ‘phygital’ approach to its LFW campaign by straddling both online and in-store customer interaction. Pinterest Palette services will be available in the Oxford Circus, London store where a dedicated pop-up on the lower ground floor will host colour-themed personal shopping appointments and daily colour-themed AW15 merchandise on display. The campaign runs throughout fashion month, until the close of Paris on October 7.

ASK ALISON: WHAT DOES IT ALL MEAN?
If Periscope is the new video, then Instagram is the new form of print – certainly in terms of visual culture. And as far as fashion weeks go, they are now an inclusive, widely democratic affair where digital reach and influencer clicks are the watchwords for success.

Follow ALISON BISHOP on Twitter, read her previous guest posts on Disneyrollergirl and discover more of her retail insights on her blog, The Retail Planner.