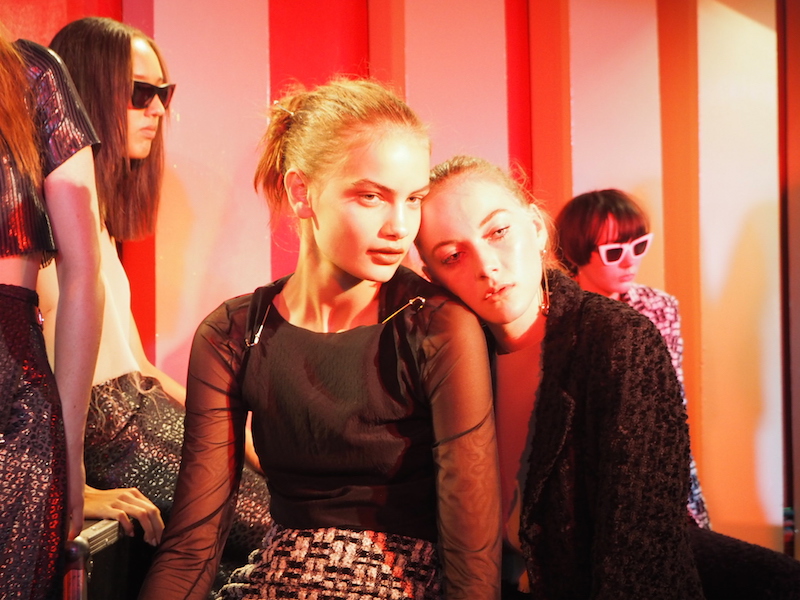 Is there any point in doing daily LFW roundups in these days of Instagram coverage and watch-it-yourself Periscope shows? Hell, yes, if only for the reason that it reminds me of what I’ve seen when it comes to pitching to clients in three weeks time.

I’ll admit I’ve been easing into LFW slowly for the first two days, but I’ve already seen lots to whet my SS16 appetite. Happpily, I’m noticing a lot more colour and joy, bringing us out of the #liveclean minimalism we’ve experienced for so many seasons, into something more energetic.

Such as Le Kilt on Friday. I like what Sam McCoach does as a creative director. Her vision is believable and all-encompassing, from the casting to the venue and set design, to the music. The first clue came from her brilliant illustrated invite, announcing Stupid Girl as the loose theme for her SS16 collection. Shown at the iconic 100 Club (venue of many a legendary punk gig), last season’s stroppy school girls had swapped their blazers and knee socks for Linton tweed trousers, fishnet tights and back-of-the-tourbus cat-eye shades. 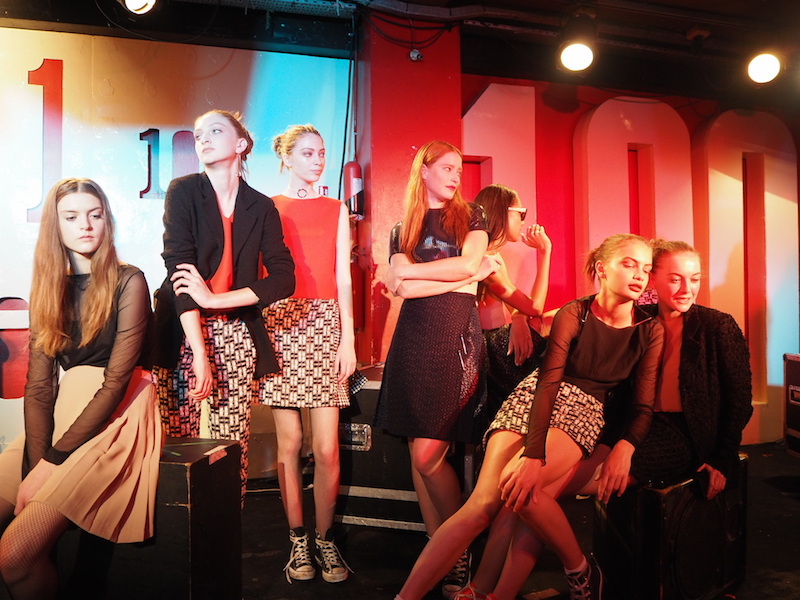 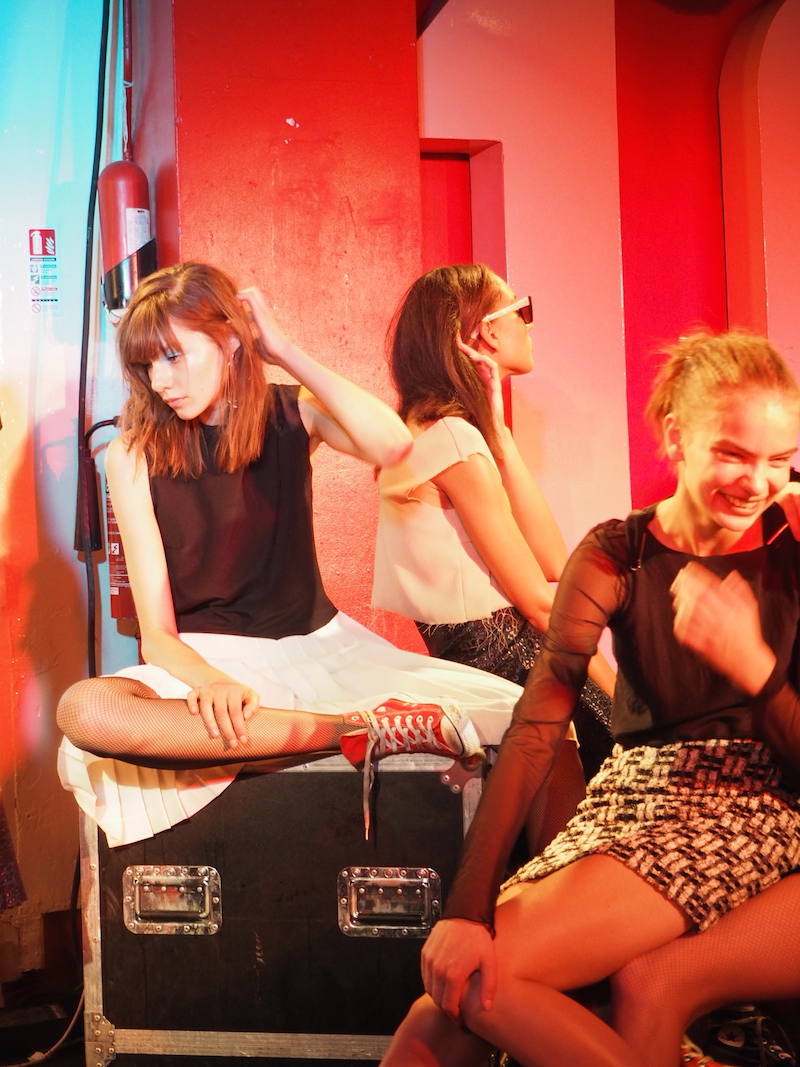 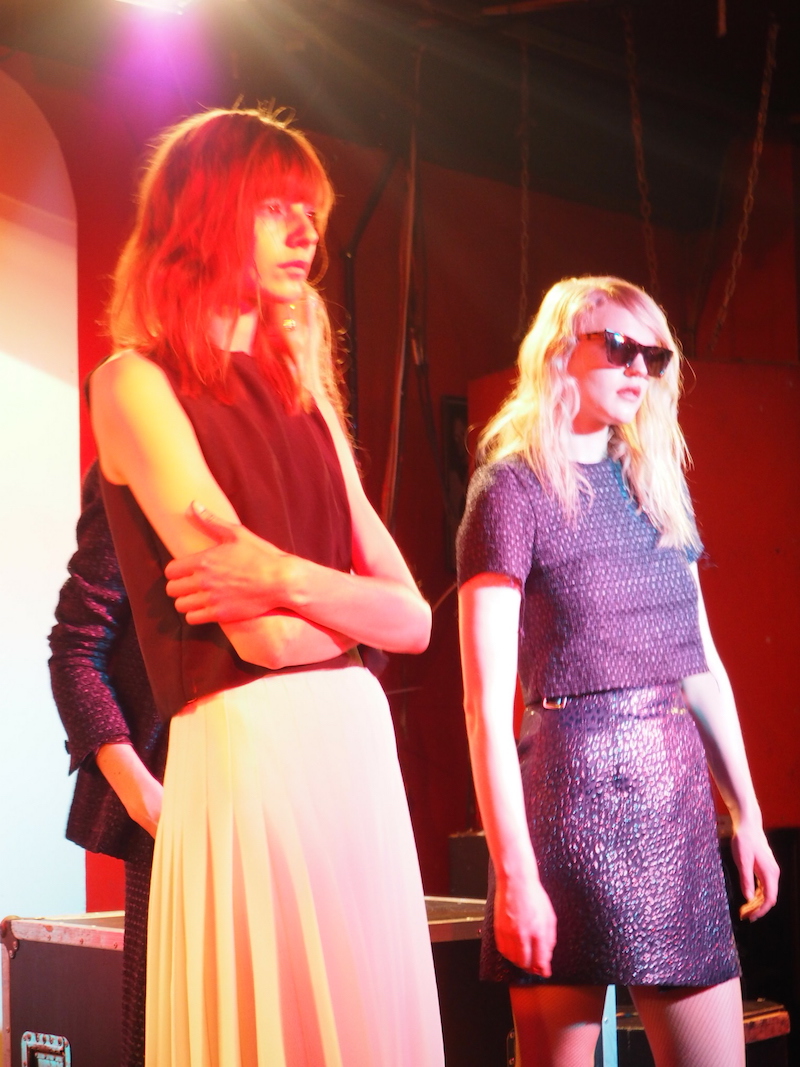 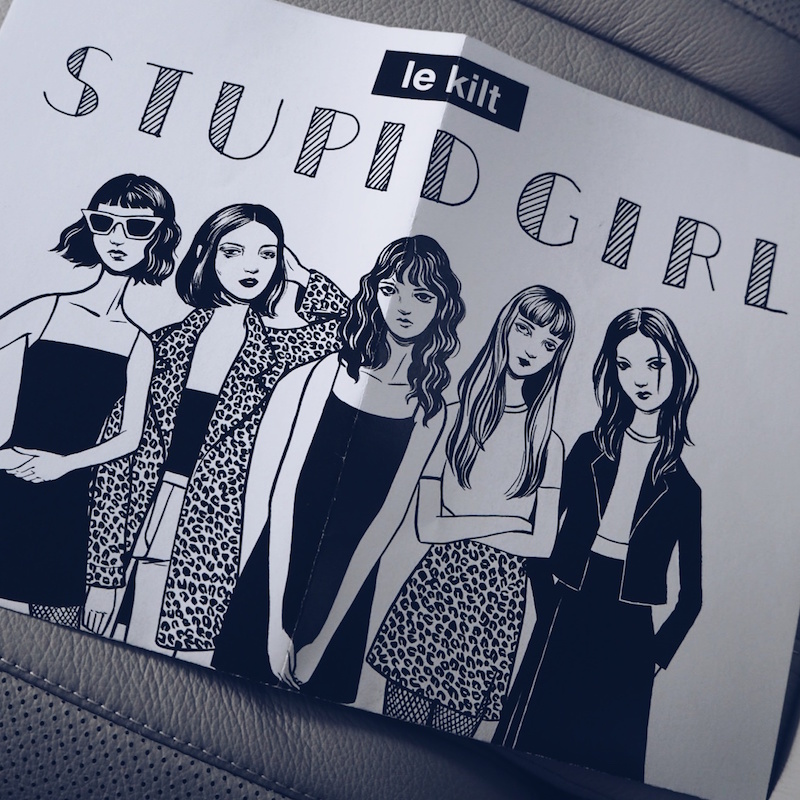 More teen spirit came in the form of NEWGEN designer Molly Goddard’s slouchy shouldered production line kids, making lettuce sandwiches enrobed in voluminous neon tulle dresses and ruched skirts. This wasn’t the most commercial of collections, but here are definite ideas and a strong brand signature being formed and I like that it’s all a bit wonky. 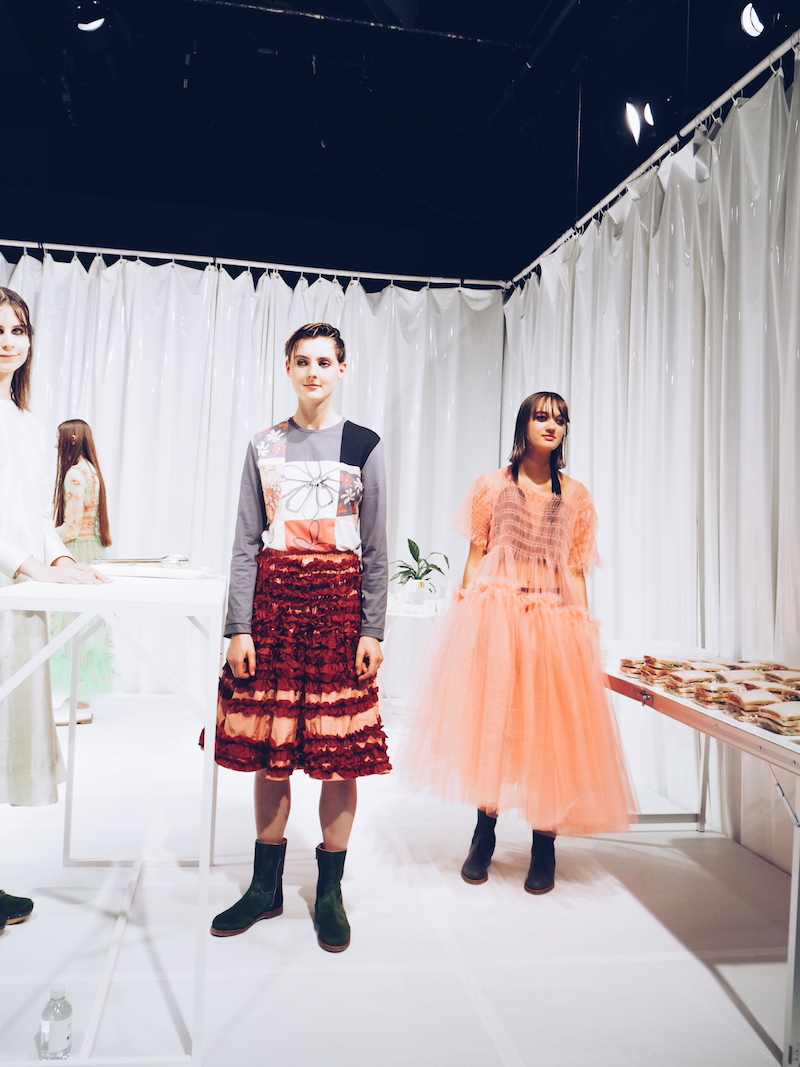 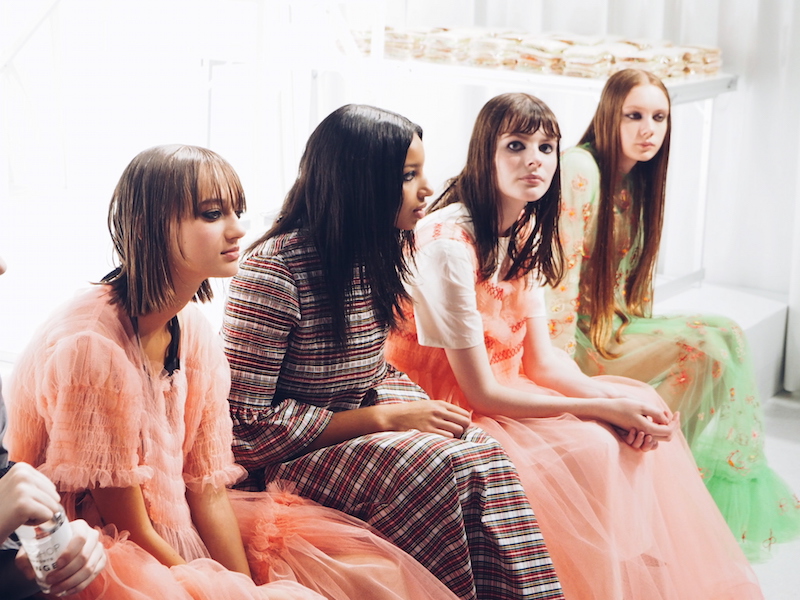 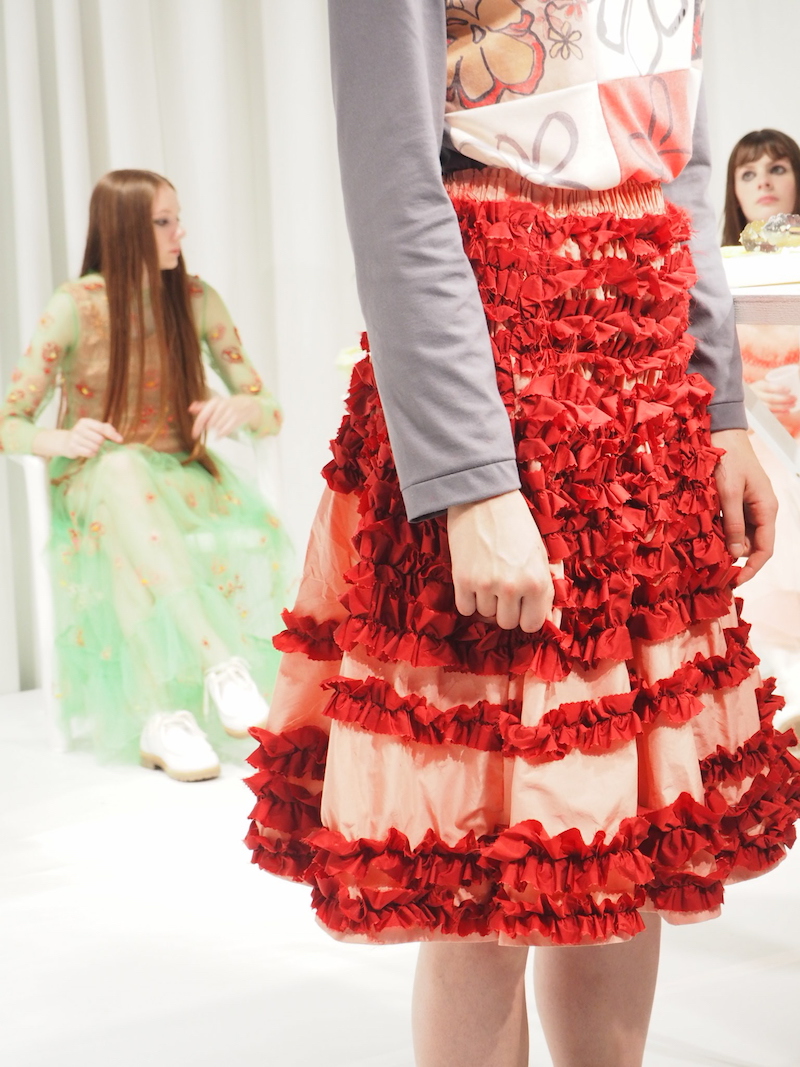 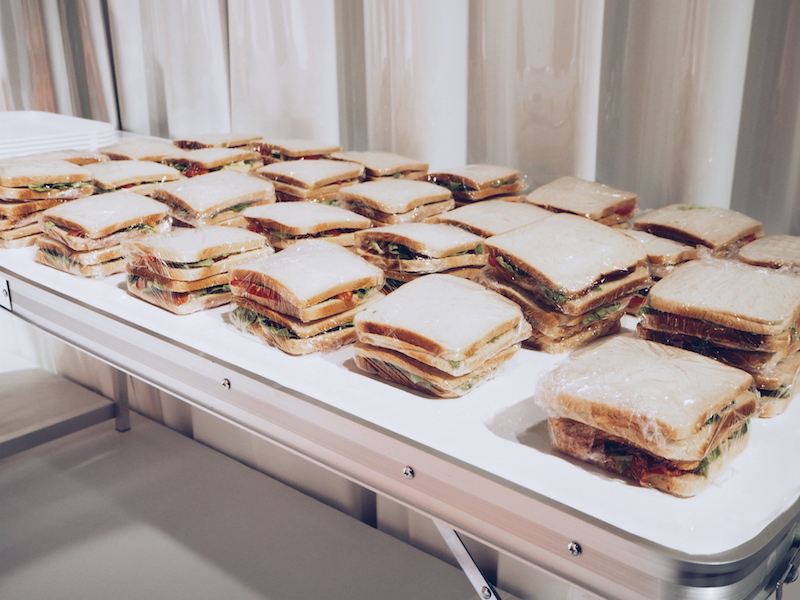 Talking of wonky, Faustine Steinmetz continues to be one of my LFW highlights. Her vision is so pure and uncompromising and her presentations are brilliant. This season her models were half-in-half-out of holes cut in walls, giving us a surreal vision of her clothes. Which were better than ever. Yes, still lots of labour-intensive ‘denim’-play, but accompanied by more ‘mass-produced’ fare (i.e. pieces that don’t take hundreds of man hours to produce). 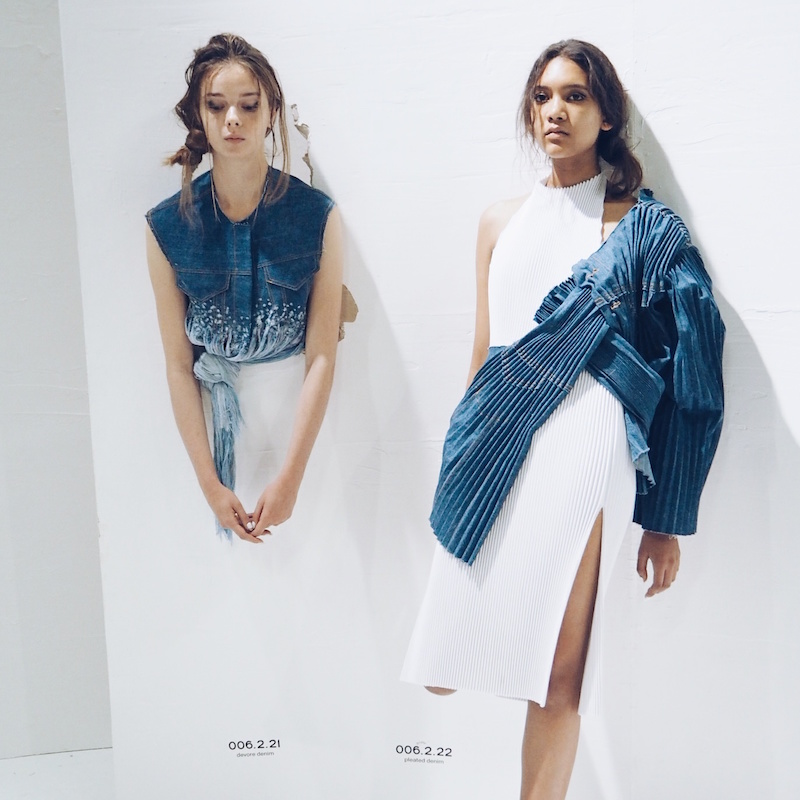 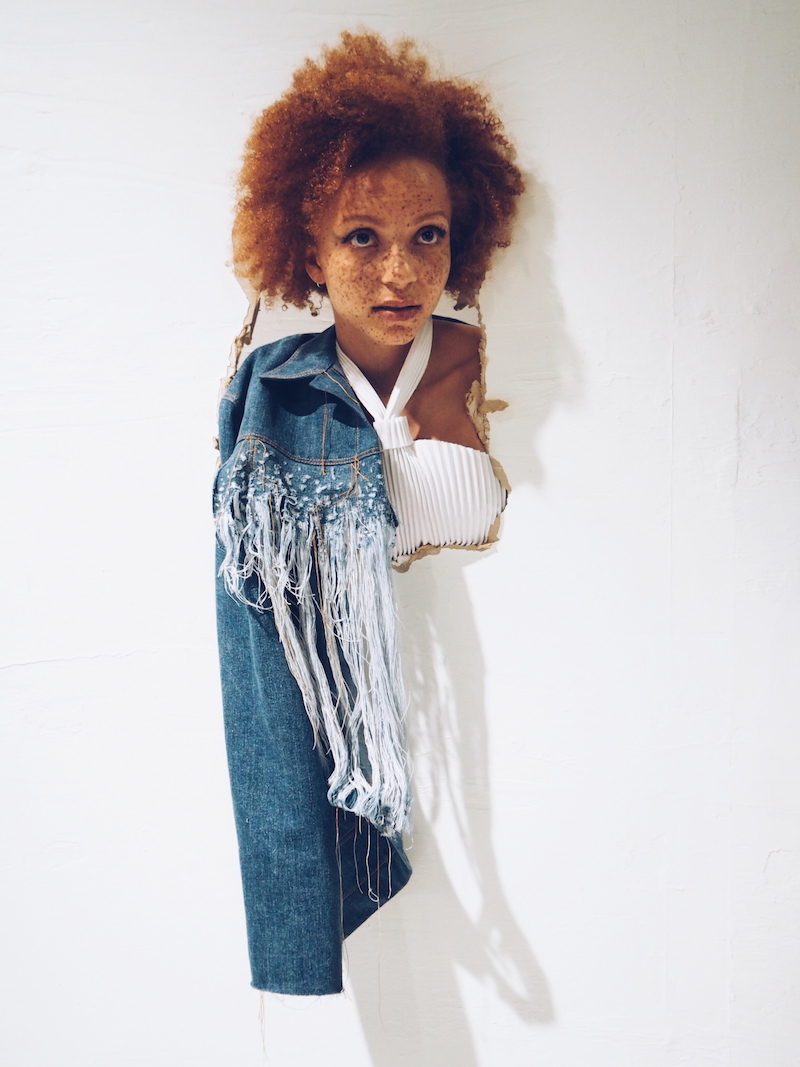 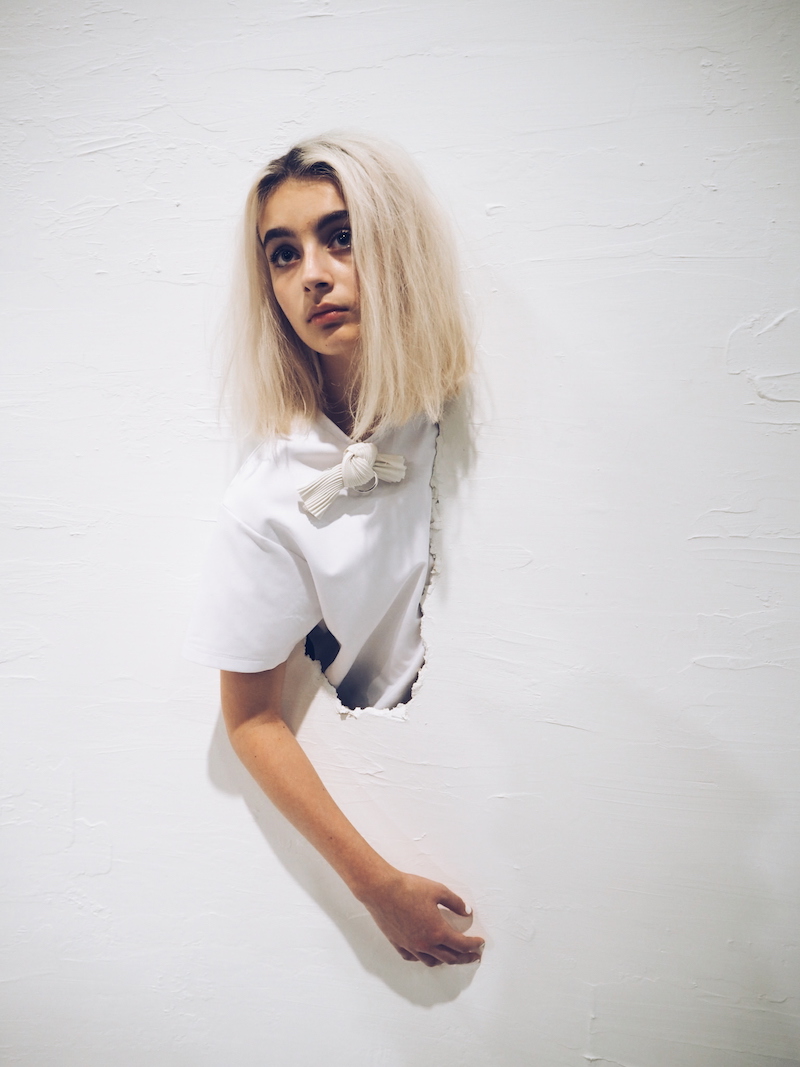 There was a similar moment of surreal body-forming at the preview tour of Louis Vuitton’s  #LVSeries3, an ‘experiential exhibition’ that opens to the public tomorrow (it’s free, book tickets online or turn up and queue). A look inside the mind of Nicolas Ghesquiere, its aim is to immerse you in the making of the AW15 collection, from the inspirations, to the artisans who make the Petite Malle bags, to the show itself (shown on dizzy-making digital screens in a round room), to the ad campaign. My favourite room is this bright white one with its almost-disappearing mannequins modelling the key accessories. There’s also going to be a Bistrotheque café which sounds rather fab but was nowhere near finished yesterday afternoon… 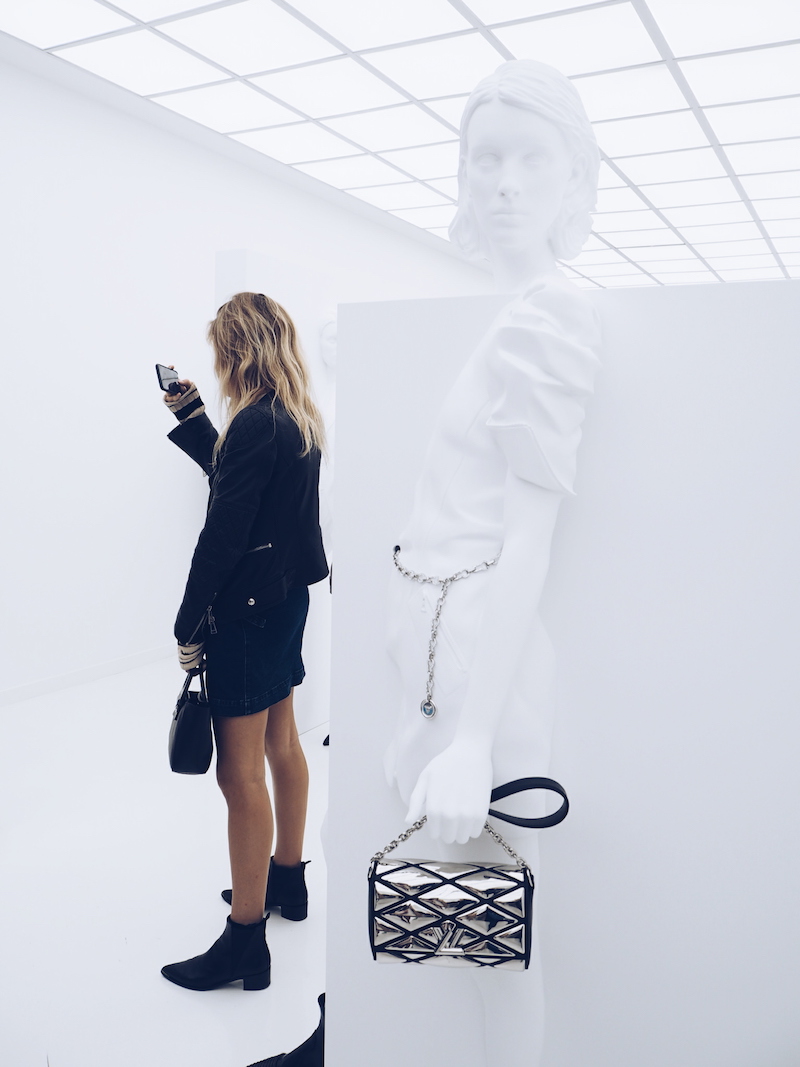 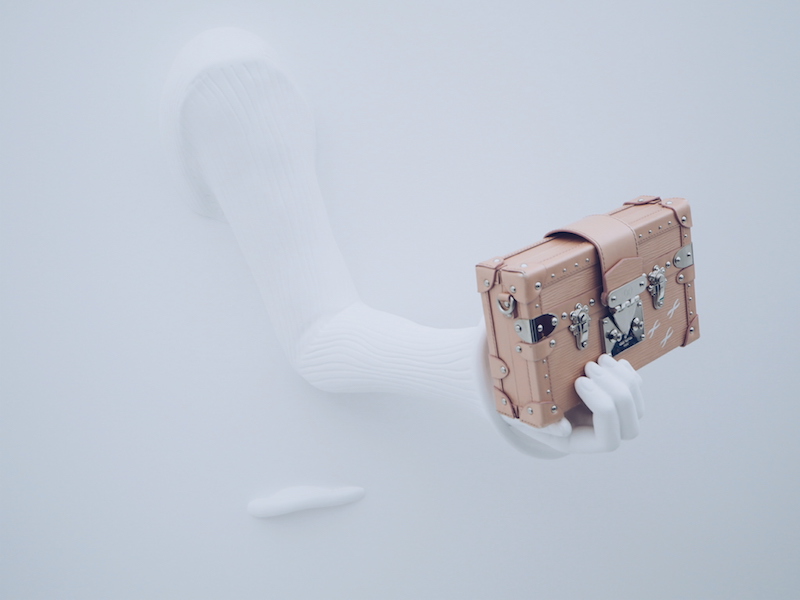 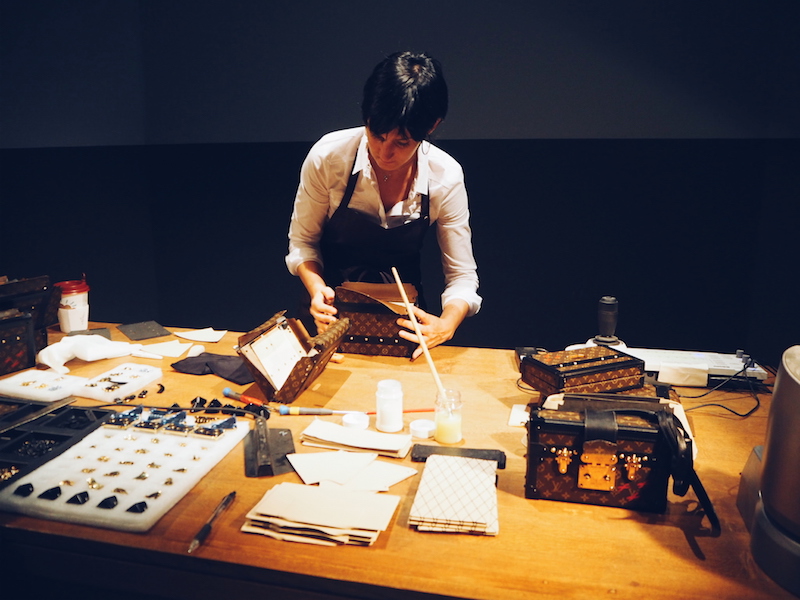 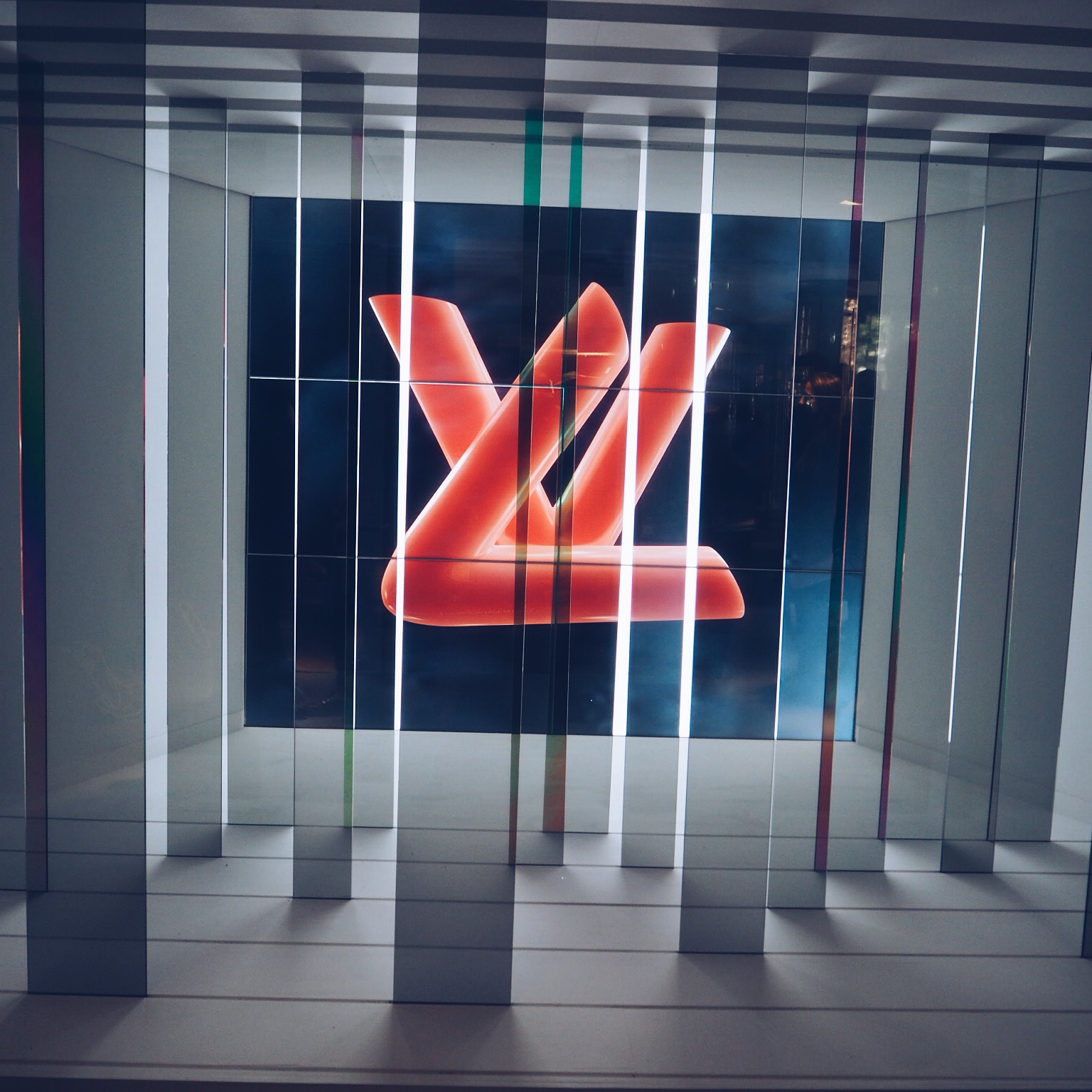 Overheard: “If I see one more Helmet Lang or JW Anderson reference on a mood board…” Yeah, I have to agree. It’s boring when designers are inspired by other designers. Palmer / Harding took their cue instead from artist Nathan Peter, whose cross paintings were translated as sheer cutouts in a mannish shirt. Their gauzy layered shirt dress was another big highlight. 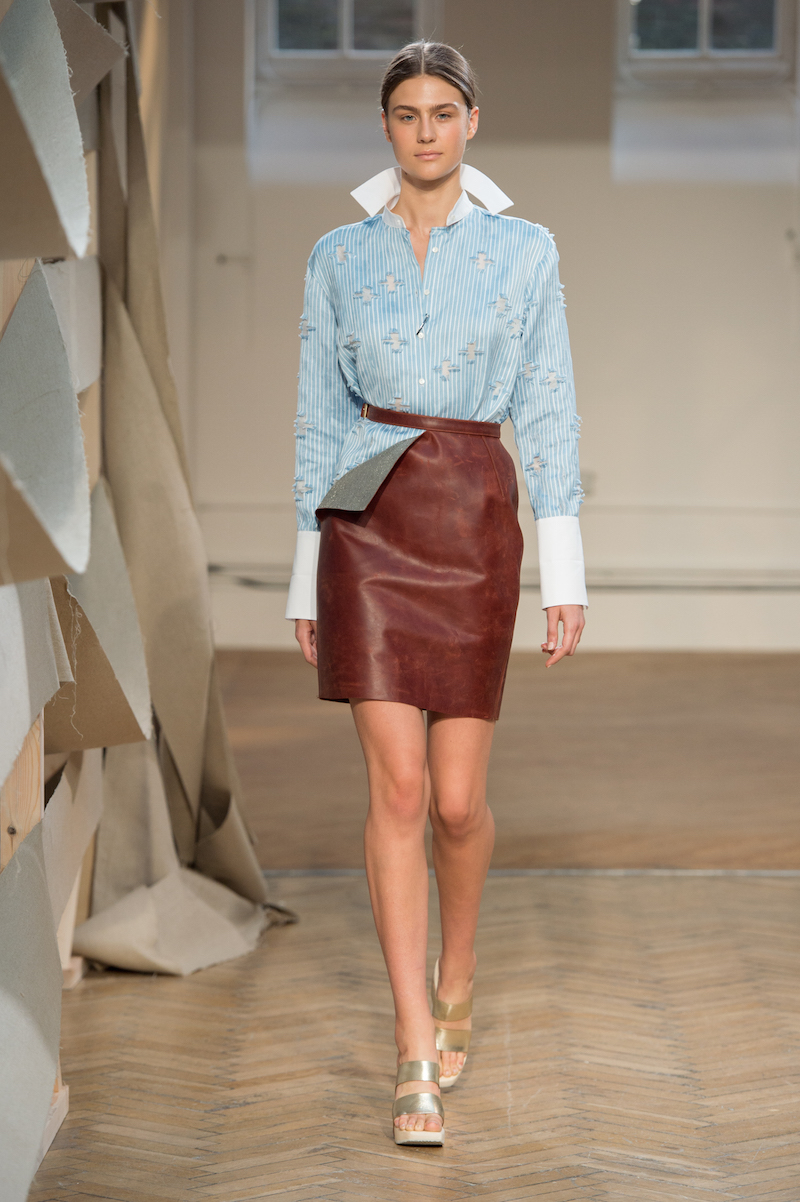 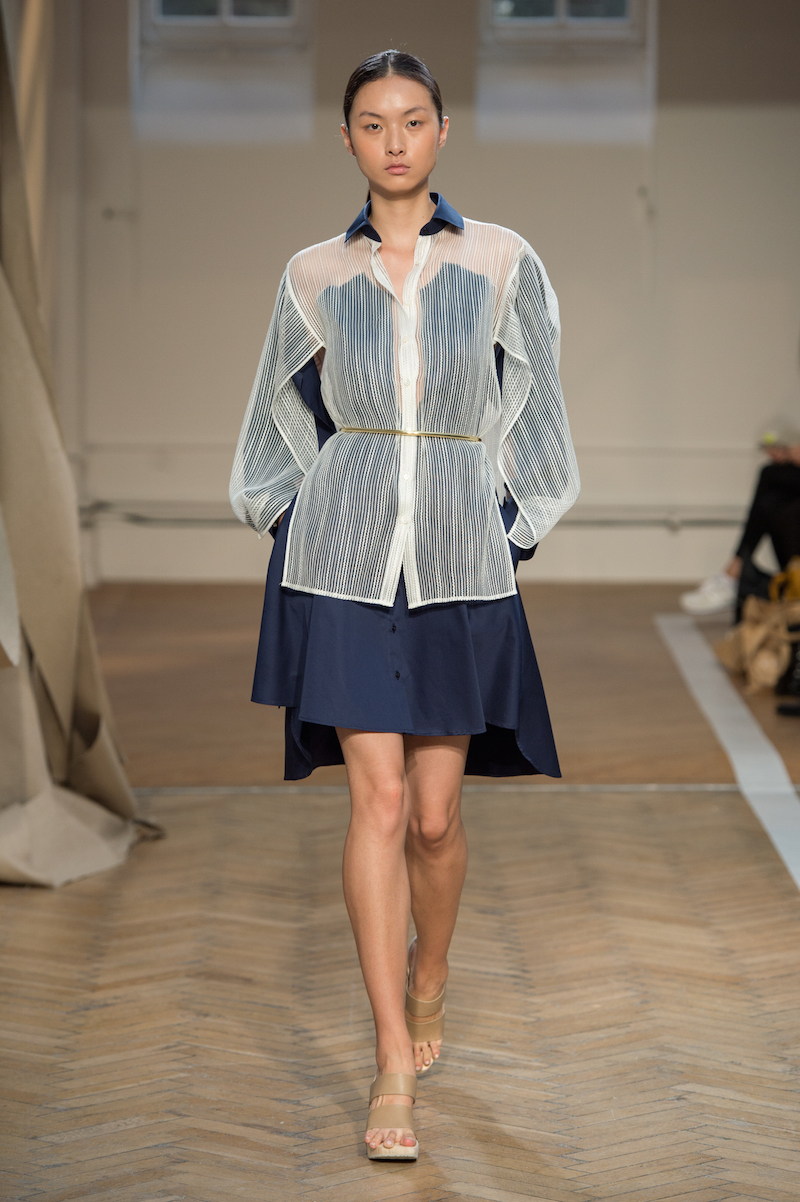 Hasn’t there been a lot of huffing and puffing about the inconvenience of the new venue! Having moved from the genteel Somerset House to a car park (the horror!) in Soho, I get that it’s a culture shock but I still think it’s great to offer overseas visitors a look at the real London, you know, before it disappears under an onslaught of non-dom luxury flats.

Anyway, I’m slightly less inconvenienced than most, thanks to the loan of a wonderful VIP Mercedes office-on-wheel – complete with charging sockets, blacked-out windows and saintly driver, Steve… 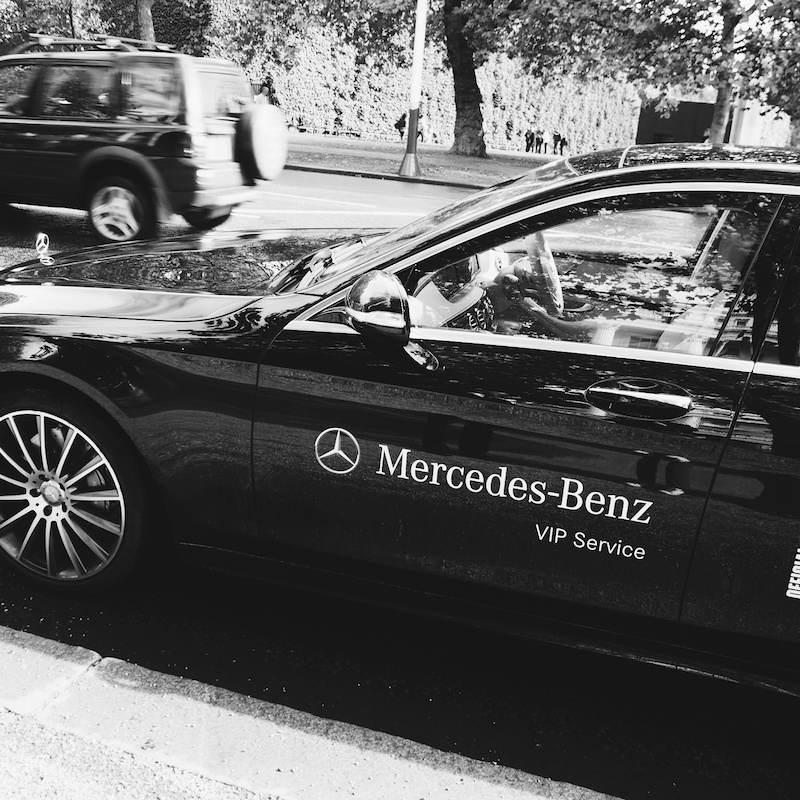 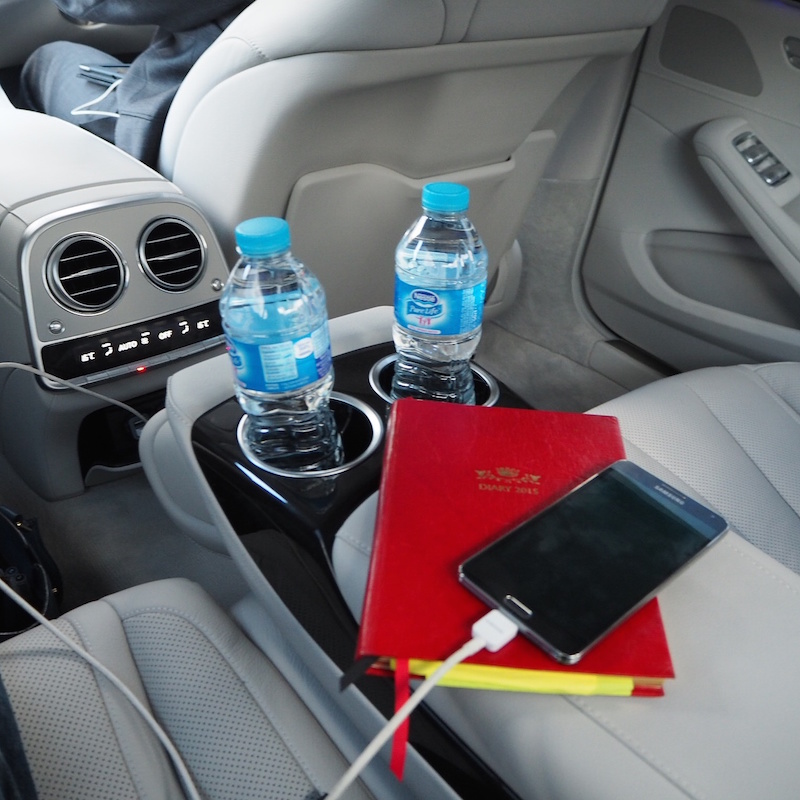 Said Mercedes chariot made the Saturday morning 9am start for Mother of Pearl a whole lot more bearable, and the show was my favourite from MOP yet. Amy Powney has ushered things forward a bit with a softer romance to her signature sporty silhouette. Suggesting ‘Victoriana through an 80s lens’, she gave us lots of pie-crust frills, ruffle front sweatshirts, a leather coat with sleeves that tie in a bow, and the sweetest of boater hats. It all looked absolutely wearable and not as twee as it sounds. The Sibling show was bittersweet, dedicated as it was to the recently departed third sibling Joe Bates (aka, one of the good guys of fashion). But it was really quite a jolly romp of crochet bikinis and animal prints, with a finale of happy clappiness that was heartwarming and cheering. 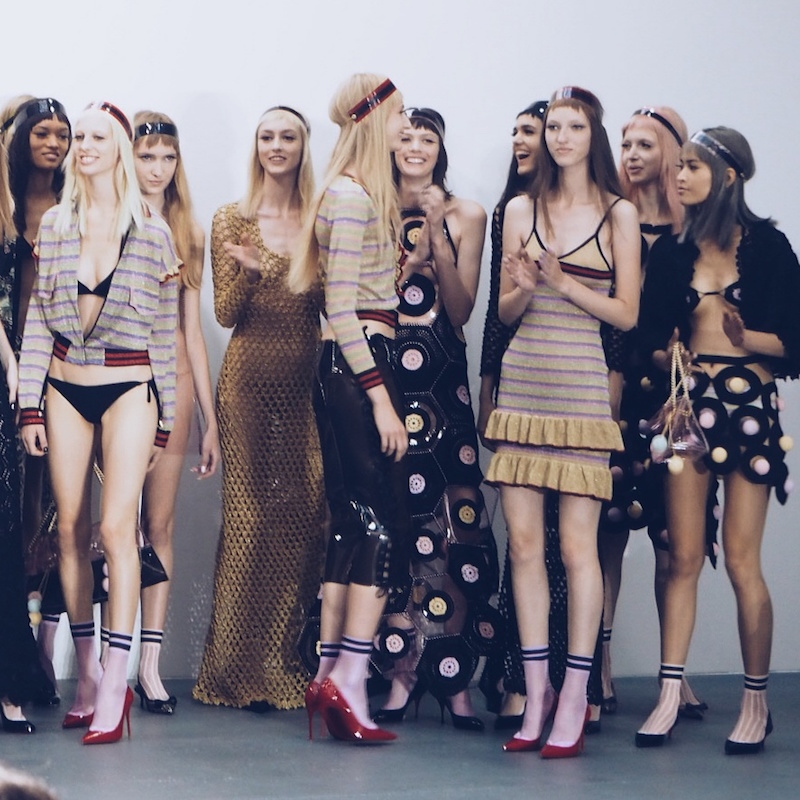 J W Anderson is a show I find hard to evaluate if I haven’t watched it live. I like to have all the components to get the full effect. But early impressions are good. Genuine newness and WTF-ness is what I like from a show. Although I appreciated the supersized proportions of his leg-o-mutton dresses I love the look of these simpler piped pyjamas. Also, please can we take a minute to appreciate the magnificent bowl head… Simone Rocha sometimes looks like an amalgam of Prada and Comme but I guess there are worse people to be compared to. I like the wrongness of her brown spangled dresses – although I hate to say it but I can detect a whiff of Helmut here too… 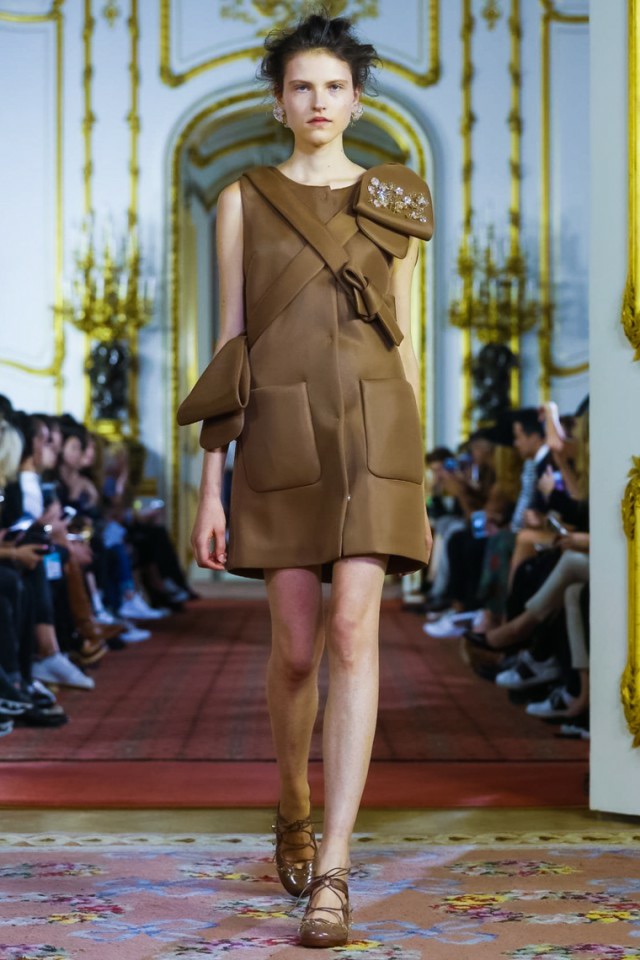 With thanks to Mercedes-Benz