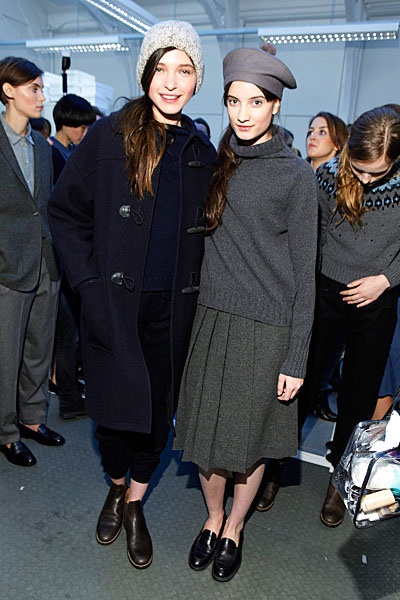 I tried to keep this brief but it didn’t happen so here goes. First up: Margaret Howell. You don’t get many surprises here but that’s OK. With some designers I like to know what I’m getting and for AW12 we’re getting the perfect white shirt, trad fairisles, fitted twinsets, schoolgirl box-pleated skirts, indestructable tweed trench coats (an update on my navy wool one that kept the biting chill out all weekend) and boyish blazers. To finish off – low side ponytails, penny loafers and darling little olive green Tam-o-shanter hats. 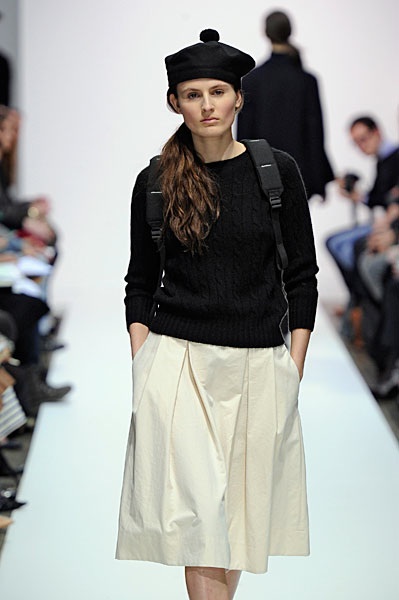 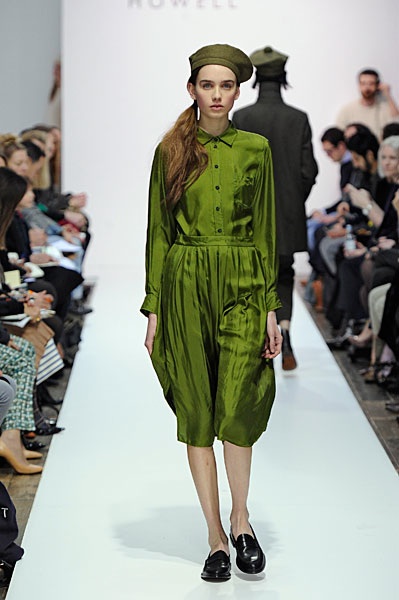 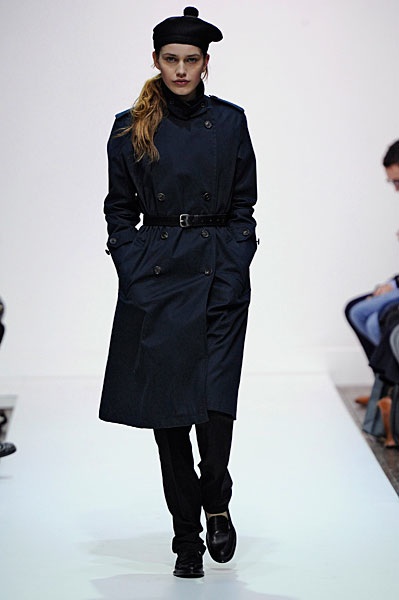 Post-Margaret Howell, I snuck off for a couple of hours to have breakfast in my New Secret Favourite Cafe where I feasted on delicious Mini Magoo porridge and endless capuccinos while I read The Daily (read what I think of iPad catwalk photography here!) and caught up with Twitter 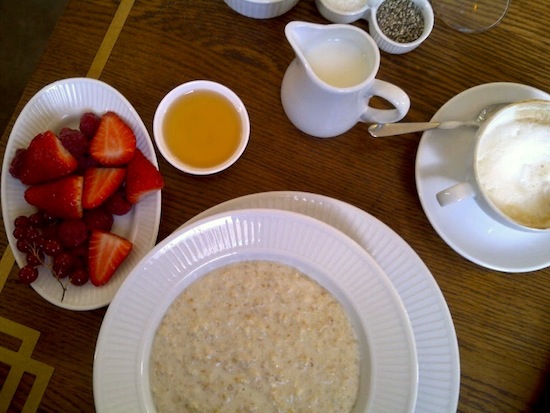 Thomas Tait may be only 24 but he’s already being feted for his mature approach to womenswear. His much-hyped AW12 collection focuses on real problem-solving design rather than just creating pretty dresses so it’s all about the cut and construction. The result was a collection of highly polished separates in the vein of a Celine or an Hermes. In particular, his outerwear is getting lots of love and for AW12 he sees us in luxe high collared jackets and spare cocoon-shaped coats. 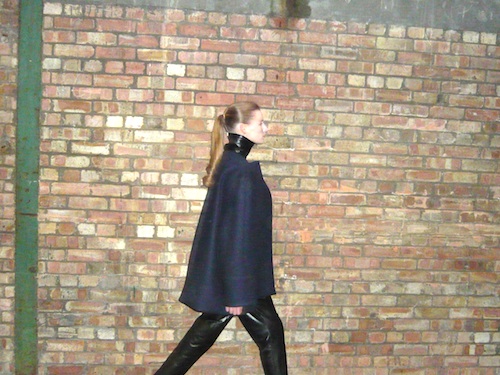 J.W. Anderson is another one with all eyes upon him. Like Tait, he is similarly savvy and forward-thinking in his approach – not surprising when you remember that he learned his trade as a visual merchandiser for Prada under Manuela Pavesi. Anderson’s reaction to London’s recent print overdose is to concentrate on texture, shape and innovative fabrics (do read this piece by Melanie Rickey). These tweed-look skirts below are actually made of felted neoprene while his dogtooth prints are made from special Swarovski ‘incandescent laser-cut Crystal Fabric’ (their capitals). While his waffle jumpers and structured skirts are easy on the eye when seen on a rail, Anderson’s styling comes from the Prada school of jarring wrongness which accounts for these fugly flatform loafers. What I like about Anderson (and I finally get about Meadham Kirchhoff who show tomorrow) is that they’re absolutely true to themselves. Anderson goes with his gut and doesn’t bend to outside influence. I think that comes across and it’s really exciting and inspiring. 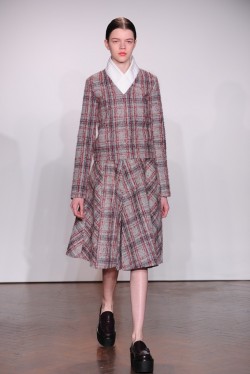 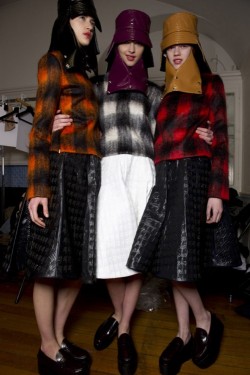 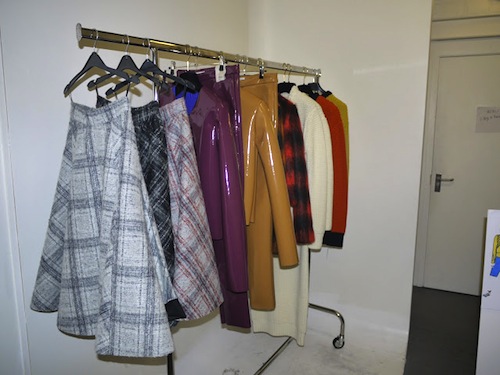 This is surely going to go down as the season when London Fashion Week reached its tipping point on the tech front. From Harrods’ ‘you be the buyer’ initiative with Burberry (‘Like’ your favourite Burberry outfit on the Harrods Facebook page and you can influence the pieces that Harrods buys for next season) to the FashionGPS Fashiontaxis scheme (where select fashion editors can reserve a cab to specific shows by tweeting @FashionGPS), technology has never been so cool. Key LFW sponsor Vodafone has really raised the bar though with its insanely useful front row tech-charging sockets stashed in drawers under the seats. (Alas no-one seems to be using them, maybe they would be more useful in the back rows?) Even better, yesterday saw the unveiling of Vodafone and Richard Nicoll’s handbag collaboration that I really hope has legs beyond this project. The white tote bag has a genius inbuilt phone charger making it the ultimate power accessory. Note to Vodafone, can you invent a bag that answers my emails please? 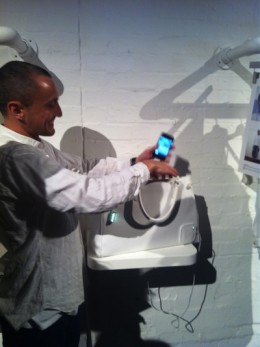 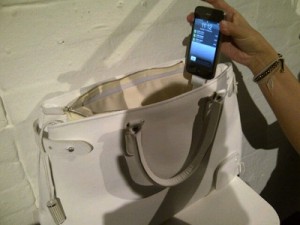 But wait, that’s not the only desirable handbag launch. yesterday also saw the big unveiling of Mulberry’s new darling, the Del Rey bag named after you-know-who. Here she is posing with it. (What’s the deal with white handbags though – did I miss something?) 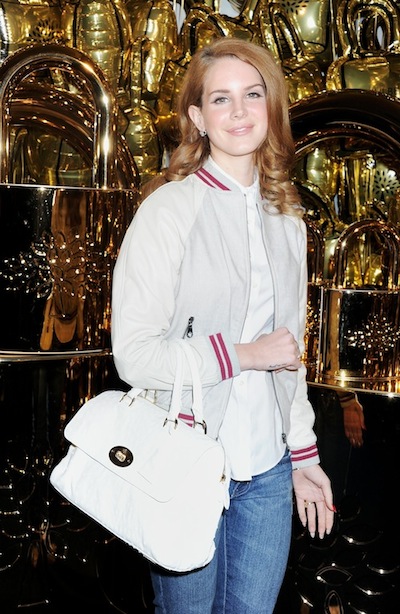 Meanwhile, on my rounds navigating the static exhibition, I heard a great story from bag designer Amelia Powers. This designer met work minister Iain Duncan Smith at London Fashion Week last season where he was quite taken with her brand and her obvious passion for design and craft. (I must admit, having just met her it’s not hard to see why. “I want to be the British Hermes”, she told me.) IDS then called a cabinet meeting and is now in the throes of a campaign to get handbag manufacturing brought back to the UK, using Powers as an example. These bags are the real deal. Selling at £850-£3000, each one takes 2-3 days to cut by hand and they’re as functional as they’re fancy with enough space for an iPad or a laptop. 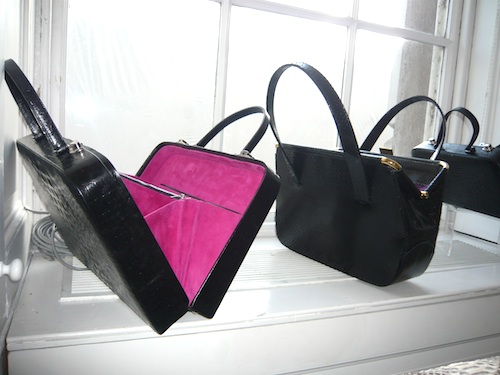 Yesterday’s overriding beauty trend was the ponytail in all its guises. From low side ponies at Margaret Howell, to mid-position ponytails at Thomas Tait (complete with velvet scrunchies #notevenjoking) and strict linear ponies at Jonathan Saunders, it can go as high or low maintenance as you like. 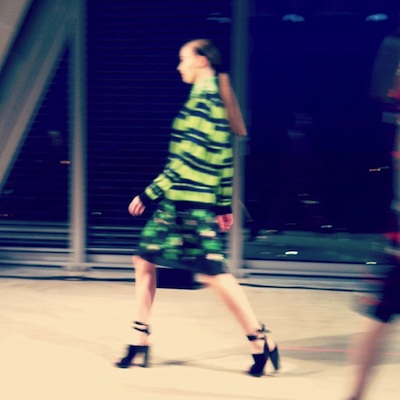 My last show of the day was Louise Gray and this was a show in the proper sense of the word. A killer house music soundtrack from Hanna Hanra scored the abstract pattern-clash layers and hi-rise hair extensions. As the press notes said, the show was about “everything, all the time.” Alas, the hair got all the attention from me so I’ll have to have a closer look at the clothes on the stand. As a show though, it was fantastic, maximum-energy fun. 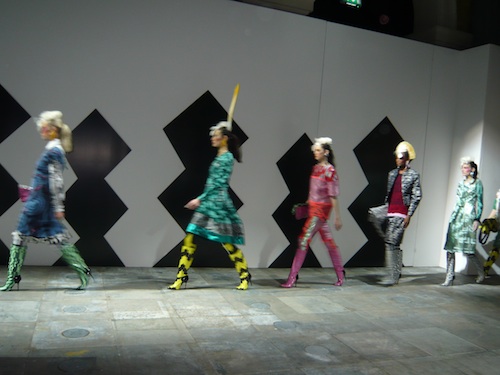 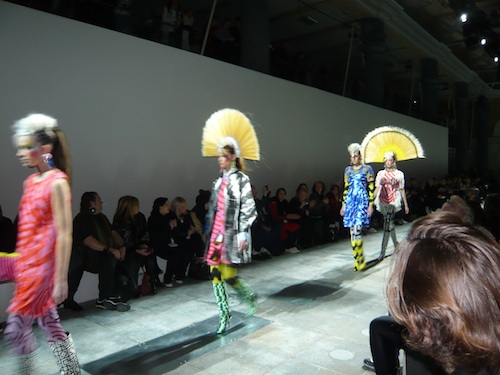