The dreaded Christmas jumper season is incoming and if there’s one thing I loathe, it’s novelty sweaters. If you want a standout sweater, why not design one yourself? It’s easier, and more affordable than you might think.

Just before London Fashion Week, I got the chance to explore the studios of Unmade, a pioneering London company doing radical things with knitwear. It really needs to be experienced to fully grasp the concept, so the best thing to do is log on to Unmade and try the service yourself.

Key to the design process is a unique digital customisation function. Unmade has ready-made designs created by its team and produced to order in its workshops in the bowels of Somerset House. As a small company, it can be nimble, offering a straight-to-the customer business model, adapting the design and knitting the finished article within minutes from industrial knitting machines on the premises.

If you like classic merino and cashmere sweaters in vibrant colours and geometric graphics, then these will appeal. There are colour blocks, repeat geometrics, bold stripes and abstract squiggles. And if you like things more understated, there are options for that too. 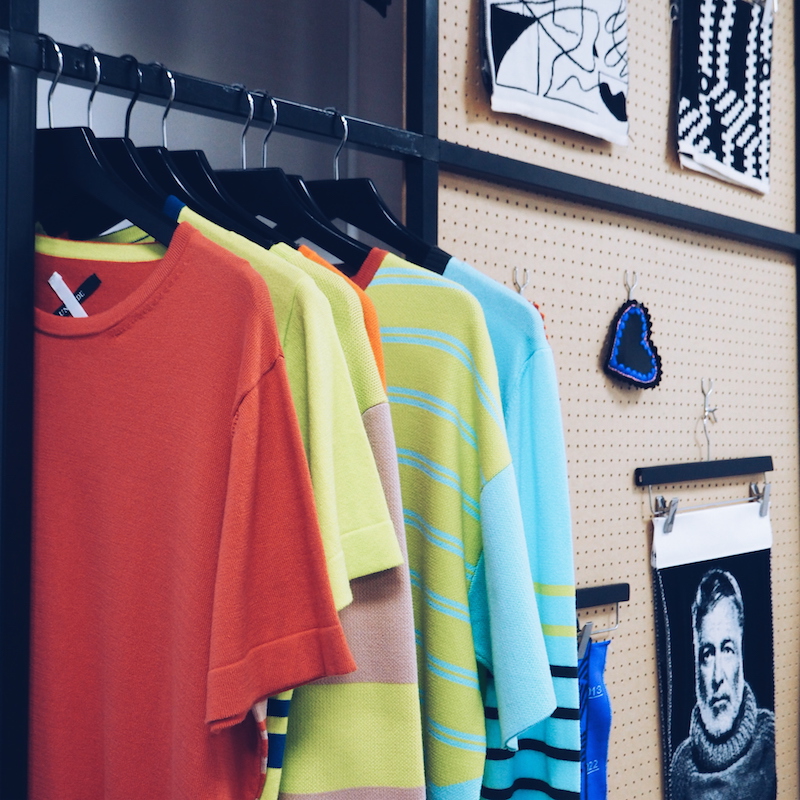 When I visited, Unmade’s creative director Ben Alun-Jones gave me a demo on his iPad of how the customisation element works. Choosing a ready-made design, you use you mouse or finger to disrupt or reposition the surface pattern. It’s astonishing and playful to watch and of course the permutations are endless. You can play safe and just slightly tweak the patterns, or you can go crazy creating psychedelic extravaganzas to your heart’s content. The silhouettes are unchangeable, but the surface design is as limitless as your creative vision. 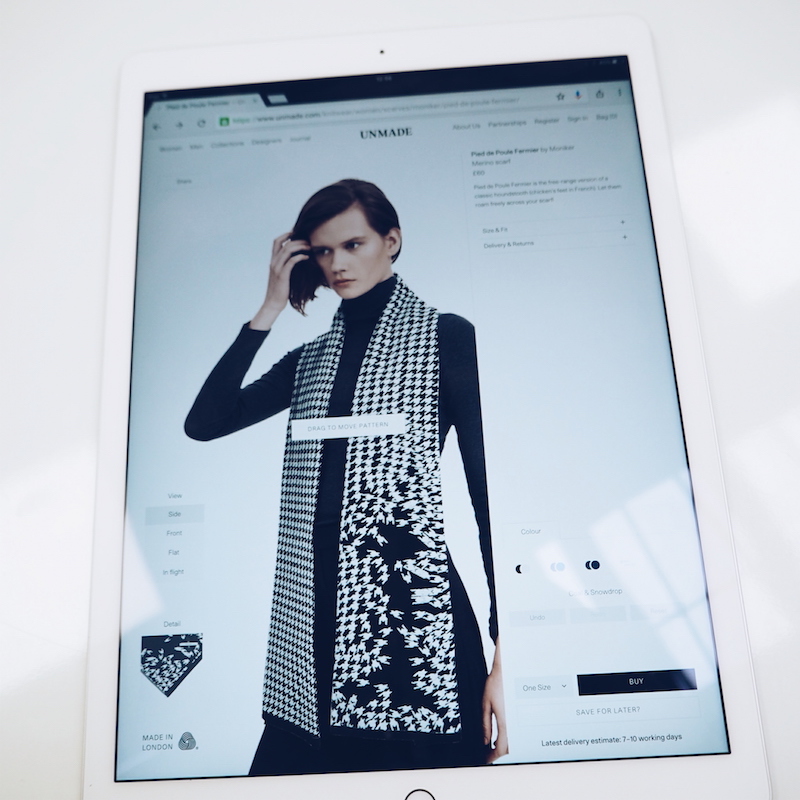 What prompted this revolutionary concept was not a desire for avant-garde creativity however, but a frustration with our voracious consumption habits. The three co-founders, Alun-Jones, plus fashion director Kirsty Emery and CEO Hal Watts met at the Royal College of Art and after stints working on other design projects (for example, the series of robotic musical instruments that Alun-Jones created a for Will.i.am), decided that there was something inherently flawed in the way fashion is produced and that they were the people to fix it.

The fashion industry has been acknowledged as the second most pollutive industry after oil. 10% of what’s produced ends up in landfill, often unworn. Unmade’s model means each piece is made on demand, with input from the customer. For the user-generated content generation it’s only a small step to user-generated clothing and research has shown that when we have a hand in creating something, we tend to value it more.

The result is very little waste; there’s no deadstock and return levels are low. Yarn is bought in small amounts to avoid waste, although that can push the price up. But Unmade has adjusted its price point, by lowering its margins and passing the saving to the customer. 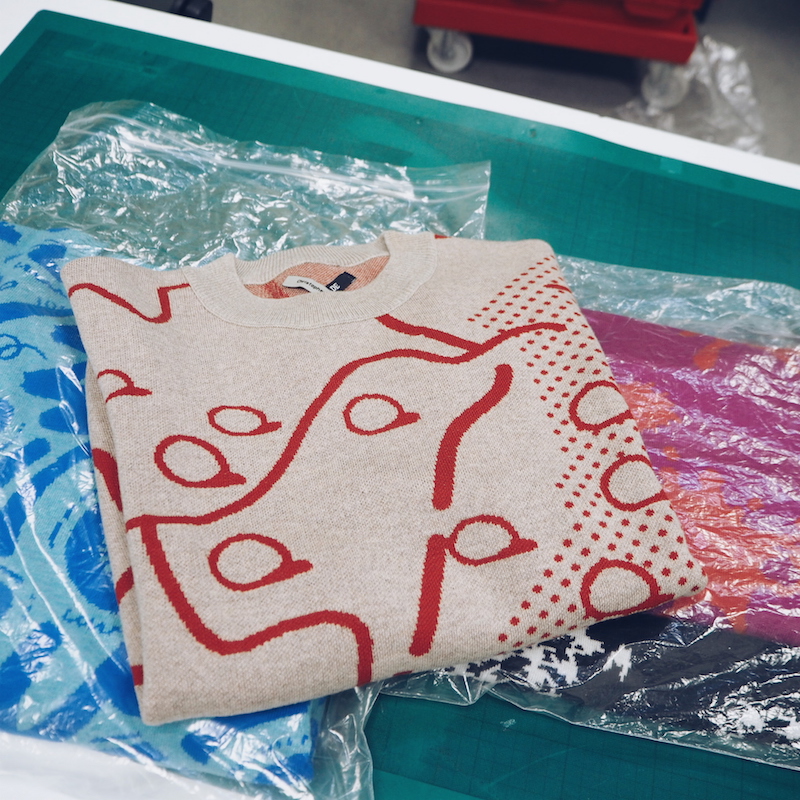 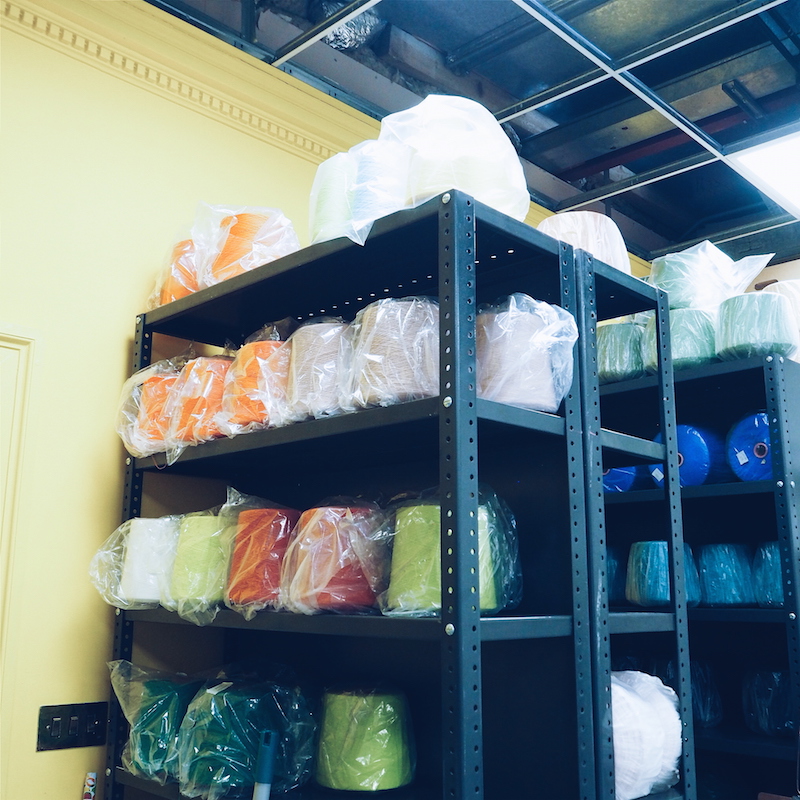 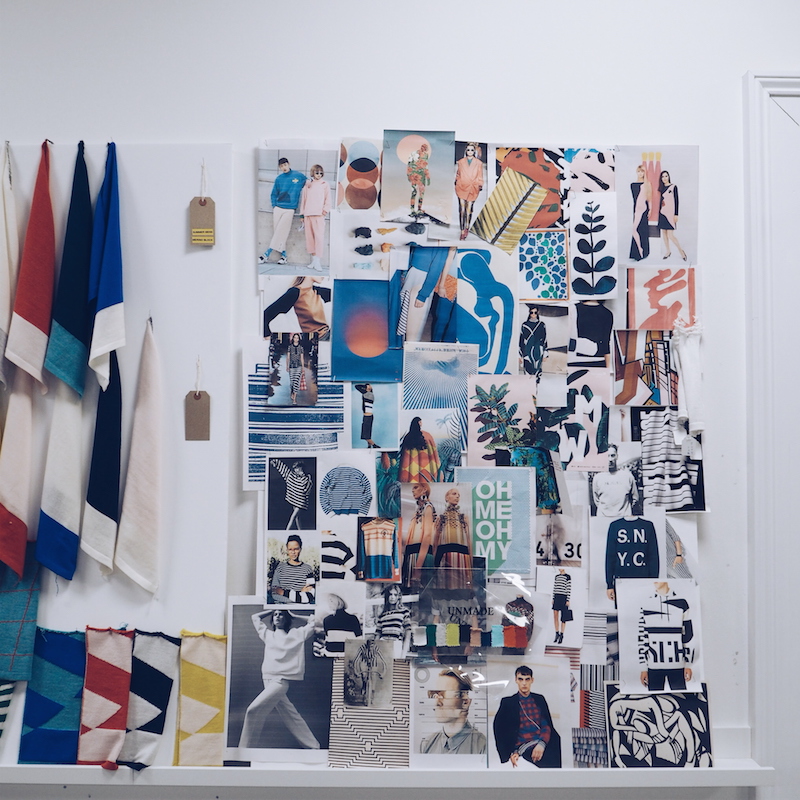 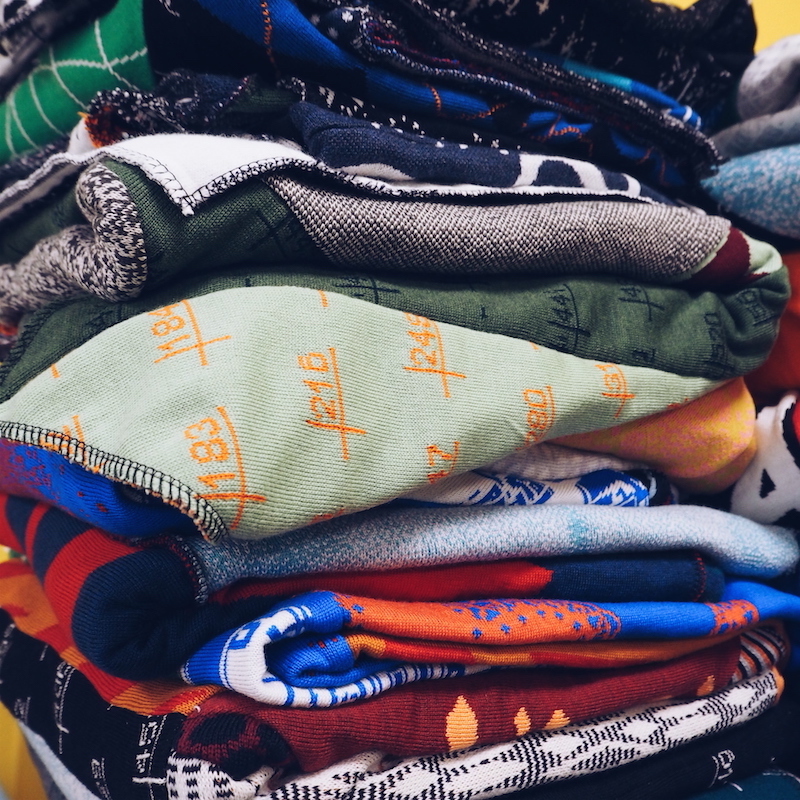 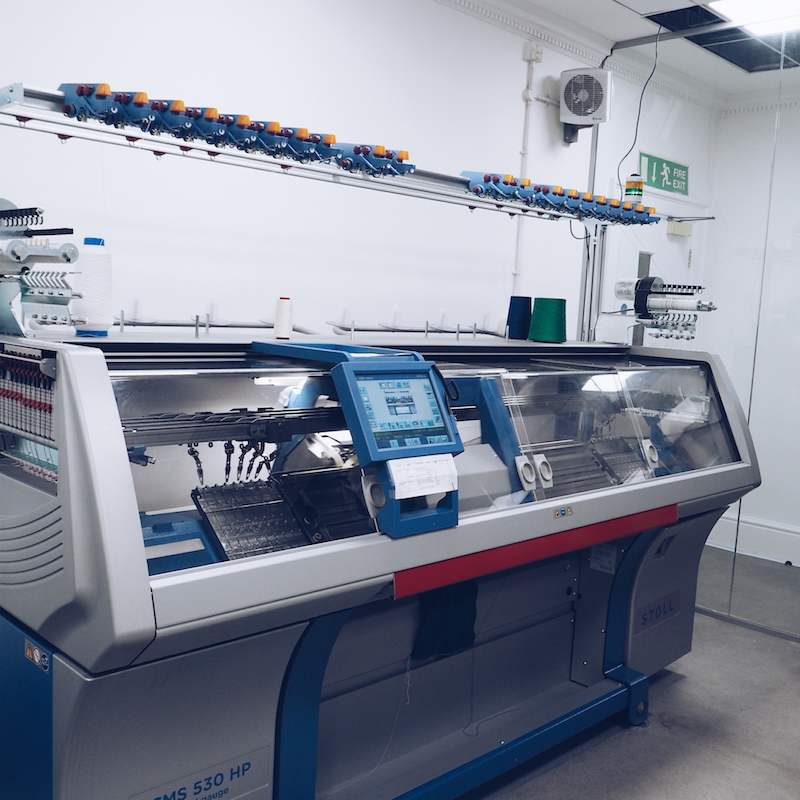 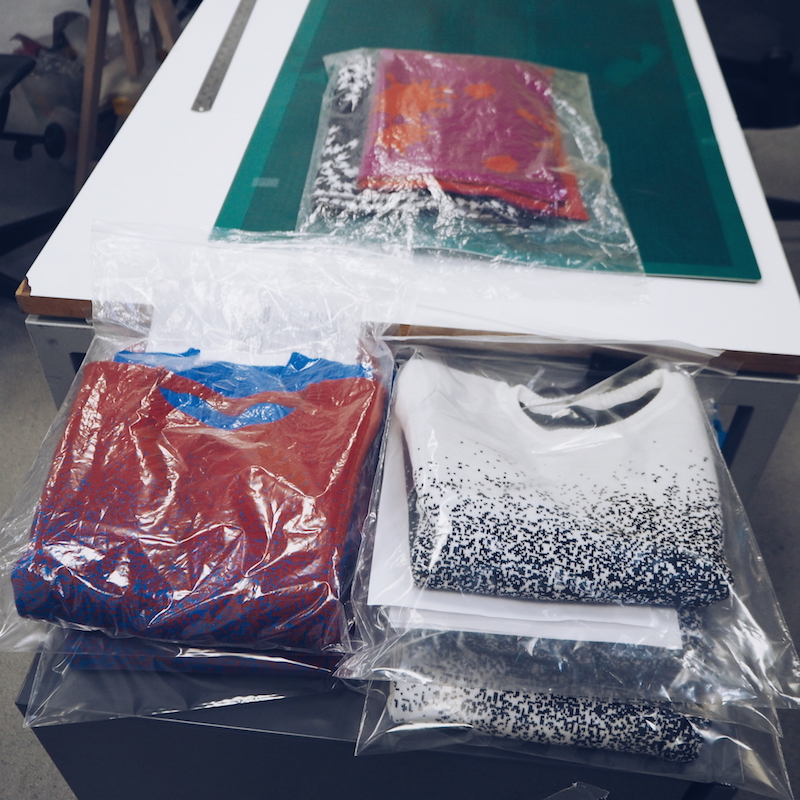 If you’re thinking that so far this all sounds very clever and impressive, there’s more. Unmade is fiercely ambitious and doesn’t see this as the end point. This is where collaboration comes in. In order to scale, it has been meeting with luxury brands and designers to widen the scope of opportunity. As Alun-Jones told me, “the goal was always to work with brands. One of the reasons to collaborate with brands is to make an impact.” There’s also an impressive team of investors in place. Edoardo Zegna was an early backer, as were Farfetch CEO Jose Neves and Net-a-Porter investor Carmen Busquets.

While recent collaborations have included designers like Christopher Raeburn and Kate Moross, its first collabs were with digital artists and hinged on how to make patterns. In the Unmade studios this can be evidenced by the sight of the tech team glued to screens, crunching code and solving mathematical puzzles. I can imagine many nights – if nor weeks – of frustrated hair pulling, although let’s not pretend these guys don’t thrive on the challenge. As with all innovation, it’s the trial-and-error, the ‘oh no!’ moments followed by the ‘a-ha!’ that drives them. “It’s the belief that we’re right,” says Alun-Jones. “Jose Neves and Zegna instantly got it. Other people have been harder to convince, often because they don’t have the time to understand.” 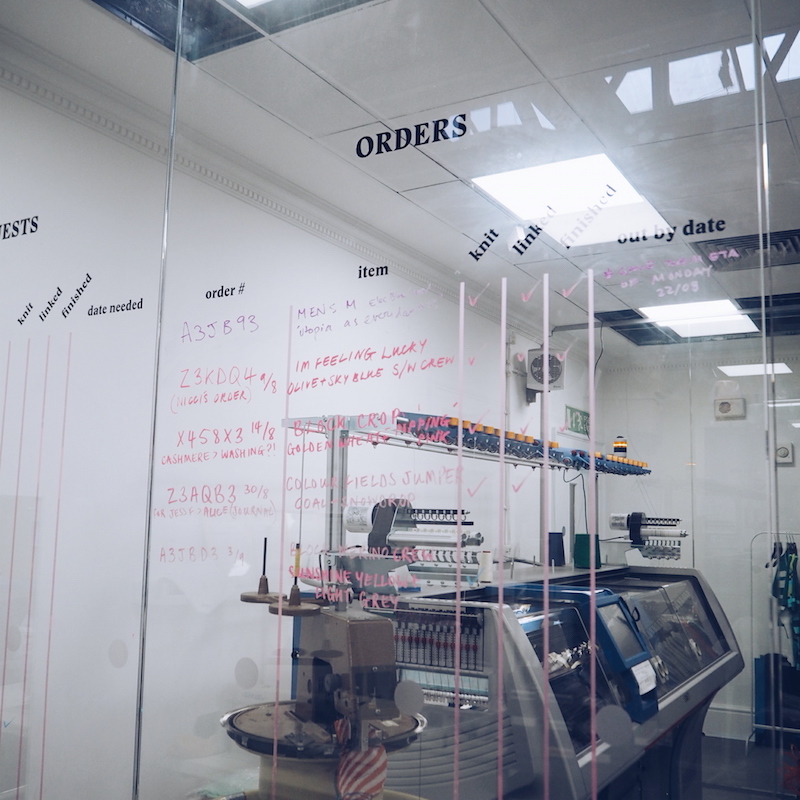 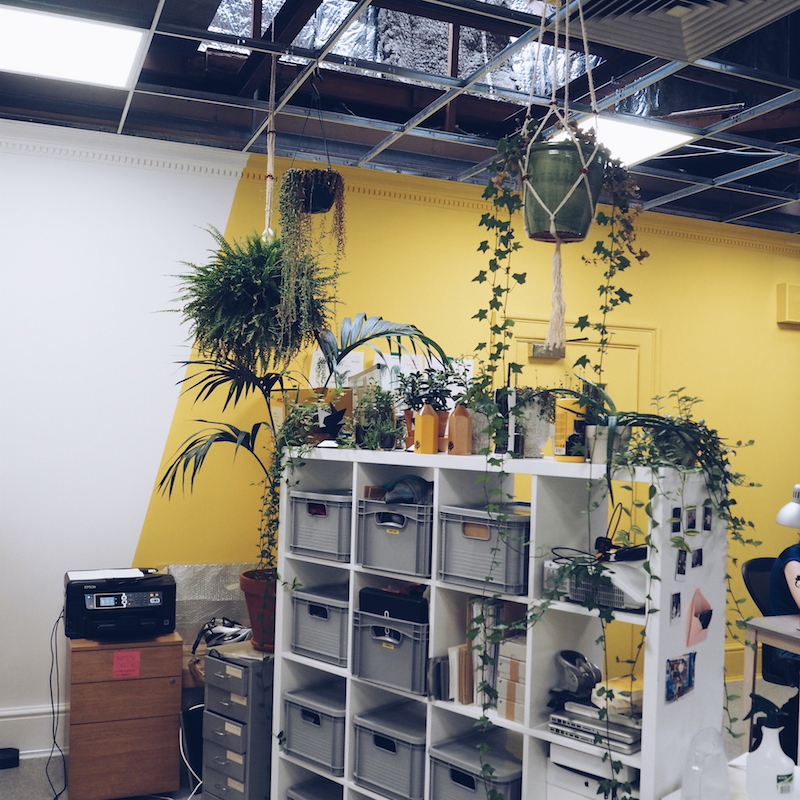 Especially in our speedy culture. So the latest chapter of the Unmade story is a particularly exciting one, a collaboration with Farfetch and Opening Ceremony. Launched last week, the Opening Ceremony X UMD capsule collection (below) lets customers customise classic Opening Ceremony sweaters, beanies and shrugs using Unmade’s unique technology via the Farfetch platform. Plus there’s the option to add specially designed typographic initials for further personalisation. 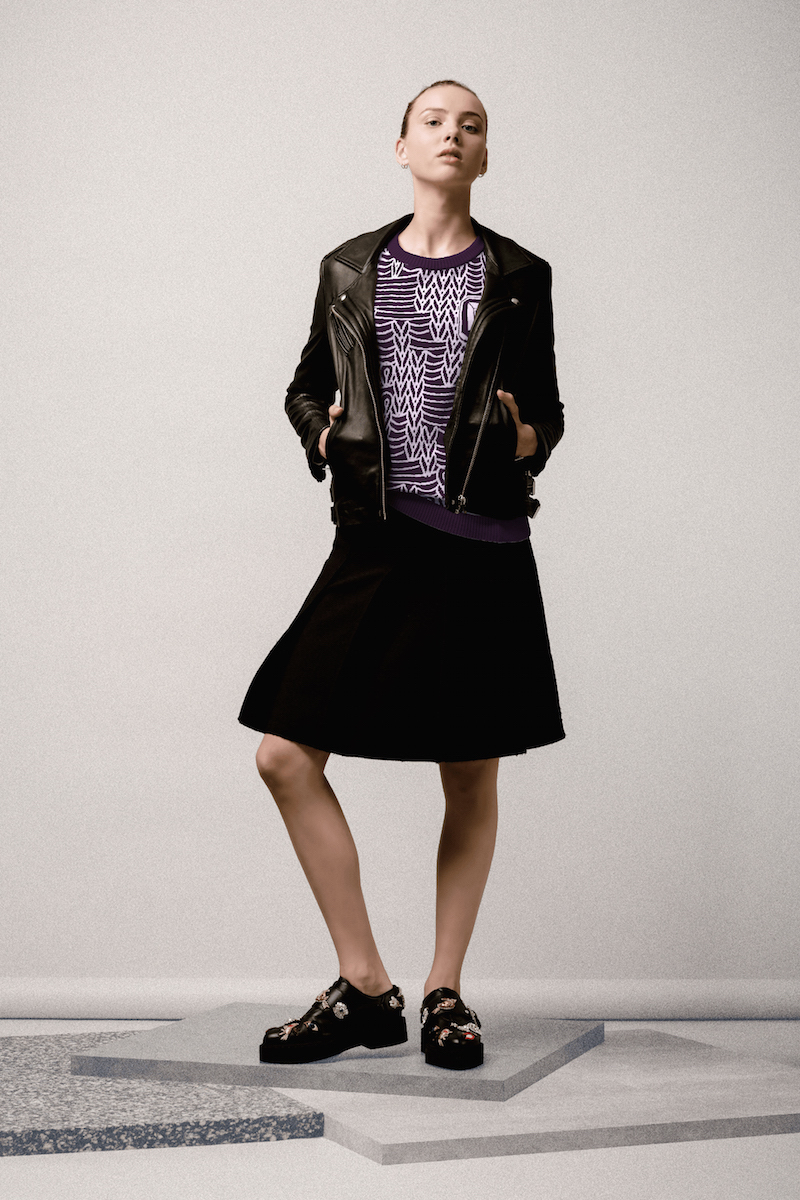 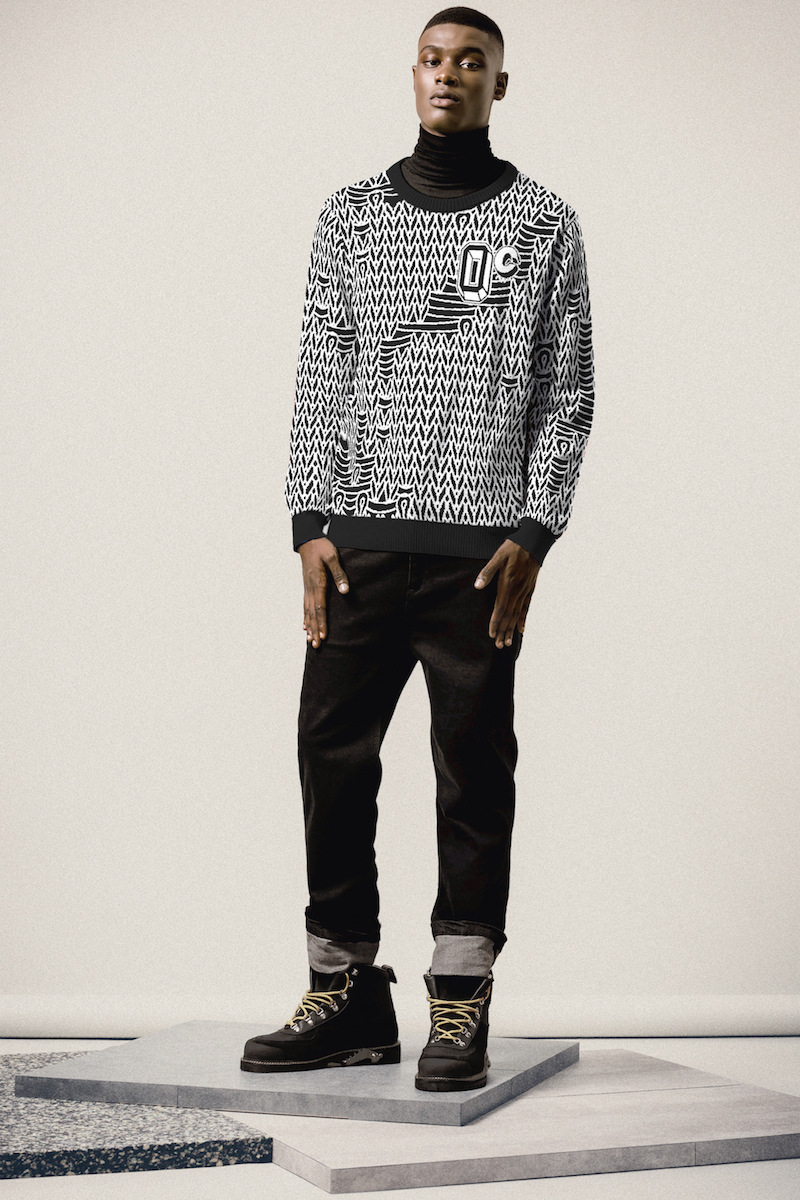 On a bigger scale to Unmade’s own offerings, this collection is produced in the Johnstons of Elgin mill in the Scottish borders and takes up to 4 weeks to deliver. Where 3D printing lags behind after an initial burst of activity a few years ago, the Unmade approach looks like it could be the one to bring mass personalisation to luxury brands. With interest already forthcoming from a number of undisclosed luxury titans, it seems the ball is already rolling.