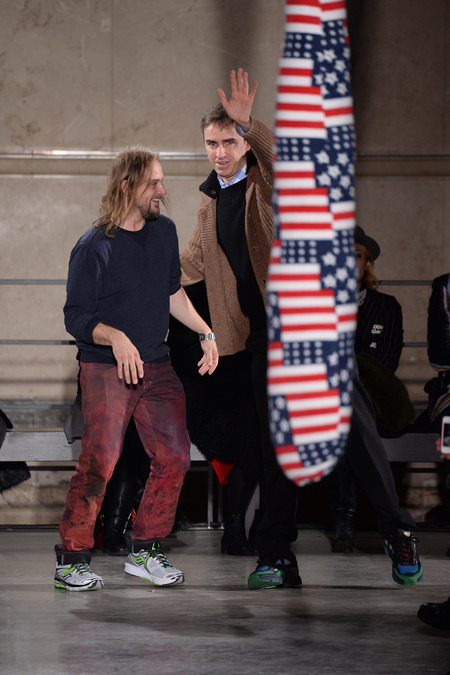 I could write a thesis-length post on Raf Simons and Sterling Ruby’s epic joint AW14 collection, but I won’t. Instead I recommend you read all about in Tim Blanks’ Style.com report. Or just enjoy the pictures. Suffice to say, the conceptual art student is alive and kicking on the catwalk and if you love collage, Pollock-meets-Clash paint splatters, Lichtenstein primary colours and provocative wordplay, then it’s all here for ya, wrapped up in dun-coloured cashmere and nubby tweed.

The labels that look like they *could* say Helmut Lang (yes, we’ all immediately read it as that) actually say ‘abus lang’. That’s shorthand for abusive language’ apparently but I’m happy to read a Helmut meaning into it too. Incidentally, Mr Lang is now a firmly established fine artist in his own right. Yes, there are lots of art-meets-fashion connections in this collection, I guess it’s what you call a Fashion Moment.

I have to also flag up the beyond fugly shoes. What a stroke of genius. Without them, you have an incredibly strong, meaningful yet utterly commercial collection. Add the bulbous, cartoon shoes and you have just the right amount of wrongness to make this season-defining. Ok I’d better stop there… 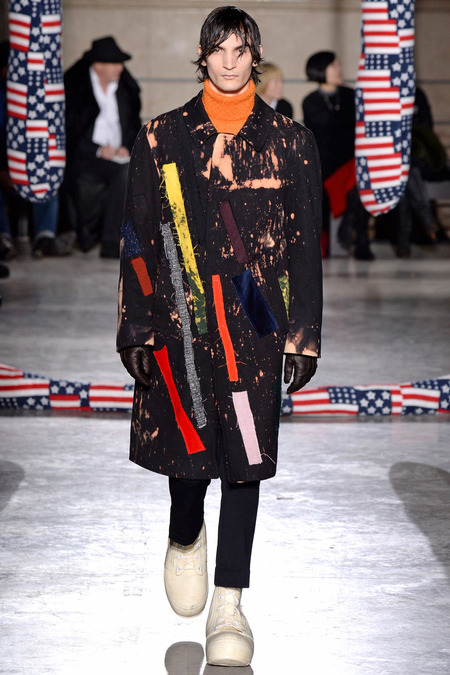 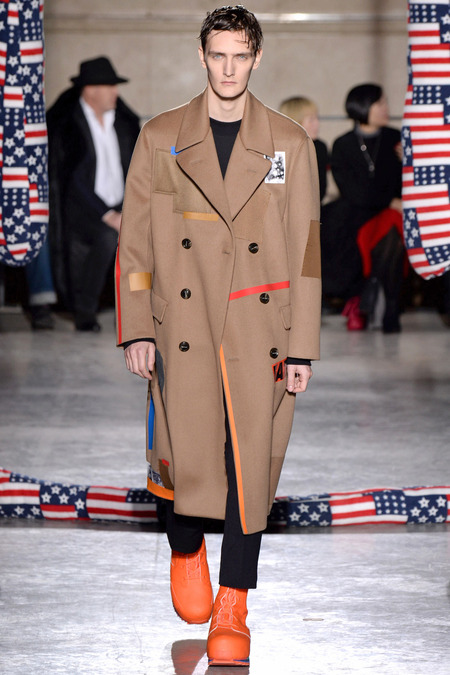 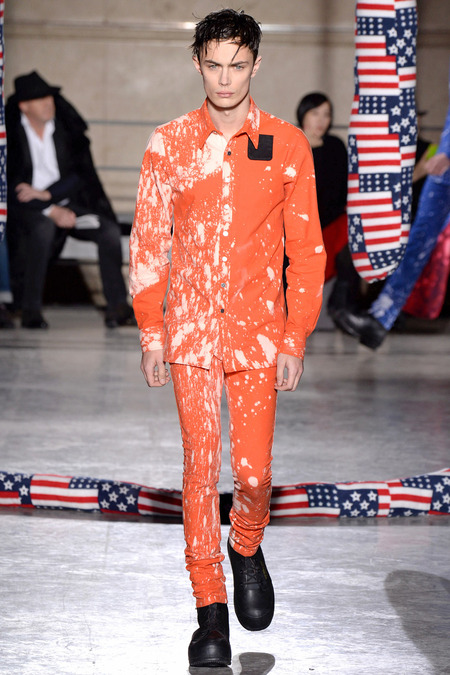 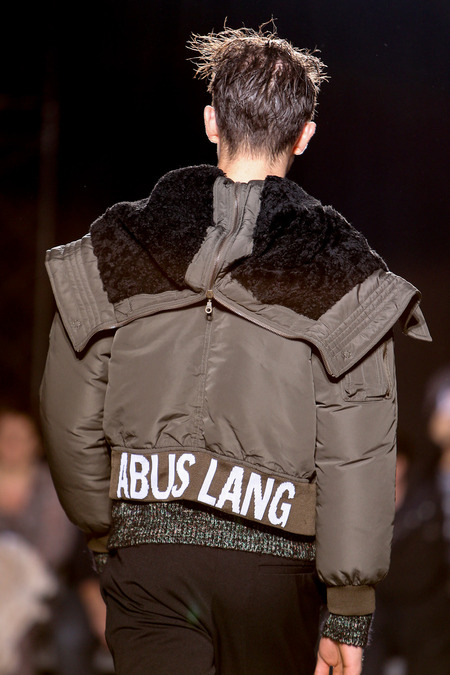 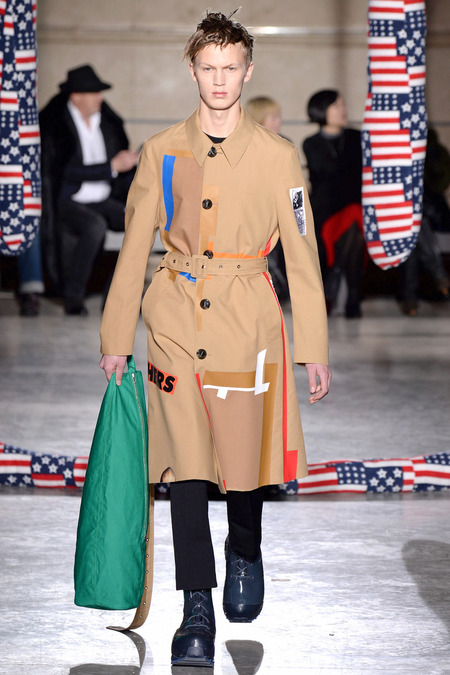 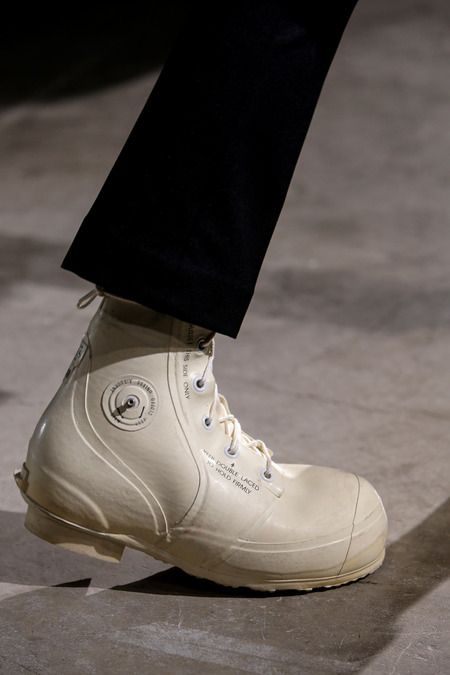 However, this won’t land for another six months. (Interesting: would you rather have it now, Burberry-stylee, or does the wait actually make you want it more?) (*Update*: according to the FT, only five of each of the hand splattered coats will be produced and a museum has already ordered one.)

If you’re dying to get your Paris-fashion-art-student look on earlier, there’s an alternative. Fittingly, it comes from Westwood. It’s a rather ace collab between Vivienne Westwood and Gloverall, in which the original Gloverall Wartime Monty Duffle is covered in Climate Revolution manifesto slogans and patches as part of Vivienne Westwood’s eco-awareness project. Highlighting British craftsmanship and traditional production techniques, there are also double-faced tartan versions covered with hand-drawn printed graffiti. The duffles can be bought at the Vivienne Westwood store in Conduit Street or online (although they’re currently out of stock online but you can leave an email for them to notify you when they’re back in). 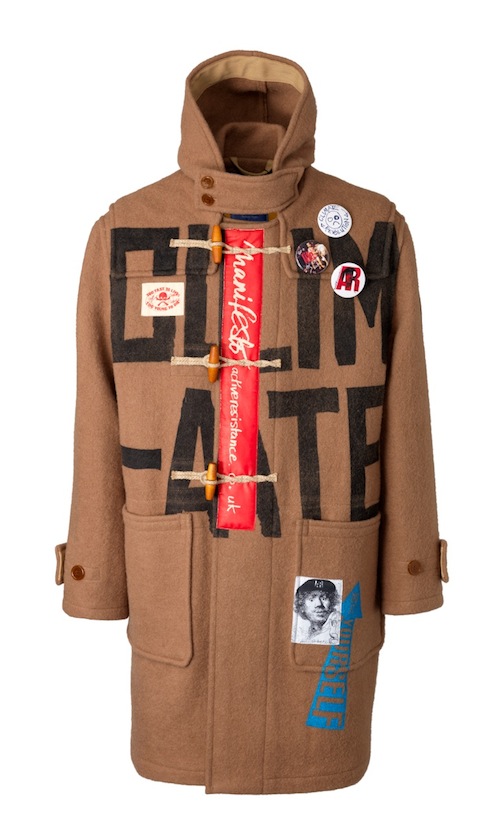