Feature: How fashion influencers are disrupting the modelling industry But then I remind myself that it’s nearly 25 years later and the fashion industry itself has undergone its own metamorphosis. No longer a trade industry for the insider few, the fashion business has morphed into the entertainment business and the dominance of Twitter and Instagram has turned the media from mass to micro.

The Victoria’s Secret phenomenon is the obvious example of fashion’s immense reach. Its last show was broadcast to 10 million Americans on mainstream TV, relentlessly supplemented by weeks of pre- and post-show editorial, mostly focused on the models, their prepping routines, their social feeds and their beauty secrets. Because models are now public figures, through whose personalities the masses consume fashion. 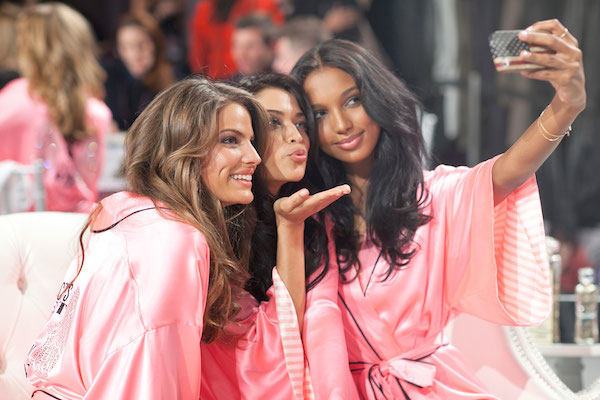 Not surprisingly, this all-access to fashion models has disrupted the workings of the modelling industry in a big way. Where once it was enough to look fantastic and turn up on set, the model’s job today is a 24-7 exercise in self-branding. Models – with their agencies’ help – are curating their identities with attention to every detail. The model-off-duty outfit, the Instagram feed, even the friendships they cultivate are carefully constructed for maximum effect. Frankly it must be exhausting.

The Hive Management is a new London agency run by Laura Murphy, representing British and international models. Murphy was a founder of Union Models, before launching The Hive last year alongside Nicole Kersh and James Mac. The agency prides itself on its bespoke approach, working strategically with girls it believes in to carve a defined path. Its team of five includes Matthew Bell, a bookings assistant who doubles as the agency’s social media editor.

“Before we launched the agency, we recruited specifically for Matthew’s role to look after the social media because it is so important,” says Murphy when I visit the agency’s offices in King’s Cross’s Tileyard Studios. “The Hive’s Instagram is all different things; editorials, a set of Polaroids of the girls when they come in – everyone loves these. We keep it fun and light. We’re trying to connect it all together so we tag the girls in as a team. We try to make us feel like a group, a family.”

Not everyone is a natural with social media and model agencies were fairly slow in catching up. But the social and editorial element is now a firm part of the agency day-to-day for The Hive. “If a girl’s not on Instagram we’ll encourage her to open an account. We advise her on how to get started and we’ll look at her pictures,” says Murphy, highlighting NYFW favourite, Sophia Ahrens as a recent example. “There’s a difference between models as models and how they use social media for their personal use. If they want to have a personal Instagram for their friends and family that’s fine, but they should have an official account too – it’s essential for building their brand,” 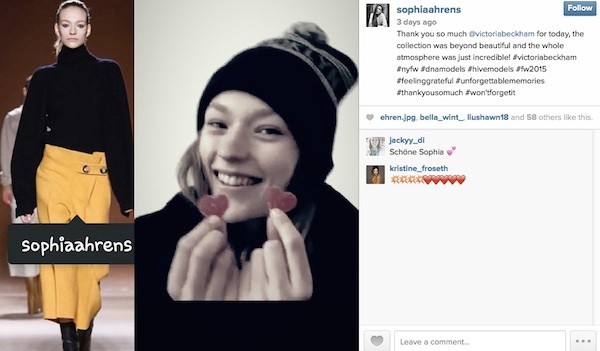 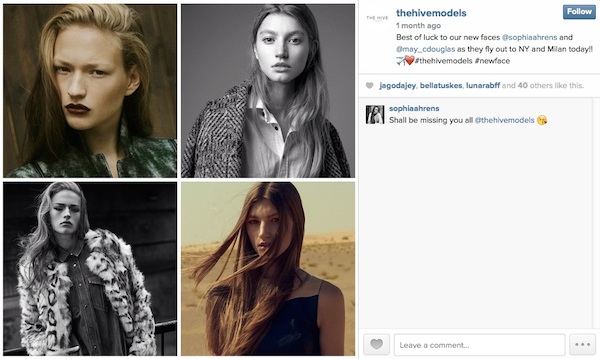 And it’s pretty much agreed that there’s an expectation for well-known models to have a social following, which boosts their currency. When Jourdan Dunn bagged her first Vogue cover, part of the buzz came from the model herself revealing it on Instagram. And there can’t be a single person who doesn’t believe that part of Kendall Jenner’s appeal to Estee Lauder was her combined Twitter and Instagram following of – I had to check this twice – 28 million.

Indeed, a big social following now commands extra negotiation. “I was recently speaking to a New York agent about it. In the beginning they were all very relaxed and ‘oh yeah, throw it in for free.’ But now they’ve realised that you’ve got to rethink the fee structure and if you want to include social media then we really have to figure out a rate for that,” says Murphy. “’How many tweets do you want? How many Instagram posts?’ It’s much more controlled now. In the UK, clients are not as interested, they’re only just catching up.” 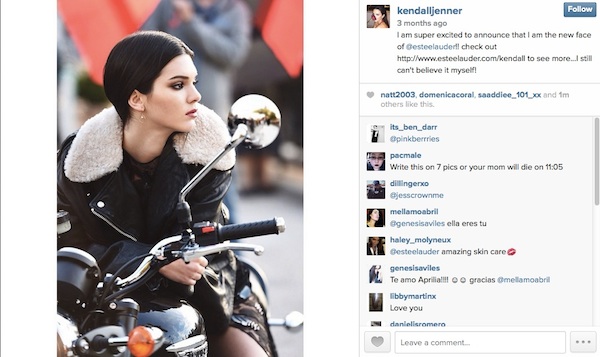 But even up and coming models are at an advantage if they already have an engaged audience to bring to the table. Last December, IMG Models set up its dedicated scouting Instagram account called We Love Your Genes, encouraging wannabe models to tag their Instas with the #wlyg hashtag to get discovered. It worked, with models such as Andrea Van Der Westhuizen being scouted on Instagram, in turn amassing a following from other aspiring models.

The @WeLoveYourGenes account has attracted 22,000 followers in only two months, a sign that this strategy works with its young demographic. “Instagram allows us to see potential models’ natural beauty in their everyday lives. They no longer have to spend lots of money on photo shoots or portfolios,” Jeni Rose, IMG’s VP of scouting explained to Fashionista.com. “Instead, they can come directly to us with simple smartphone snapshots and a lot of enthusiasm.” What’s becoming clear is the importance of personality, something that was lost in the post-supermodel 2000s. “There are many models in the world and these days you need to have something extra to make you stand out,” says Hannah Sneath, a booker from the women’s division of major London agency, Select. “Personality really does matter and it can take you a long way.”

Laura Murphy is also emphatic about this when we discuss Brit model Claudia Gould, a Hive model I cast in a shoot last year. “At 5ft 7.5 she’s not an obvious supermodel but her personality really shines through,” says Murphy. “It makes her a great model because she’s got something to say. She’s natural, funny and people want to be her friend straight away. She’s just interesting. She’ll ask you questions about yourself, and talks about her life outside modelling.”

And with the thirst for interesting characters comes diversity, with the fashion industry more open minded about embracing a model’s uniqueness. Scouting models online is all about the unexpected and comes with the added bonus of guaranteed exclusivity. By scouting for campaign models on Instagram for two seasons, Marc By Marc Jacobs has bagged itself models that are different from the norm and unlikely to show up in any other campaigns. 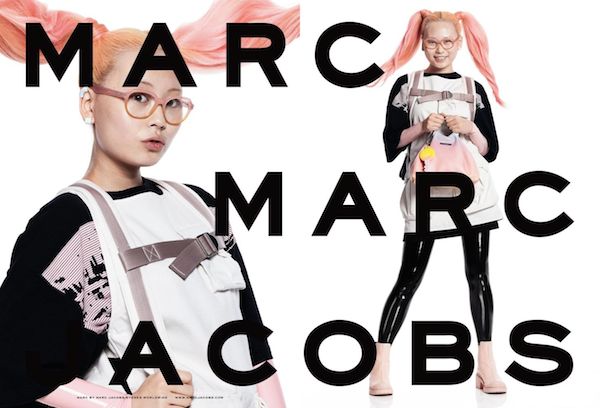 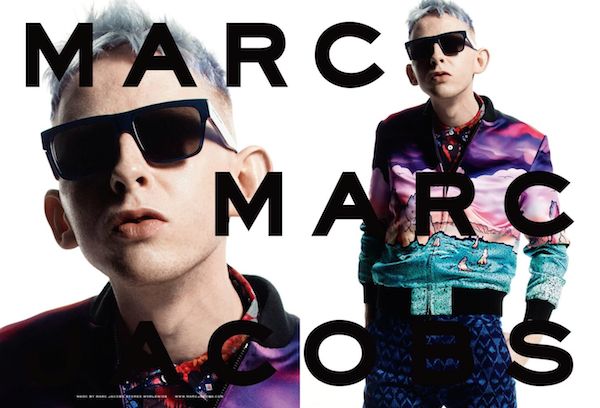 That said, the traditional way of scouting is far from obsolete. “At Select we are still old school and prefer for our scouts to go out and about on the streets or to special events scouting because it’s best for us to see the potential model in person,” says Select’s Hannah Sneath. “Whilst we keep up with current looks and trends by following the fashion weeks and models.com, we pride ourselves in discovering and projecting these new looks to the fashion industry. We are known for this and casting directors come to us to show them our new looks of girls.”

As with all things millennial and digital, there’s been another major shift in the way models operate; a have-a-go, entrepreneurial spirit that presents itself in the almost-cliché B-word. Yes, models are brands now. From Karlie Kloss and her ‘kookies’, to Cara and her allegedly trademarked name, the best models have to be business-minded and think beyond the catwalk. And as such, they can embrace whatever creative or commercial pursuits take their fancy. Especially when their not insignificant followings mean said projects get huge exposure to a ready-made global audience.

Expanding their skillset can also add credibility and a new dimension to a model’s output. Having dabbled with designing for Topshop and creating lipsticks for Rimmel, Kate Moss has gone on to style editorials for Vogue. Meanwhile, Karlie Kloss and Cara Delevingne have designed for Frame Denim and Mulberry respectively, while both Delevingne and Edie Campbell have appeared on the masthead as guest editors for LOVE magazine in a strategic bid to prove they have brains as well as beauty. Which brings me to the other big change in the modeling industry. The blurring of lines between models, celebrities, bloggers, vloggers and street style stars has created a new hybrid profession: ‘influencers’. The catchall term for anyone with a stylish point of view who looks good and commands adoring attention from a global online fanbase, influencers are swelling the ranks of model agencies’ special bookings divisions. From global giants Next, IMG and Women, to leading London agencies, these on-request ‘models’ also command fees as DJs, designers, stylists and photographers. “We look at the image and talent and if we feel that they would work well with us at Select,” says Hannah Sneath. “We take all into account when signing an individual. It’s a whole team decision and we discuss global and social factors when deciding.”

Why do they need model agencies to rep them? Because they have the skills and experience to negotiate the best rates in the minefield of multi-media rights. Plus they’re in daily conversation with the megabrands who hold the purse strings. And hey, the aura of ‘model agency’ never hurt anyone, right? Rumi Neely, Nicole Warne, Chiara Ferragni and Olivia Palermo have all been repped by well-known model agencies, keen to boost the diversity of their offer. 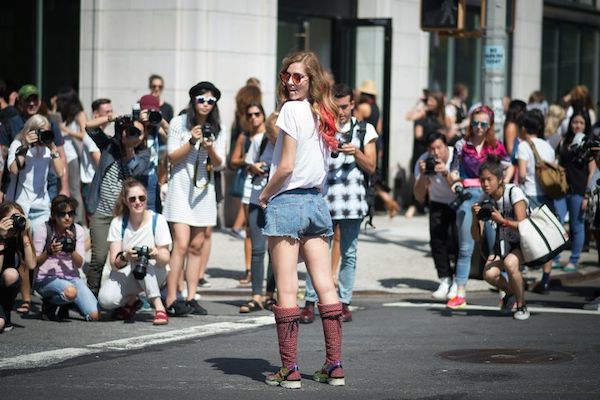 In fact, the influencers could well become the real game changers of the modelling industry. As brands start to build Instagram into their media budgets, that innocent little smartphone square is going to become increasingly important as advertising real estate. Already style bloggers use their Instagram accounts as a shop window, linking the outfits they showcase to LikeToKnowIt, to earn a commission from resulting sales.

At January’s WIRED Retail conference, LikeToKnowIt’s Amber Venz revealed that as well as bloggers, they court editors and models as important influencers to help drive sales. And even if they’re not earning a sales commission, models and bloggers are certainly building brand relationships via the choice of products they let into that sacred social space. Hey, you didn’t think all those models paid for their Burberry blanket shawls did you? 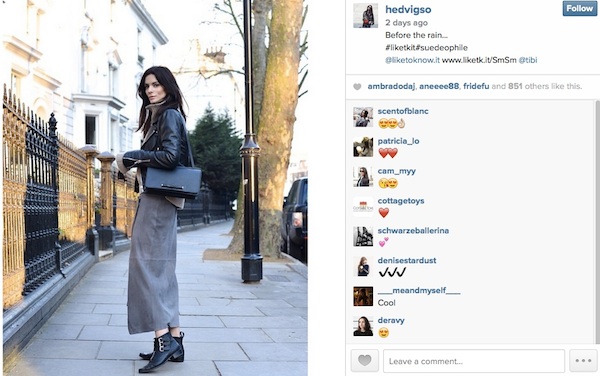 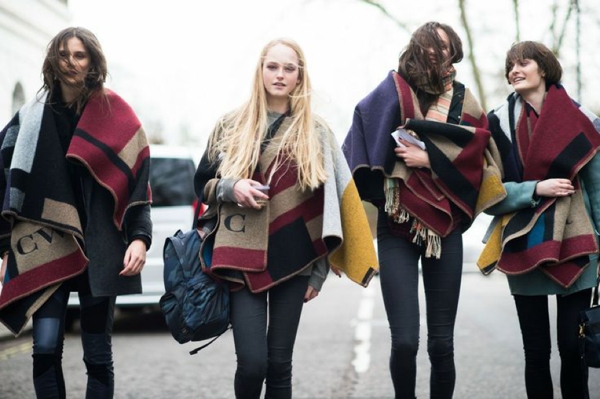 So what, pray, does the next few years of modelling look like? On one hand it looks like a more relatable world in which carefree Insta-models like Cara represent ‘everygirl’ rather than a Gisele-like super-being. Hence the huge success of Kendall Jenner and even Zoella. But beyond that comes the inevitable saturation point. Because once we reach peak reality, might we tire of seeing girls and women who look ‘just like us’? And will we instead find ourselves secretly drawn to the mysterious, the special and under-the-radar?