Looking forward to London Fashion Week? Here’s something I hope will grab you. On Friday 13th September, I’ll be hosting a live make-up lesson on Google Hangout with Max Factor to help launch its Whipped Crème foundation. In the morning I’ll be tweeting up a storm backstage at Felder Felder, then post-show, snatching the make-up from the hands of Max Factor make-up artist Mel Arter and delivering them to Max Factor make-up artist Caroline Barnes at our Google Hangout*. We will be joined by P&G’s Dr Sarah Vickery, Felder Felder’s Isabelle Domier and hopefully…you.

To watch the live make-up lesson, just join the Max Factor hangout event on my Disneyrollergirl Google+ page and you can see Caroline Barnes recreate the Felder Felder look while we discuss make-up, beauty trends and fashion week live on air. Let me say that again: we’ll be demonstrating how to recreate the Felder Felder SS14 catwalk look mere minutes after the show. Now that’s gotta be a LFW first!

If you’re not on Google+, now’s a good time to join and it’s pretty easy (listen, if I can do it…). Here’s a how-to to get you started. But you don’t have to be on Google+ to watch the hangout. Just follow me on Twitter (@Disneyrollrgirl) and I’ll be tweeting the link to the hangout on the day. (And if you miss that, it will also be posted on Youtube*, this blog and Boots.com afterwards. Basically, you won’t be able to avoid it.) 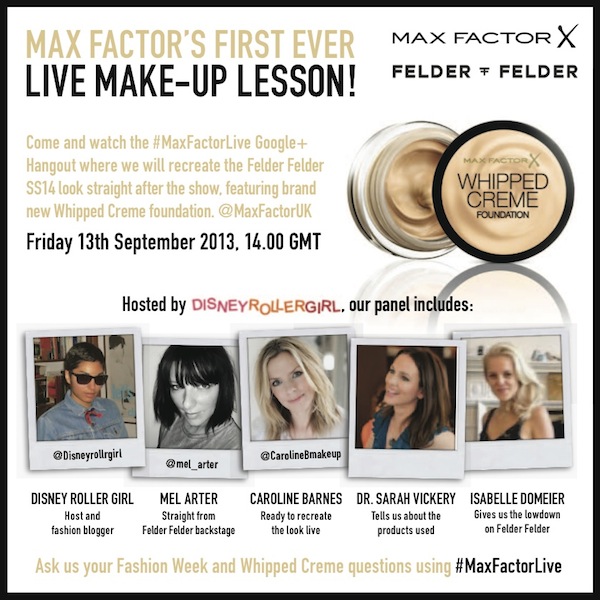 *Don’t know what a Google Hangout is? Here’s a post I wrote earlier