Dior’s new age embraces past, present and future for ss15 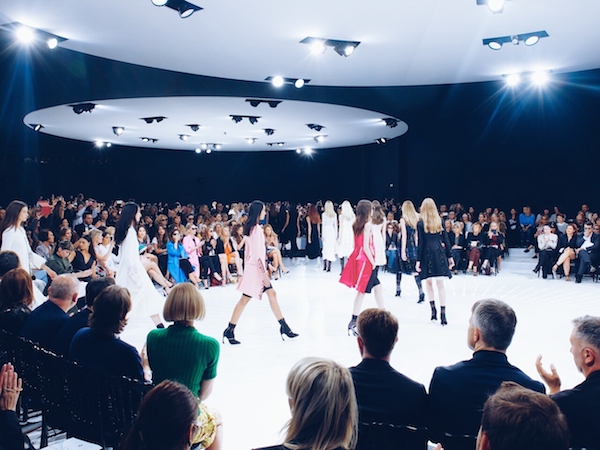 Picture the scene: on arrival at the pap-packed arch of the Musee du Louvre courtyard, you’re greeted by the Dior show venue – a giant mirrored cube. Could this be construed as the ultimate symbol of our modern, narcissistic times? A reflection of us in all our peacock-y finery? This I wondered as I joined pretty much every other show-goer in taking an obligatory selfie to share immediately (cos if you didn’t record it and instantly share it, then you clearly weren’t really there). As I entered the spring summer 2015 show, I expected some more extravagant visual theatrics, alas there was no sign of the wall of 150,000 orchids seen at Dior’s AW14 couture show. In fact, the set was fairly calm; monochromatic, slightly space age-y and a similar layout to said couture show. Black glossy chairs were grouped in four circular ‘salon’ arrangements to give the proceedings an intimate aura.

Reading the show notes which described ‘looking forwards and backwards to prepare for the future through a dynamic sampling and remixing of history’, I thought, wait, this sounds like the couture show too! And when the first of fifty exits emerged on similarly fresh-faced, flowy-haired models as Dior’s July offering, I did feel a sense of deja-vu. Astronauts’ boilersuits juxtaposed with 18th century court dress – hadn’t we been here before? But this is the clever thing; it’s Raf Simons refining an idea, developing his original hyper-luxe output into something lighter, relaxed and widely appealing for the ready-to-wear market. 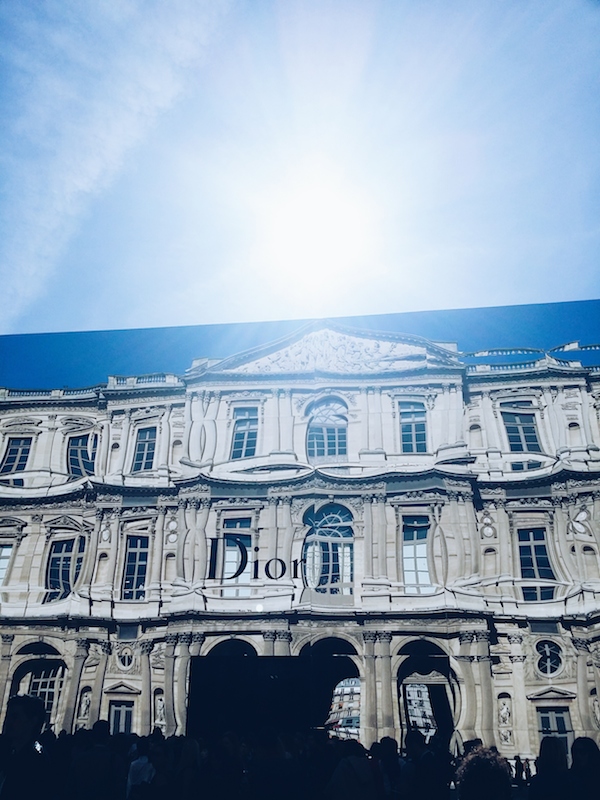 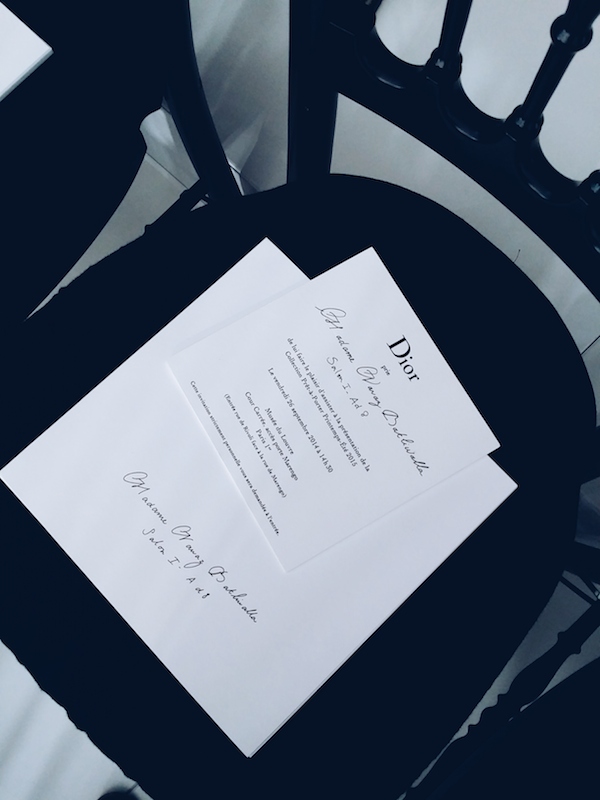 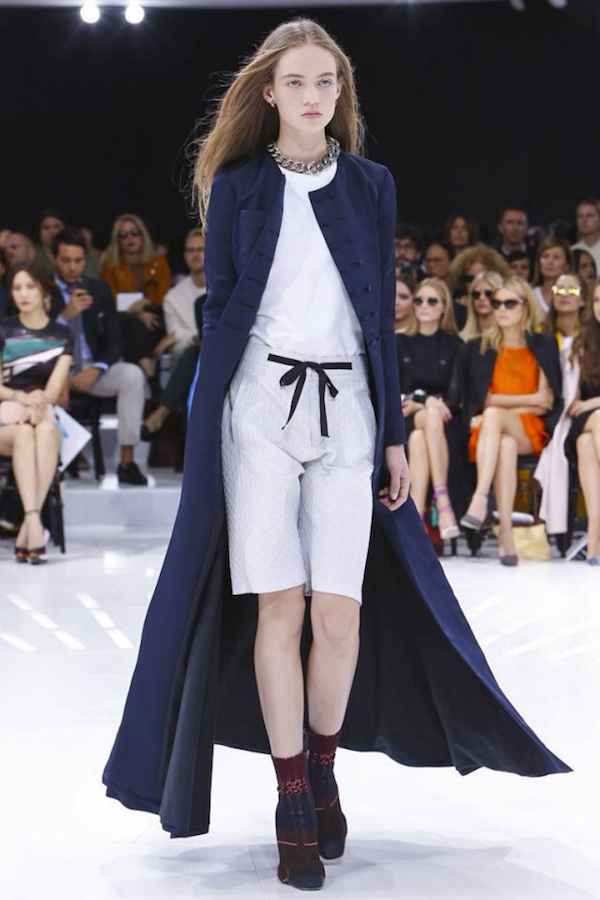 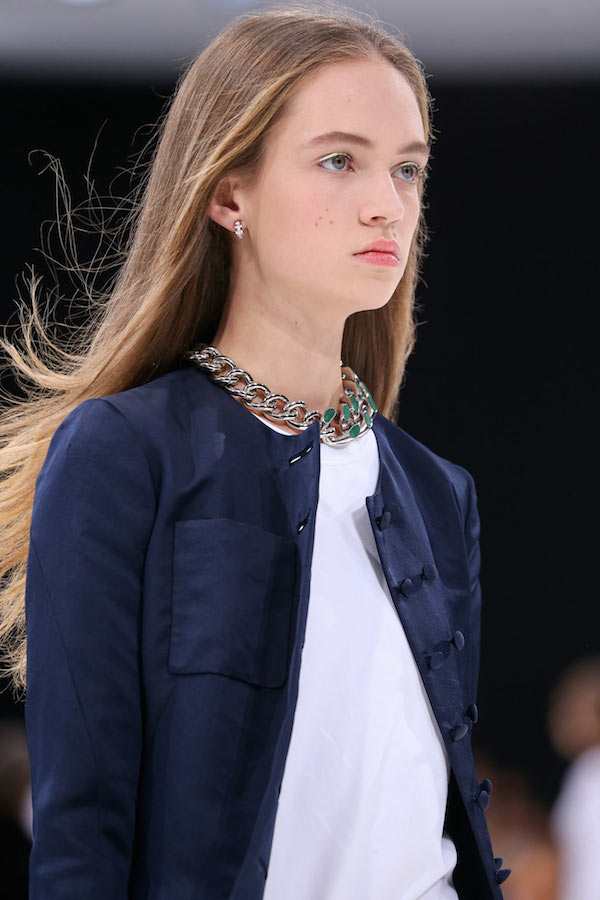 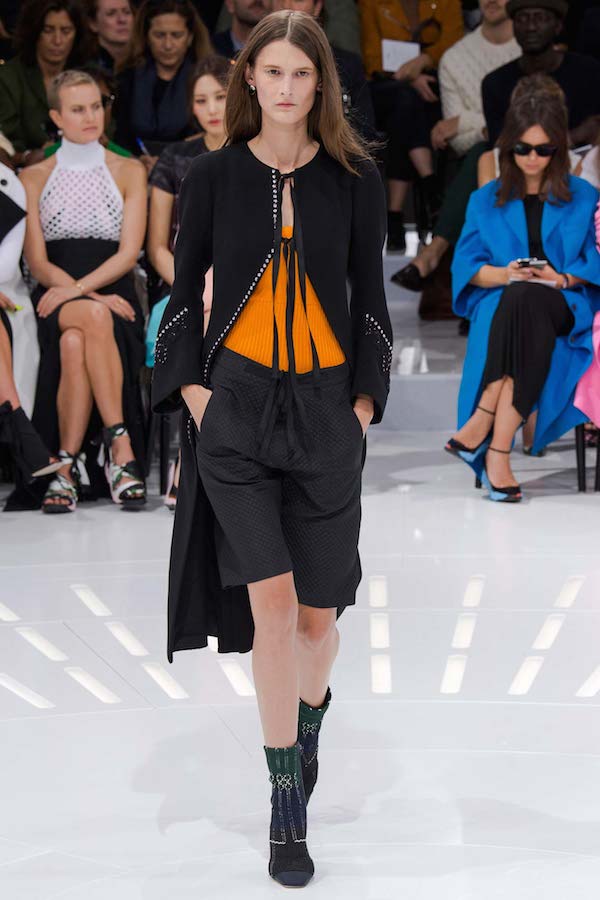 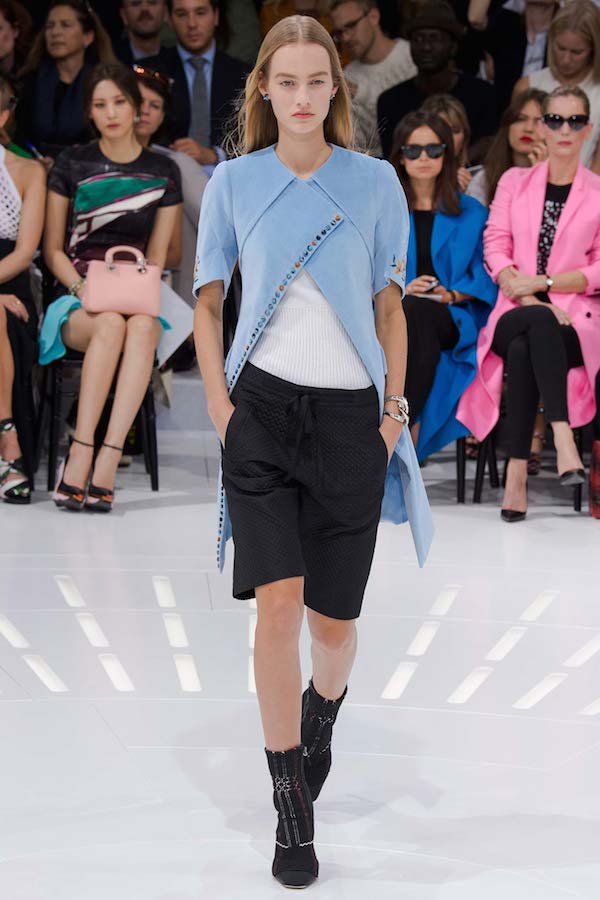 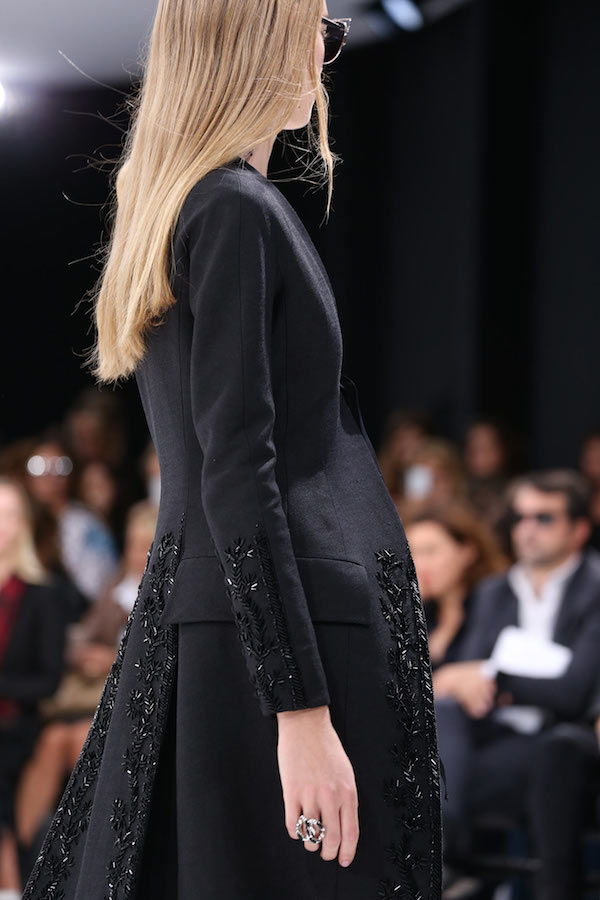 Raf himself has said he wants Dior to appeal to today’s woman. Hence, the shapes, although rooted in cleverly cut, tailored silhouettes had a youthful (not ‘young’, there’s a difference) energy. The highlights were a warp-printed silk taffeta jumpsuit, a floral jaquard bomber jacket and the high-necked, leg-of-mutton-sleeved smock-shirts which were intriguing yet wearable. Meanwhile, the pleated mini skirt-suits were slightly reminiscent of Clueless, especially teamed with hand-knitted sock-booties, a likely hit with the street style contingent. And the glue that bonded it all together was a masterstroke of streetwear-gone-posh – a succession of quilted silk skate shorts. 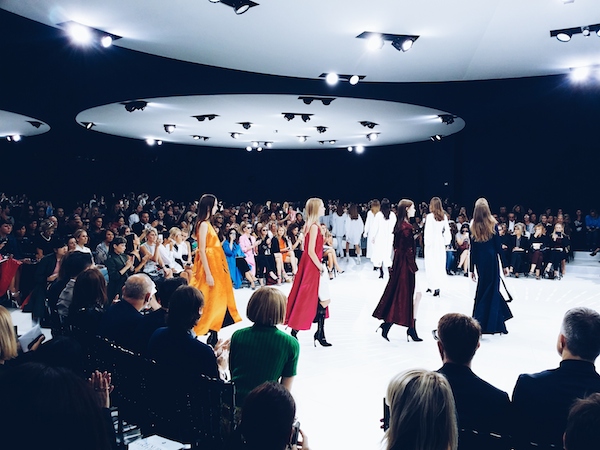 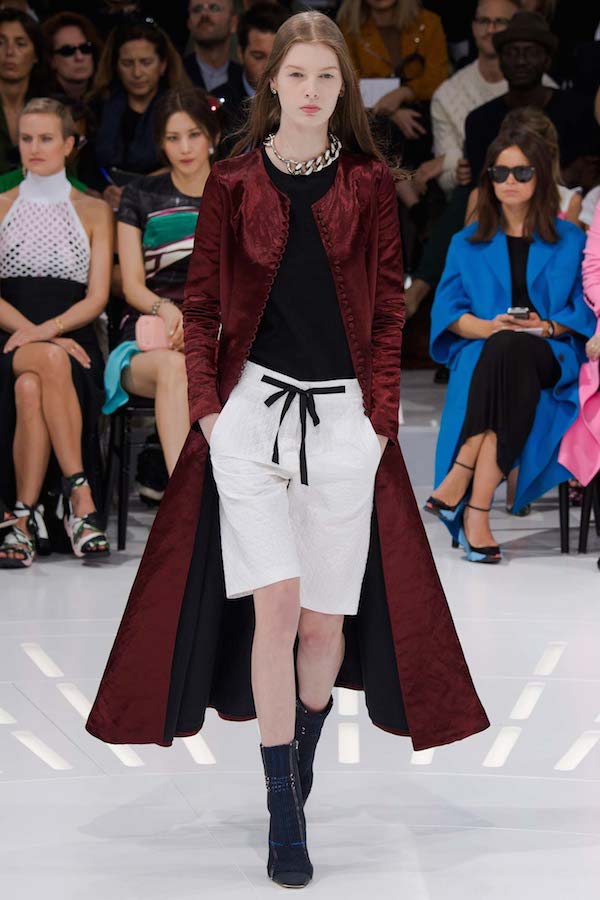 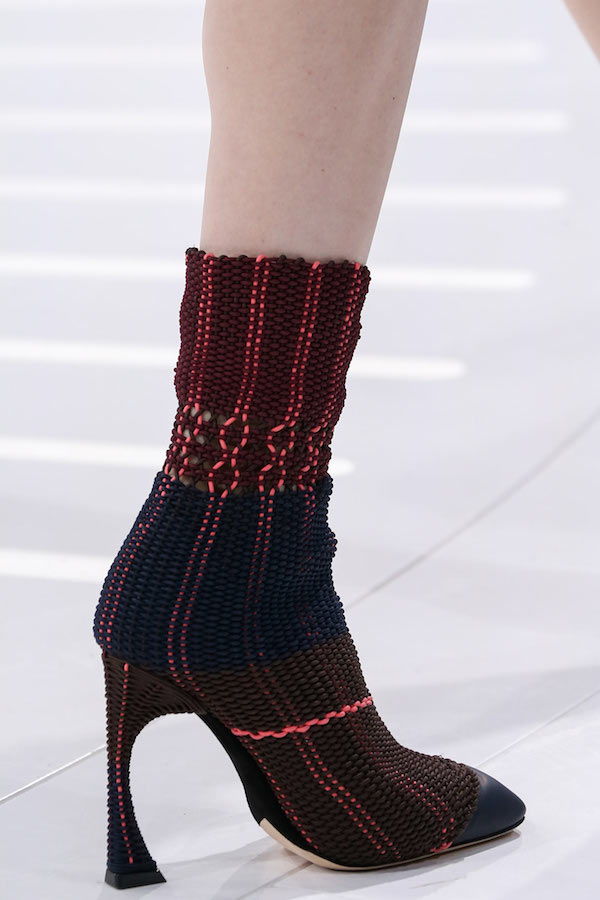 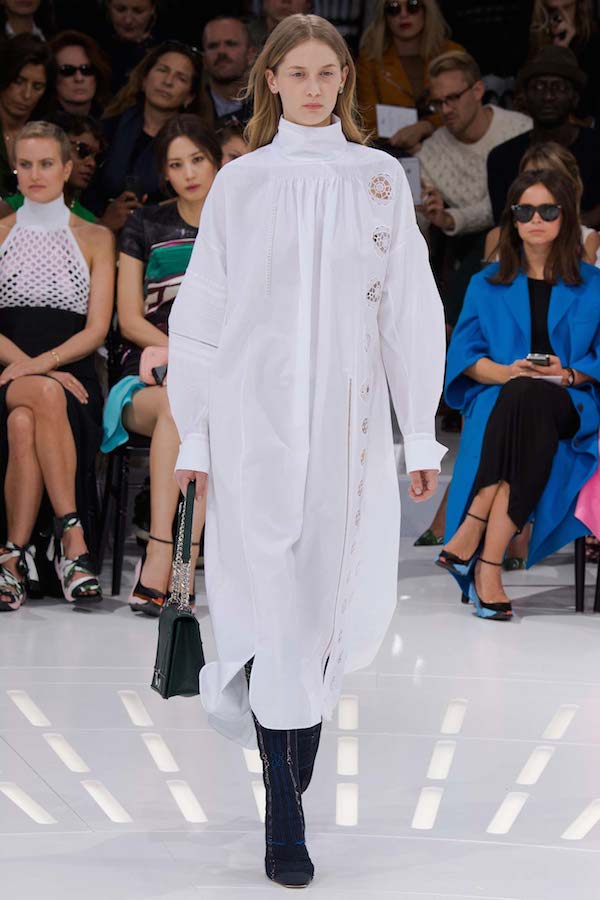 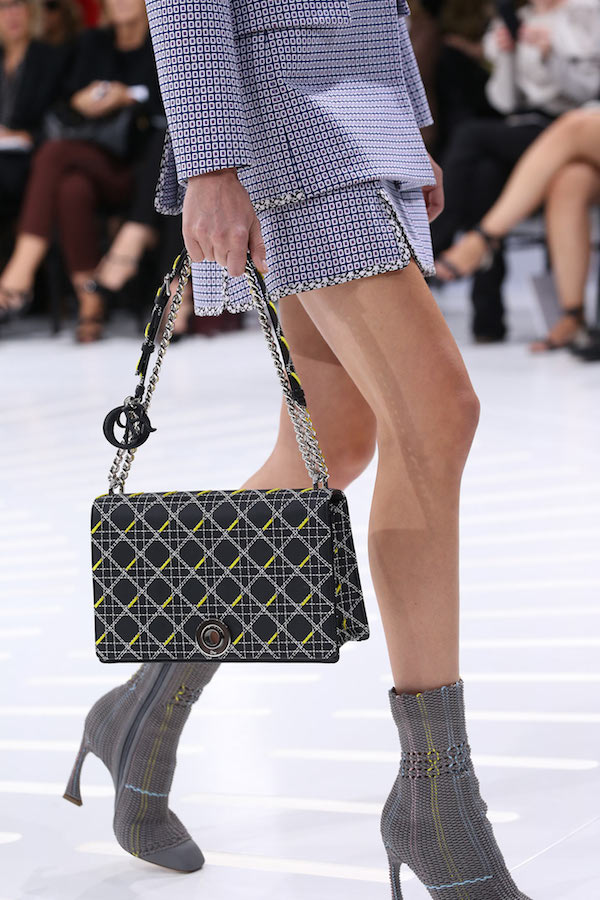 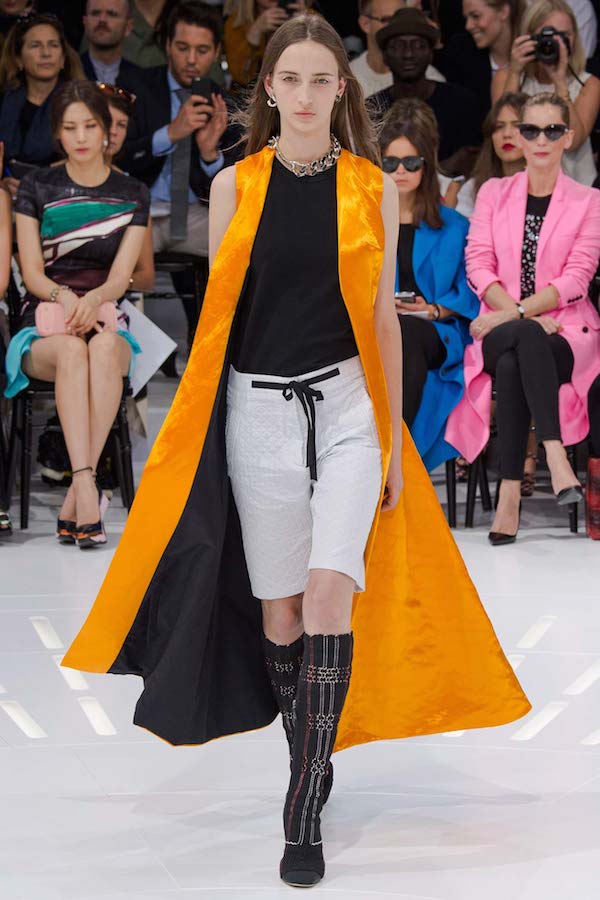 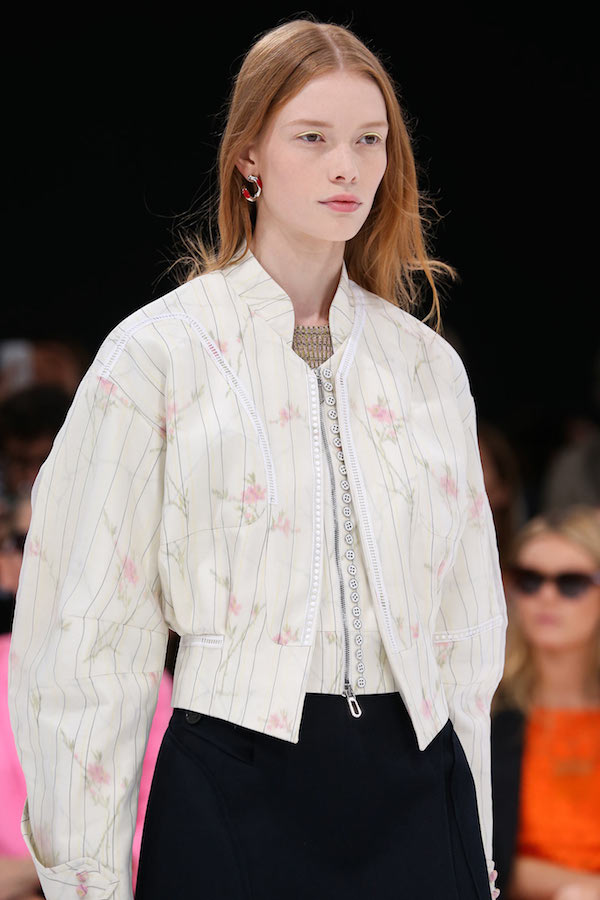 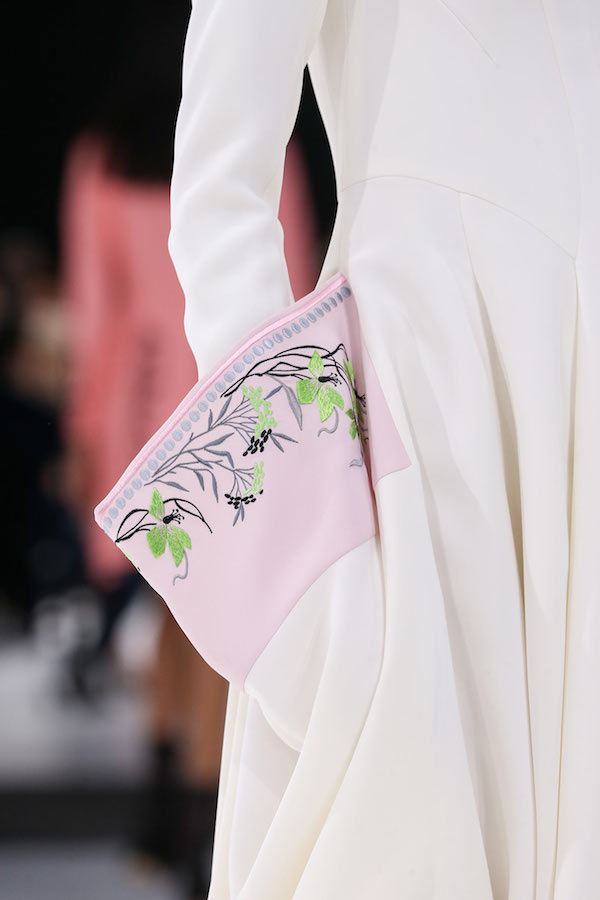 Those luxe skate shorts perhaps summed up Dior’s confident new attitude. Raf’s models, speed-walking in sleeveless redingotes with hands plunged into pockets could just as easily be thirty, forty or fifty-somethings with the same on-the-go spring in their step. The crucial factor is the informal treatment of those period references as reflected in the weightless fabrics, the sporty demeanours and lightly made up faces (not to mention Michel Gaubert’s highly unladylike soundtrack featuring Koudlam and Cowboy Rhythmbox). It’s far from the costume-y effect you might get in the hands of a McQueen or a Westwood – or Galliano-era Dior for that matter.

On the front row sat the usual celebrity bold-faces. Hollywood royalty of course – Dakota Fanning, Marion Cottlard, Natalie Dormer from Game of Thrones – but perhaps the biggest pap magnet was Olivia Palermo who straddles the blogger-celeb line perfectly. A photo of her has twice as much currency, sitting just as happily on the fashion pages as the celeb pages (or ideally both). As a gateway to the blogger generation, but with the poise and femininity of the classic Dior customer, she’s the embodiment of today’s ideal clotheshorse. Post-show, she patiently posed against the mirrored box in its historic, cobbled courtyard, the very picture of past, present and future. 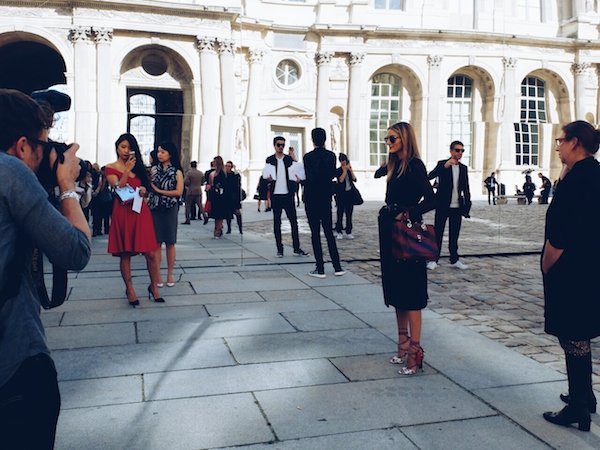 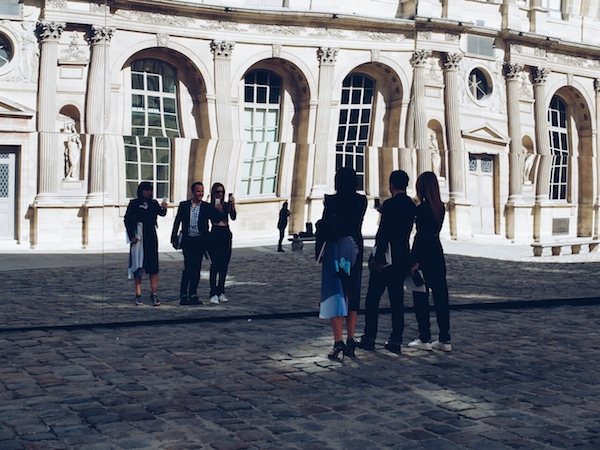 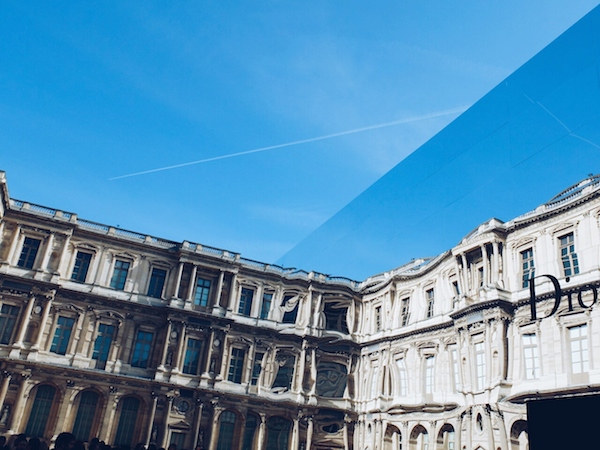 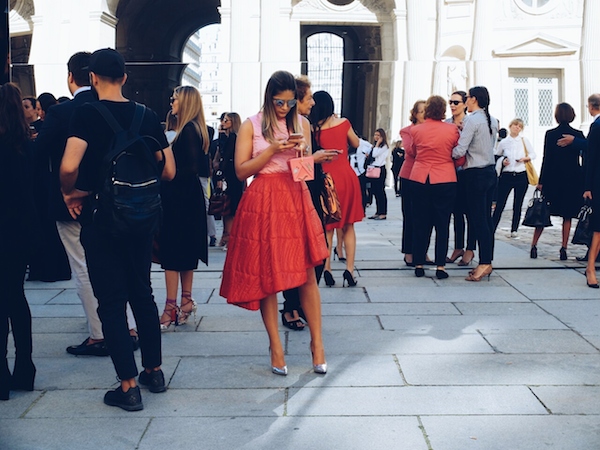 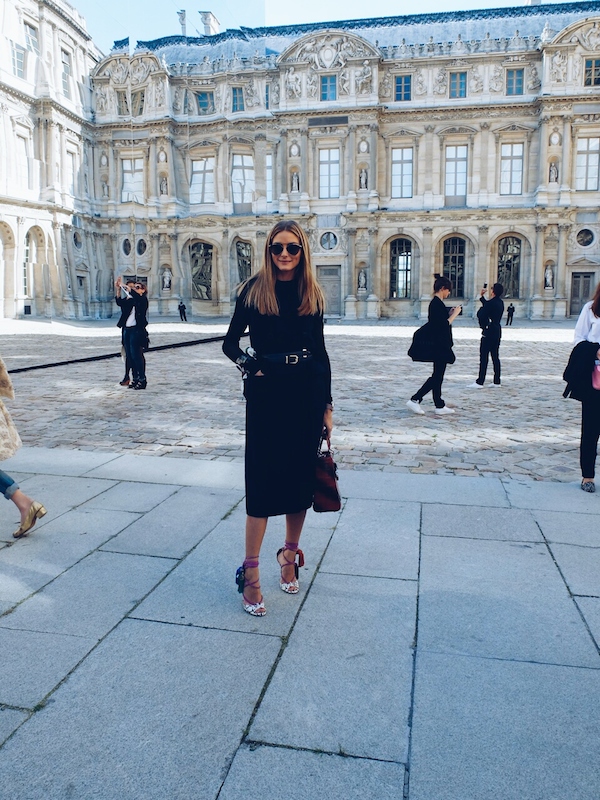 DISNEYROLLERGIRL ATTENDED THE DIOR SS15 SHOW AS A GUEST OF DIOR