I’ve noticed a bit of a pattern. All the womenswear designers I’m most excited about at London Fashion Week started out in menswear. Margaret Howell began with a handful of shirts, J W Anderson with his neurotic boy outsider references and Sibling with their subversive man-sized cashmeres. Margaret Howell is now one of our most successful exports, while J W Anderson and Sibling are both hotly anticipated womenswear collections at London Fashion Week. Maybe it’s a deliberate strategy. Start out in the small, friendly world of menswear, get a buzz going and then make the move into womenswear. Kind of smart, no?

With this in mind, I’m keeping a close eye on Shaun Samson who hasn’t expressed an interest in womenswear (yet) but is certainly causing a low rumble in menswear. His graduate Central St Martins MA collection in February elicited much breathless enthusiasm from the press, an order from Japanese store Cement and representation from press agency Totem. Oh yeah, and the attentions of one Lulu Kennedy. Fast forward a few months and Shaun is on the schedule with Matthew Miller and Martine Rose as part of the MAN show at London Fashion Week.

How did he get here? Shaun’s story began in San Diego where he grew up amongst surfers, skaters and hip hop kids. A fashion-obsessed child, he learnt to sew purely to fill a gap in his classes, then found himself on a manufacturing and product development scholarship, followed by Foundation, BA and MA courses at Central St Martins in London. His collections are rooted in what he knows and what surrounds him but it’s what he brings in terms of textile technique and experimentation where things get interesting.

His graduate collection, a beautiful collage of Woolrich plaids, chunky Aran knits and tailored denim is an intriguing lesson in the technique of needle punch felting. Essentially, by pricking multiple holes in the contrasting fabrics, it enables them to become enmeshed in each other thus producing the ‘bleeding’ effect of the final pieces (you can read more on Style Salvage). All the tricksy stuff goes into the fabric treatment so the shapes remain simple, masculine and utilitarian. 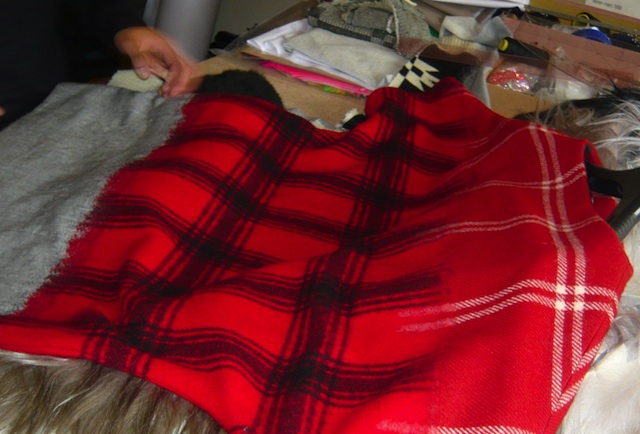 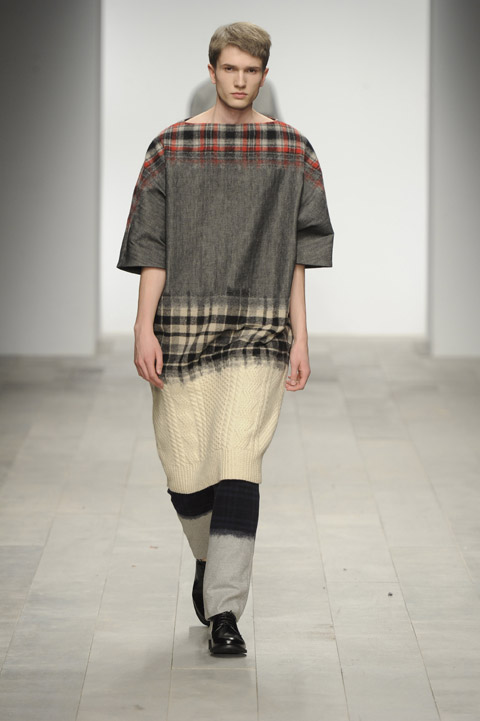 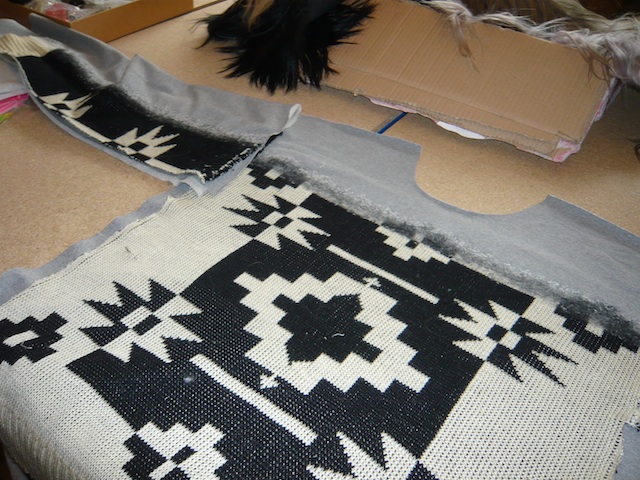 For his SS12 collection show on Wednesday, Shaun has developed his needle punch technique with more references to his heritage. How does he get inspired? “I start with emotion. I was feeling nostalgic which brought up memories of my childhood so I thought of Mexico and I wanted to celebrate my youth in this collection,” he told me when I visited his studio. “I’m not one to do a theme, I’m not going to do an ‘eskimo collection’. This is what I know, all my reference points are real.” Looking around his studio space, I zoomed in on mood boards of surfer dudes and a framed Bruce Weber poster. I’m always interested in inspiration and processes, I guess I’m looking for signs of the ‘magic’ in action. Cathy Horyn also touched on this hidden element where as much as we get to see the backstage pictures and behind-the-scenes video of the show, we rarely get to see the close-up skill and crafting of the clothes. 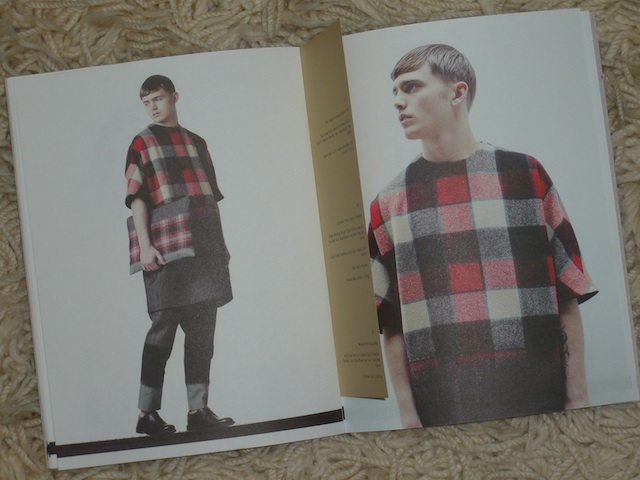 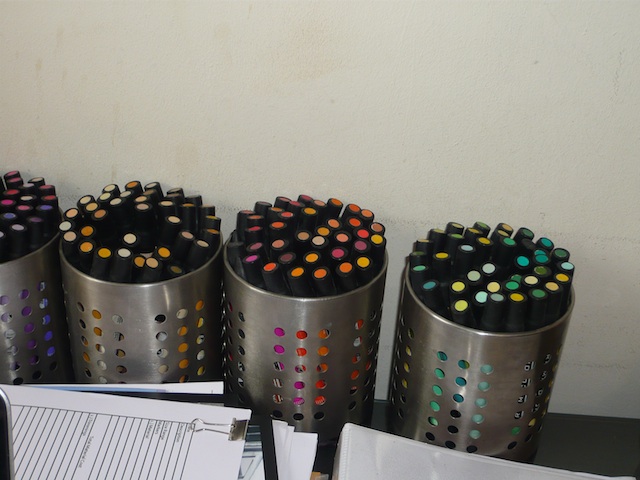 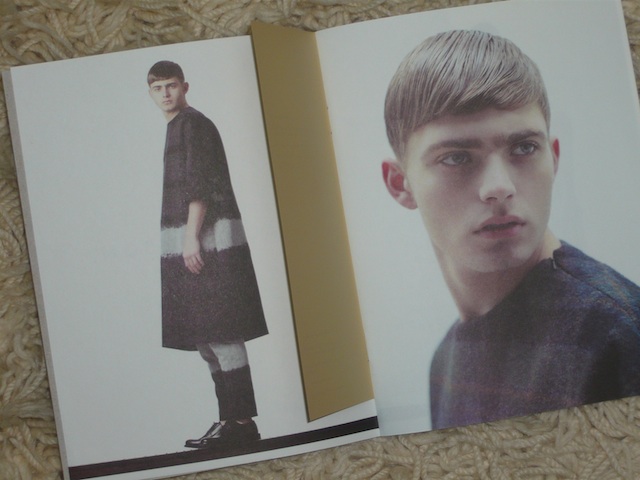 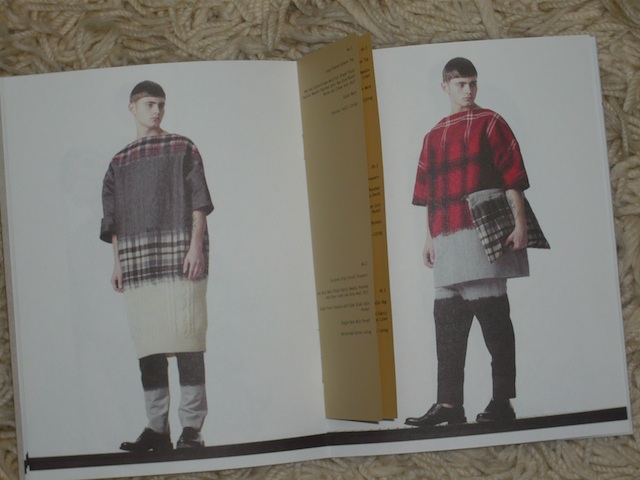 My reason for this studio visit was part of a new project –  Peroni Collaborazioni – a collaboration in which three blogger-designer teams each create a one-off fashion piece that sums up modern Italian style while documenting the process in words and pictures (Style Bubble and Fashion Foie Gras are also taking part). We’re at the beginning stages, still figuring out what Italian style means to us and what exactly we’re going to make but actually, that’s the exciting part right there. As Shaun puts it, “I never really know what I’m going to end up with. By the time I’ve finished, it’s usually a surprise even to me!”