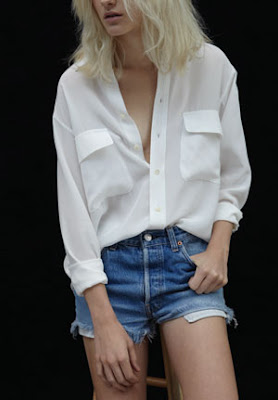 Back in November, following a month of press days, I posted this story on Equipment, the classic shirt line originated by Christian ‘partner of Carine’ Roitfeld. I had spotted the relaunched line during my rounds and thought nothing of sharing the few pictures I had taken. Unbeknown to me, my story was linked via a few different blogs including Fashionologie.

A couple of weeks later, the PR emailed me to say that my post had caused her problems as the Equipment relaunch story had been promised as an exclusive to a major international publication in March. I could have been uncooperative but the PR was so nice and apologetic that I was happy to comply and took the post down. Yesterday, I bought March US Vogue and there was the story. Whoops, sorry Anna!

Now the story is ‘out there’ I have been given the green light to put the post back up. The update is that when Carine Roitfeld took the Paris Vogue job, Christian Roitfeld decided to step down from Equipment. But fast forward a few years and his good friend Serge Azria has decided to relaunch it. Serge (brother of Max) also owns Current/Elliot and JOIE so has excellent credentials. Restoin remains connected to the brand which is jolly handy considering he still has all 3,500 original Equipment designs in his archive. According to Vogue, the ‘just shirts’ essence of the brand will stay the same but there are plans for more directional things too.