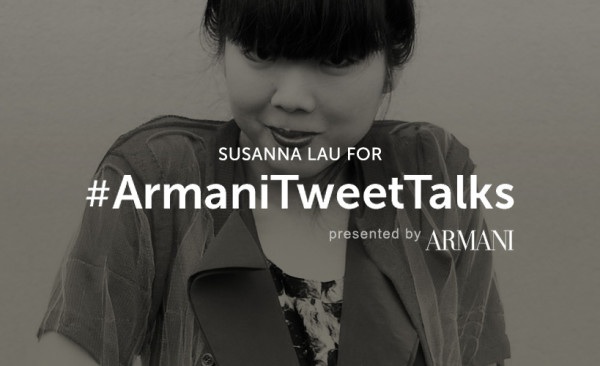 Latest on the ‘brands as content creators’ tip: Armani is launching a series of discussions around the fashion industry, all to take place on Twitter. Starting on June 1st as part of Armani’s One Night Only in Beijing event, the #ArmaniTweetTalks Q&A discussion will be moderated by Peter Howarth with a panel composed of Vogue China’s Angelica Cheung, ‘publisher and tastemaker’ Hung Huang, fashion critic Godfrey Deeny, Yoox’s Federico Marchetti plus Susie Lau and Tommy Ton (you know who they are, right?). The topic of the first Tweet Talk will focus on China’s growing influence on 21st century fashion.

I can’t quite visualise what this will look like on Twitter – in my experience these sorts of tweet talks tend to clog up Twitter feeds which isn’t great if you’re not into the subject. But from a brand awareness point of view, of course it makes perfect sense.  Armani Tweet Talks will choose its guests based on their expertise as well as their ‘significant number of Twitter followers’ (according to the press release), giving the initiative multiple streams of instant communication. But as an alternative, it can also be viewed on Armani.com/tweettalks where viewers can also read up on the panellists and access summaries of previous discussions. This is the latest in a trend for brands to be seen as pioneers not only in their design output but also in their editorial output and it will certainly be interesting to see how controlled the discussion is, how it plays out and who else follows Armani’s lead… 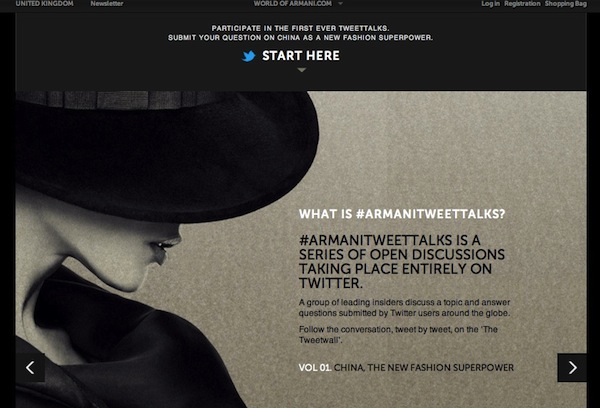