A VIP tour at ASOS HQ 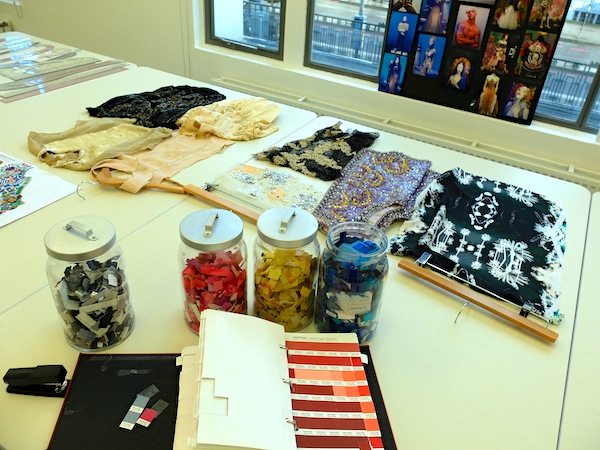 Running a fast fashion empire is a tough old task! Aside from the sheer volume of product to be managed, there’s the competition to worry about, not to mention the cheap labour issues and carbon footprint headaches that entail from manufacturing overseas.

ASOS is one fast fashion company that’s tackling these issues in interesting and highly profitable ways. Last week I spent an insightful afternoon drinking in as much info as I could on a personal tour of its Stitching Academy, its brand new design studios, plus the infamous photo studios at ASOS HQ in Camden… 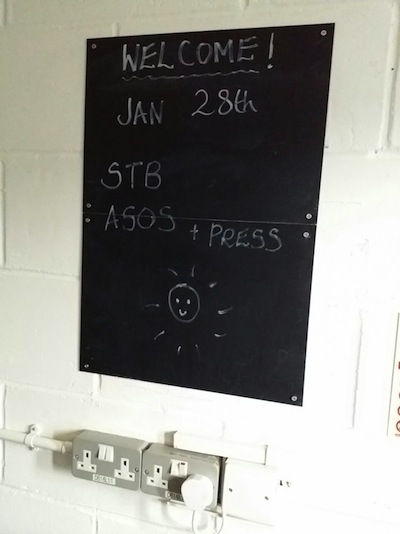 Launched last summer with not-for-profit social enterprise, Fashion Capital, the Stitching Academy is based in Haringey as part of a vast manufacturing facility called The Factory. Located on a mezzanine, which overlooks a buzzing workshop of cutters, machinists and packer-uppers, the Stitching Academy trains 120 Haringey NEETS (not in full-time education, employment or training) in essential fashion and textile skills. These can count towards an apprenticeship and ultimately, a full time job. The ASOS Foundation (a registered charity) supplies the machinery and matches training costs with funds from Haringey council. So popular is the scheme that last week a further £100K cash grant was pledged by social entrepreneurs SBT to help grow the programme.

The Factory itself is interesting because it’s part of the quest to reinvigorate British manufacturing. It supplies fashion to ASOS, John Lewis and Marks & Spencer’s Best Of British line, and as well as providing local employment, it’s a handy place to produce quick samples or trial short runs of fast fashion product. Everyone is up against Zara these days, a brand famous for its uber-slick operation in which it turns around new styles in a couple of weeks from sketch to shop floor. In today’s ‘need-it-now’ culture, ‘soon’ is not soon enough and everyone’s trying to nail the solution of satisfying fickle customers before they get bored and move onto the next new thing. Zara manages its incredible turnaround time by owning its factories in Spain. We’ve all heard the horror stories of poorly run Bangladesh factories so this brings quality control of the factories, as much as the garments, onto home turf. As we become better educated in the sacrifices made for cheap fashion, I don’t think we mind paying a little more for home-manufactured designs. 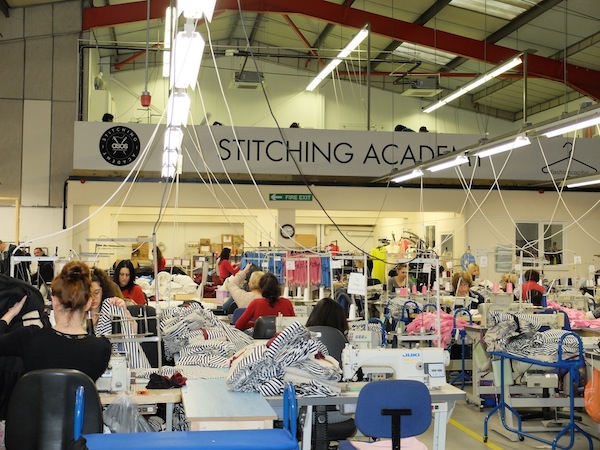 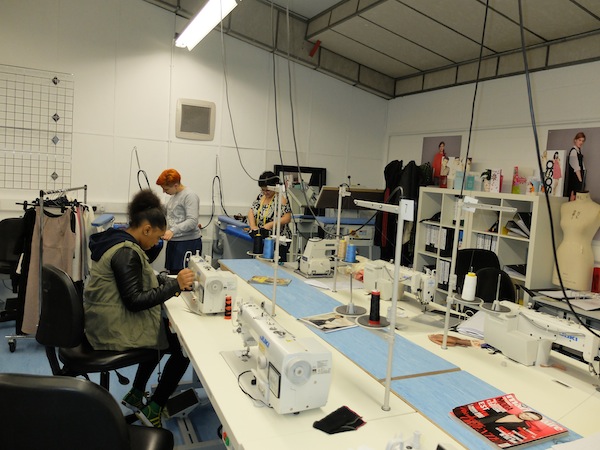 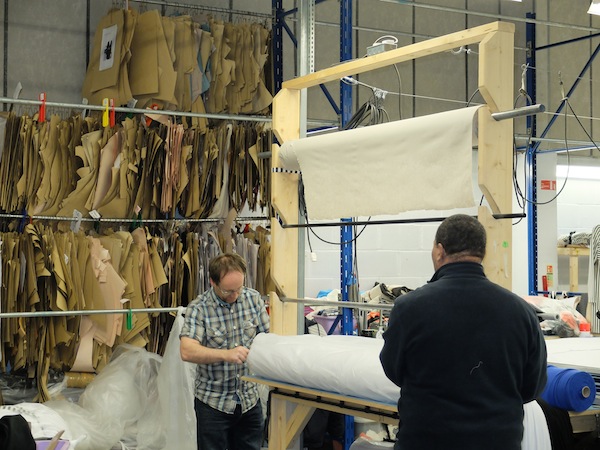 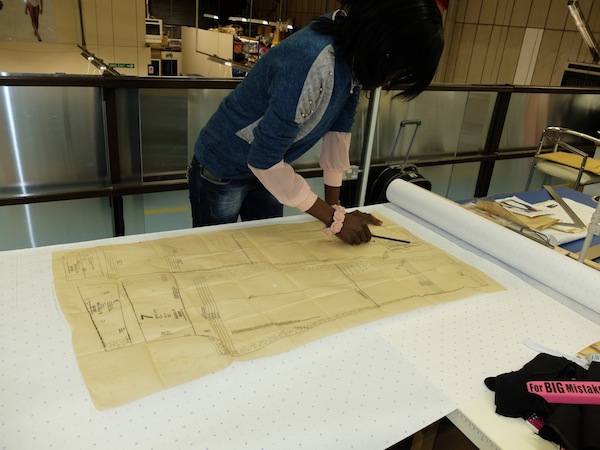 From the industrious hum of the Stitching Academy and The Factory, to the quiet, not-yet-populated design studios at ASOS HQ a few miles away, the difference is stark. But the outcomes are the same. This new space is for designers to create original work on site, shaving off essential hours from the production cycle. They can also experiment with designs to create one-offs for magazine shoots, or perhaps a custom-made piece for a celebrity’s red carpet moment. Areas are taped off for incoming state of the art cutting machines and well-spaced sewing machines await busy hands in this bright workshop, overlooking Mornington Crescent.

On a cutting table I’m greeted by mood boards, textile samples, colour swatches and ancient copies of The Face magazine (rescued from a cupboard that was being emptied out – oh the drama!). There to answer my questions are Clara Varakachanapong, junior designer of evening dresses and her colleague, Louise Thomas, junior designer of tailoring and ASOS Africa. They talk me through their process, from research trips, to mood boards, to print samples to final product.

The process starts 6-8 months in advance with a brainstorm day in which thirty ASOS designers share their inspirations. These can vary from vintage finds sourced in foreign flea markets, to indie movies, to street style at fashion week. The process is pretty democratic and emblematic of The ASOS Way. It’s a young company in more ways than one. Started only 14 years ago by CEO Nick Robertson as ‘As Seen On Screen’ (selling tacky lookalike of Paris Hilton and Kate Moss outfits), it’s now firmly fashion-focused and aimed squarely at insatiable 20-somethings. Everyone’s input is equally valued so these brainstorms are an energising and inspiring process for all involved.

On the subject of the relentless pace, Varakachanapong is non-plussed, “it means we can react fast to emerging trends and adapt an idea into something original for us. We like the challenge, it keeps things interesting.” She points to a mood board created by a colleague whose style is “more conceptual than the rest of ours”. It’s littered with clowns and moody, theatrical imagery, plus the odd nod to McQueen and Isabella Blow. All the references and ideas get boiled down to a manageable number of key themes, which dictate the direction of the season. While lots of references are taken from existing design, there’s an art to updating them with modern silhouettes and details. Colour research is also important and print designers then come on board to add their own magic. While the cycle begins well in advance of the season, there’s scope to be reactive too. Like other high street brands, ASOS keeps an eye on the catwalks, as much to reassure itself that it’s on the right track and hasn’t overlooked an important trend. 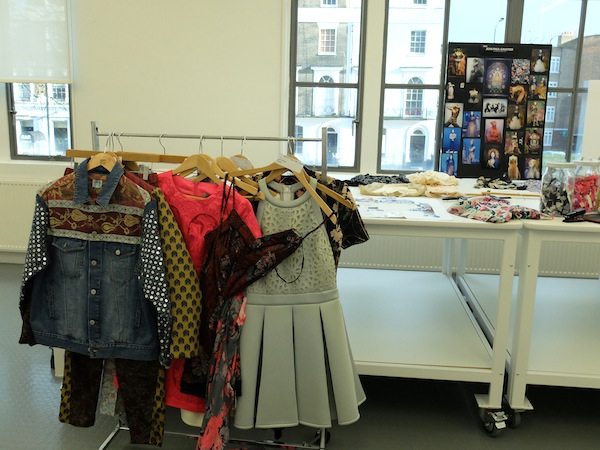 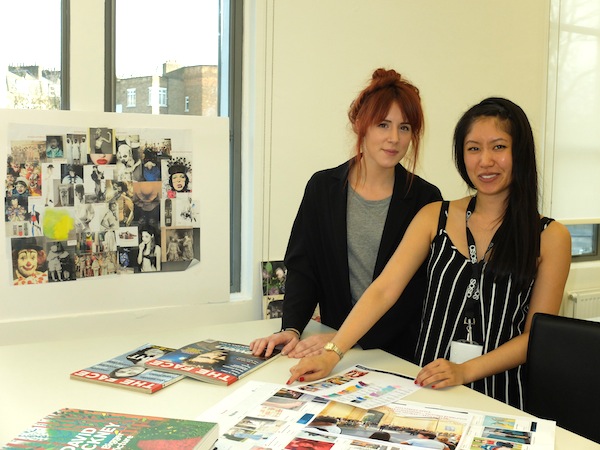 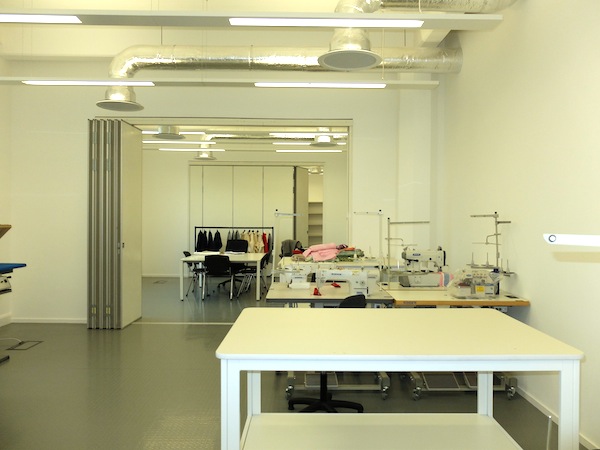 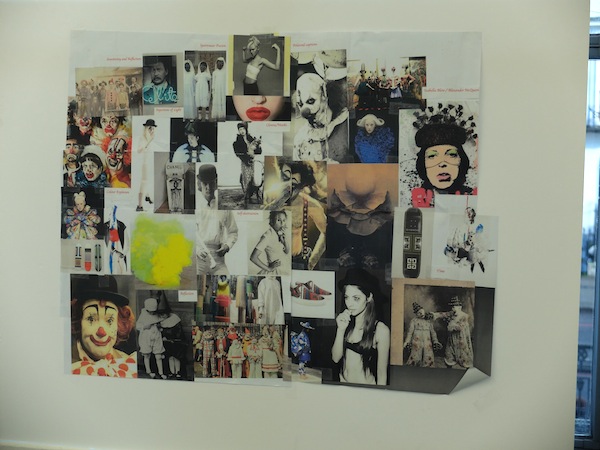 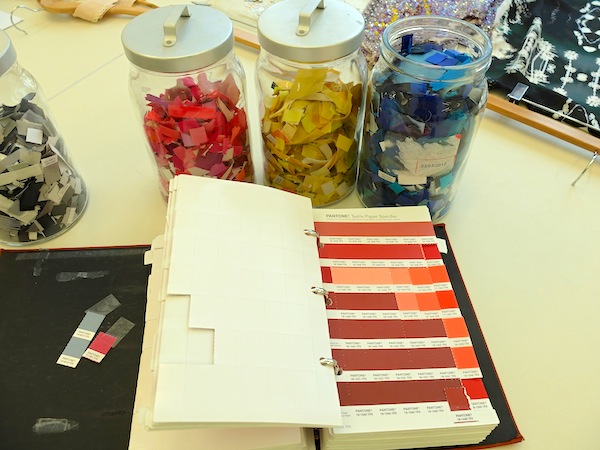 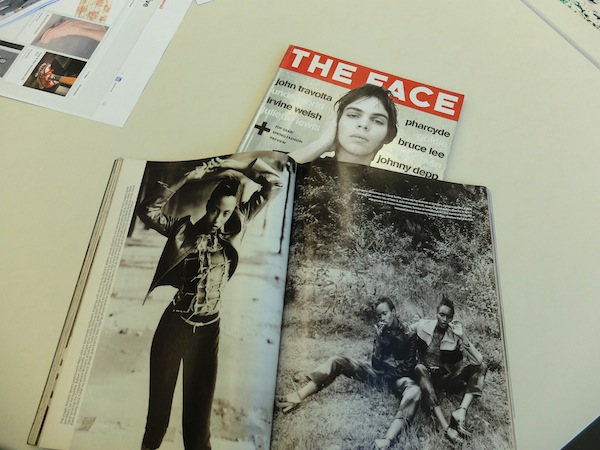 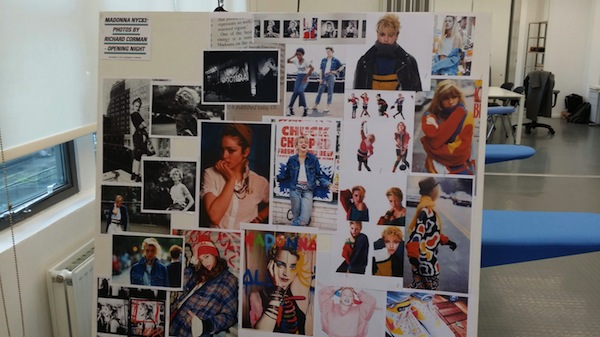 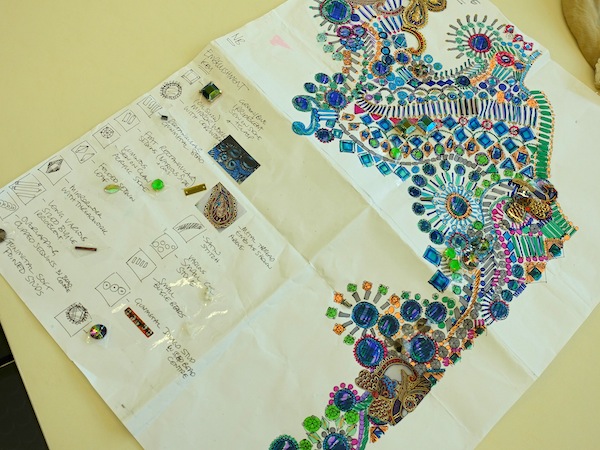 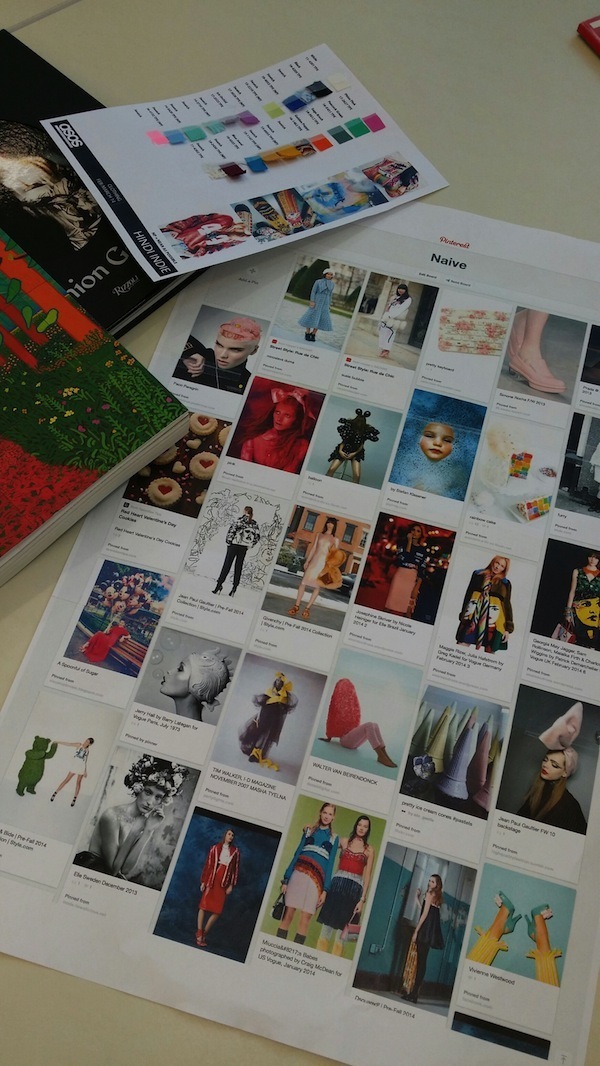 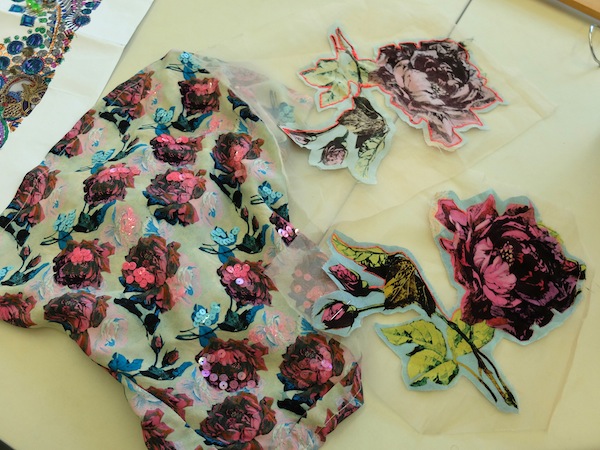 Much of this is standard practice for high street brands. River Island has a similar way of working. Where ASOS differs though, is with its pioneering online practices. It has nine on-site photo studios, an impressive production department, not to mention the two famous catwalk studios. Its regular models have their own fans (for Christmas ASOS put them all on a sell-out calendar) and the ASOS photo studio has 72,000 Instagram followers.

Casting is a key component and extremely diverse. ASOS is proud of its status as a bit of a launch pad for models – it famously gave Cara Delevingne and Malaika Firth their early jobs before they became campaign girls for Burberry and Prada. And while ASOS works with all the top agencies, it’s finding that street casting has become increasingly important. In fact, I had to check if the tattoo-sleeved bloke striking a pose in front of us was a model or an assistant testing the lighting. (Of course it was the former). Beards are big at ASOS too – literally and figuratively – with Billy Huxley at D1, one of ASOS’s most popular models. Clearly, in the age of street style and democratic fashion, we gravitate towards people who look like someone we might know. There are guidelines for everything, from styling, to makeup. ASOS models have to look contemporary but would never wear a full catwalk make-up look. It has to look relatable.

A WALL OF GUIDELINES ALONGSIDE THE ASOS PHOTO STUDIOS 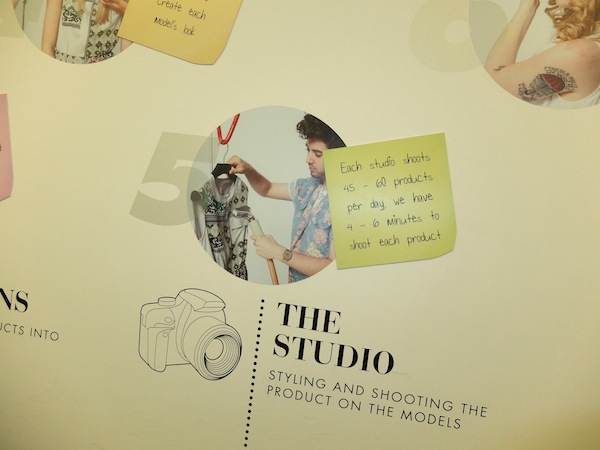 MAKE-UP TRENDS TO TAP INTO 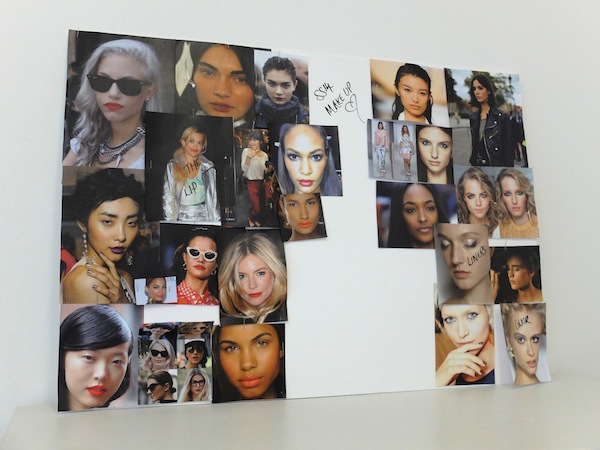 DID I MENTION THE DIVERSE CASTING? 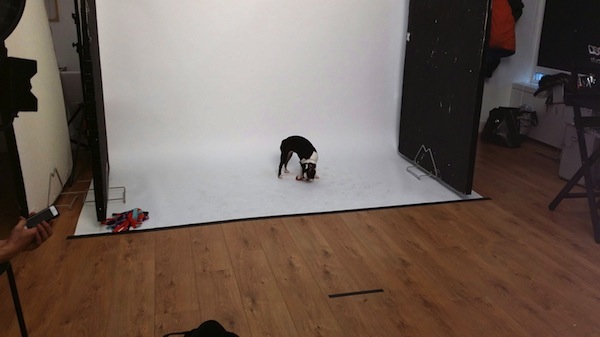 WAITING FOR THEIR CLOSE-UP; THE HOLDING AREA FOR PRE-SHOOT SAMPLES 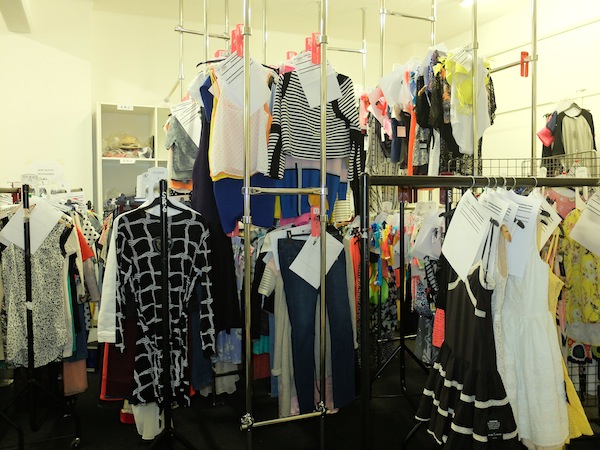 FOUR MINUTES TO SHOOT EACH LOOK 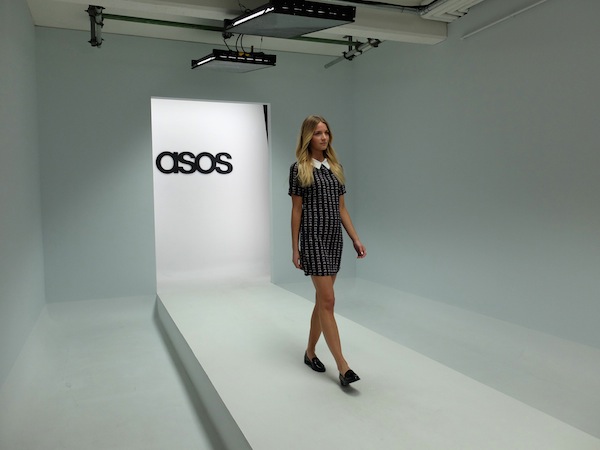 If you want to feel like you’re in a futuristic sci-fi film, go and watch an ASOS shoot in action. With the volume of merchandise that goes on sale on ASOS every week (2500 new products in fact), the product and photography flow has to be managed with robot-like timing. An outfit shot in the morning could easily be live by the same afternoon. God forbid a model should call in sick. Each model shoots 30 outfits per day and shots are timed to the minute. Only four minutes are assigned per shot so while one model is on set, another will be on the catwalk to maximize time and workforce.

Standing outside the catwalk studio chatting to the PR, the precision timing of models coming and going from the studio felt decidedly surreal. But on this scale (ASOS is predicted to hit sales of £1billion by 2015), there’s no doubt that time is money.  And that, I guess, is the key to success – speed and timing are of the essence. Whether it’s creation, production, communication or (free, fast, global) delivery, this clockwork-like efficiency says everything about ASOS’s unrelenting profits.

disneyrollergirl
•
Follow
My new beauty book!! #facevaluesbook is here, having arrived a few days prematurely, according to a few sightings in the wild. Early reactions are very good - phew - and you can read more about it on the blog - disneyrollergirl.net or link in bio I have also had some rather lovely press coverage which I’ll be sharing on Stories and in my Highlights. Please indulge me for a few days 🤗 While the official U.K. publication date is tomorrow, the US date is not until October. It’s slightly delayed until Oct 19th so apologies for that If you’re interested in fabulous people talking about their beauty rituals, skincare journeys and identity stories, then this is the book for you! Do tell your friends too @laurencekingpub #beautyrituals #skincaresecrets #lihabeauty #scentedcandles #mayanjieperfumes #nordiccedar #beautybook #thenewgarconne
View on Instagram |
1/9

disneyrollergirl
•
Follow
Brooke Shields #oldmoneyaesthetic “It’s sort of a hilariously on-the-nose name; “old money” gets right to the point of what all fashion trends ultimately are, which are displays of conspicuous consumption. Yet it seems to be arriving right on time, as a counterweight and companion to the loud, whimsical design associated with Gen Z and the name brand-heavy “California rich” look the Kardashians made inescapable.” @rebexxxxa nails it in @voxdotcom Read all about the #oldmoneyaesthetic TikTok trend on the blog. Disneyrollergirl.net or link in bio 👆🏽
View on Instagram |
4/9

disneyrollergirl
•
Follow
In case you missed it, LVMH just hired a new artistic director for #EmilioPucci. Someone with a great pedigree, an outstanding eye and the best connections in the biz. Check out my blog post to find out why #camillemiceli is the super-influencer you’ve never heard of 👀😎 Disneyrollergirl.net or link in bio
View on Instagram |
5/9

disneyrollergirl
•
Follow
Old Money Aesthetic is trending on TikTok. But what is it? “It’s sort of a hilariously on-the-nose name; “old money” gets right to the point of what all fashion trends ultimately are, which are displays of conspicuous consumption. Yet it seems to be arriving right on time, as a counterweight and companion to the loud, whimsical design associated with Gen Z and the name brand-heavy “California rich” look the Kardashians made inescapable.” Rebecca Jennings nails it in @voxdotcom. Read more about in my latest blog post. Link in bio 👆🏽 #oldmoneyaesthetic #oldmoneystyle #amandaharlech #bruceweber #heritagestyle #oldbottega #loropiana #ralphlauren #vintagehermes #vintagerolex #llbeantote #npeal #stealthwealth #nolabel
View on Instagram |
7/9

disneyrollergirl
•
Follow
Street style before ‘Street Style’ Street style season is almost upon us. Here’s how they did it back in the day. More pics on the blog - disneyrollergirl.net or link in bio 📷 by @stevehiettphotography for Nova Magazine via @magazine_fan #fashionweek #streetstyle #novamagazine #carolinebaker #beatrixmiller #gracecoddington #suzymenkes #stevehiett
View on Instagram |
9/9
Follow on Instagram