EXCLUSIVE: Who is the secret Chanel tweeter @CC_Linlithgow? 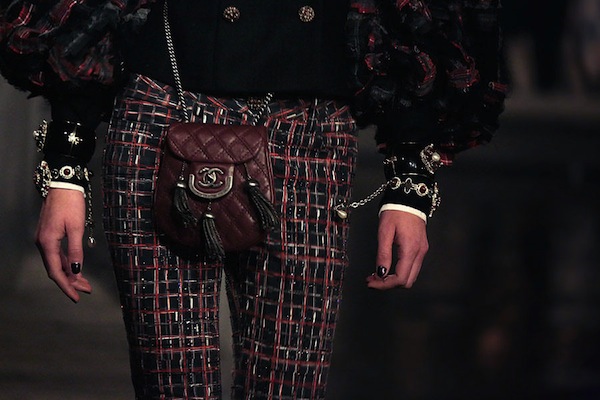 On Tuesday night, coming home from a dinner, I was gripped by the tweets about Chanel’s Metiers d’Art show in Linlithgow, Edinburgh. So many of my Twitter followees were at the show, retweeting tweets from what I assumed was the official Chanel @CC_Linlithgow account. It certainly looked official from what I saw when I logged onto Twitter at home. This ten-day-old Twitter account had aggregated hundreds of Instagrams, Twitpics and nuggets of as-it-happens commentary from the models, press and guests at the show. But as I scrolled through the images, a story unfurled further back to include the entire ten-day build-up to the event, including atmospheric photos of the palace grounds and romantic Linlinthgow scenery.

As I was about to publish my blog post on the Metiers d’Art show, I realised that this was not an official Chanel Twitter account at all, but one set up and maintained by an adoring Chanel fan and Linlithgow resident. But who was this dedicated, renegade tweeter? I had to find out [P.S. read through to the end and you will get a gorgeous surprise]…

DISNEYROLLERGIRL: So, @CC_Linlithgow, who are you really?
@CC_LINLITHGOW: My name is Jenna. My job is completely unrelated to fashion or communications and has no connection to CHANEL. Linlithgow has been my hometown for almost all of my twenty-eight years. 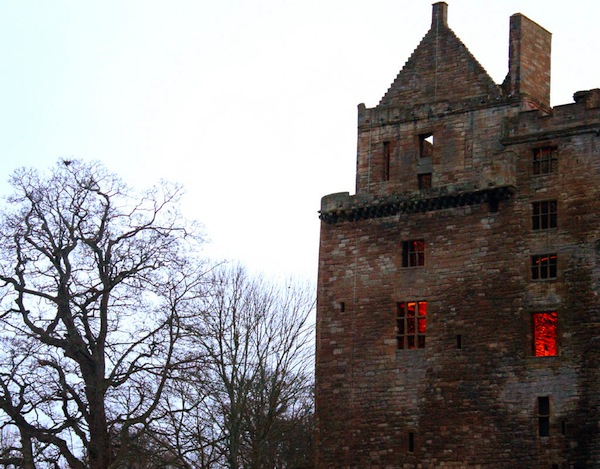 DRG: What do you love about Chanel?
JENNA: Coco Chanel has always been a source of inspiration for me. I hugely admire her steely determination in the face of adversity. I regard the CHANEL Metiers d’Art collection as the pinnacle of the fashion calendar. By saving the heritage and ancestral skill of the ateliers, CHANEL is very cleverly creating a laboratory for the future of haute couture. The craftsmanship behind PARAFFECTION is astounding. Karl Lagerfeld is a genius for creating the enchanting designs upon which the craft can be realised.

DRG: Tell me about Linlithgow?
JENNA: After all of the recent press you may well already know that Linlithgow Palace was the birthplace of Mary Queen of Scots and King James V. Mary Queen of Scots was a bit of a fashion trailblazer herself. Mary chose to wear white at her wedding to the Dauphin François of France. Until then white was traditionally worn by royal ladies when they were in mourning but in this, as in other things, the strong willed Mary may well have been an innovator of her time, keen to not just impress her own taste on her wedding day (after all, she hadn’t been allowed the privilege of choosing her groom) but also show off her famously pale red-headed beauty, which would have been wonderfully accentuated by a pure white dress. Other than being a Royal Burgh, Linlithgow was once renowned for artisan boot making and clothes dyeing. Nowadays however, Linlithgow is a commuter haven with Edinburgh city centre a mere 15 minutes away by train. The loch, palace and canal certainly make Linlithgow an incredibly peaceful and beautiful place to live. 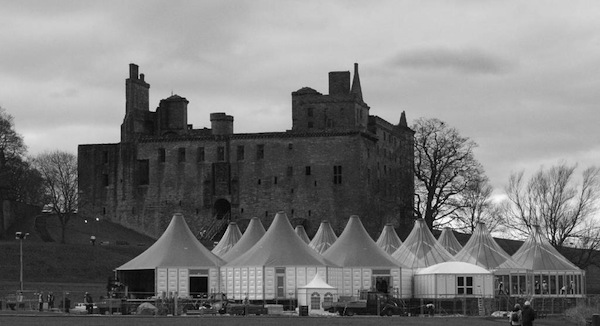 DRG: How did you get the idea to tweet the whole Chanel-Linlithgow experience?
JENNA: When I heard the collection was going to be staged at Linlithgow Palace (probably around three weeks ago) I made it my mission to find a way to be there, even though I knew from the outset that this was pretty much an impossible task. I exhausted my first options (friends, friends-of-friends, parents of friends-of-friends… you get the picture) to no avail. Undeterred I decided to try and obtain the contact details for the PR managing the event from CHANEL, which was surprisingly easy. Inevitably, Sarah from CHANEL very politely declined to extend me an invitation. I am still amazed that she replied considering how many other people (with a legitimate reason to be there) were likely requesting the same.

Setting up the @CC_Linlithgow account seemed like the next best thing to actually being able to experience the show in the flesh. I hoped it would allow me to find out the most up-to-date information about the show and gain a temporary glimpse into the world of CHANEL and of course live vicariously through the fashion elite. It was also very important to me that the legacy of the CHANEL event focused on Linlithgow as well as Edinburgh so I was delighted to see #Linlithgow trending on Tuesday night! 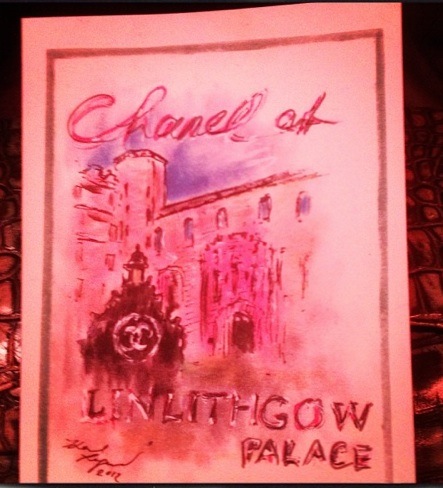 DRG: Did you have any contact with Chanel? Were they aware of what you were doing?
JENNA: Just the email contact with the PR manager, Sarah. I’m not sure if they know about the Twitter handle or not.

DRG: You did a lot of tweeting – especially images – that really gave an incredible insight into the journey, did you sleep?
JENNA: I live a five minute walk away from the palace so I checked in on progress at the weekend and cajoled friends into taking photos for me whenever they were nearby. I did spend an inordinate number of hours on it though, coffee has been my saviour. 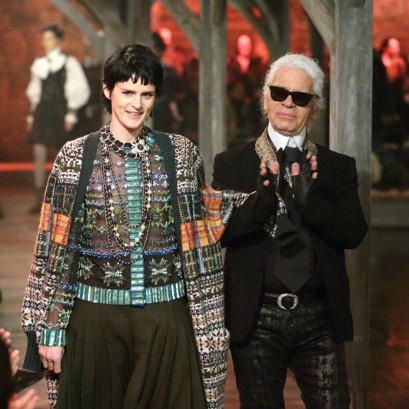 DRG: How close did you get to the event?
JENNA: I was there on the night, in the -3 snowy conditions! Although I didn’t stay for very long I did see the limousine cavalcade arrive. (Rumour has it the drivers were asked the spritz themselves with CHANEL cologne.) I then trooped back home to defrost my fingers after all of the ill-advised outdoor tweeting I’d been doing.

DRG: What were the most exciting moments?
JENNA: The evening before the show my friend, Lisa, and I set up camp in the Balmoral Bollinger bar. Whilst in super-sleuth mode, sipping our vodka martinis, we saw Karl Lagerfeld meet his assistants at the next table. Quote of the night goes to Lisa who quite rightly said “thank god we were drinking something chic!”. It was also undoubtedly cool when Alexandra Shulman mentioned me in one of her tweets a couple of days after I had set up @CC_Linlithgow. Also when some of the people I most admire followed the account, for example Cara Delevigne, Charlotte Sinclair, Katie Grand, and Caroline de Maigret. As well as retweets from the hair supremo Sam McKnight, responsible for creating the dramatic punk-medieval braids for the show. The past two weeks have been terrific, I have enjoyed every minute!

DRG: Any challenging moments?
JENNA: Really just keeping on top of all of the tweets coming through on the night whilst it was going into serious overdrive. TweetDeck helped with that. I did stay up until 2am though, so I was ever so slightly groggy when the alarm went off at 6am. No one (other than Lisa) knows that it’s me behind the account so it was pleasing to see so many people I know follow the account and discuss it. 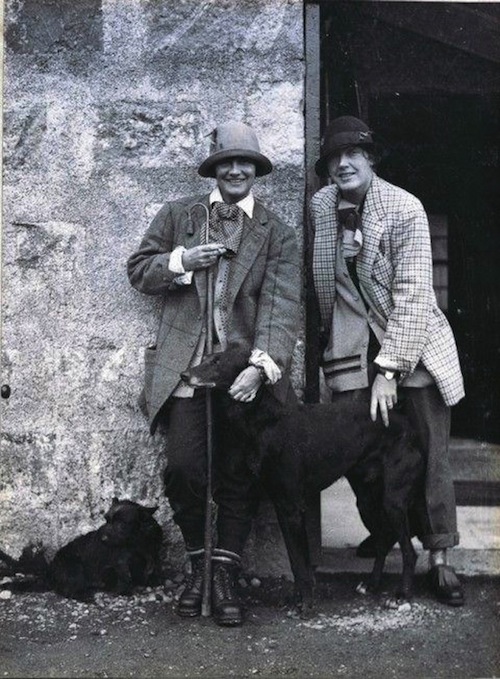 DRG: What was the general reaction to your tweets? (I assumed they were coming from a Chanel rep!)
JENNA: I think the people from Linlithgow following me particularly liked the photography and content relating to the venue, whilst the fashion lovers seemed to enjoy content I added highlighting the atelier’s exquisite craftsmanship as well as the tweets from those in attendance on the night. I was very touched by the people who got in touch afterwards to say they’d set up a Twitter account just to follow @CC_Linlithgow and that they’d really enjoyed following my tweets and the build up to the show. It was also lovely for others to mention that the focus CHANEL had brought to Linlithgow had reaffirmed their pride in living there. It certainly has for me. Since it’s not something I have ever done before I never thought it would be possible for @CC_Linlithgow to gain 2,400 followers (and counting) in ten days so I do feel proud of that.

DRG: Will you do anything like this again?
JENNA: I’d love to! I’m considering what I should do with the account now that the show is over, I have a few ideas but would love some suggestions. I have enjoyed the experience far too much to just close the account or witness a gradual exodus of followers.

SO… that is the mysterious, dedicated person behind the beautifully executed and curated @CC_Linlithgow Twitter phenomenon. And you know what else? This is what she looks like unmasked! Karl, what on earth were you thinking? Lovely Jenna should have been in the show itself, no? 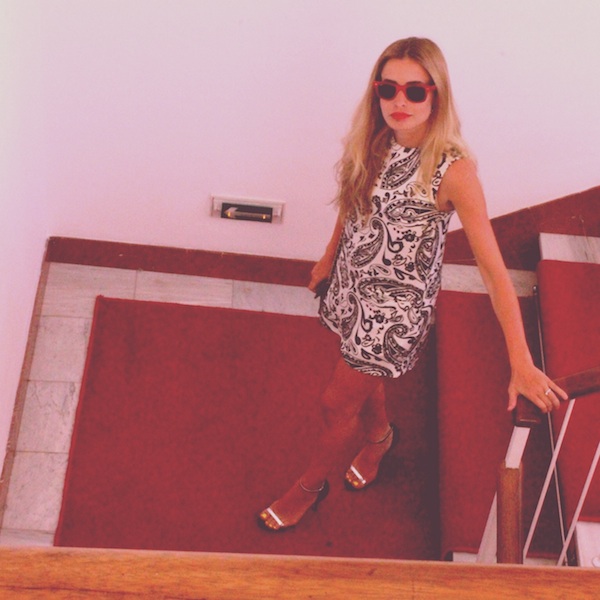