Disney and Louis Vuitton to collaborate? 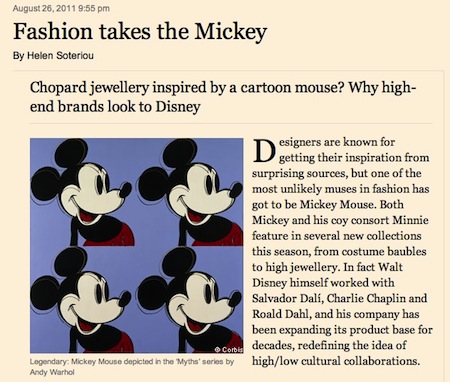 An article in the FT this weekend examined the current flurry of high fashion and Disney collaborations. As well as recent collaborators Jean-Charles de Castelbajac, Mawi and Chopard (who will launch a lavish €30,000 Mickey-themed collection in October), Disney’s vice-president of European consumer products, Marc Low revealed a couple of wish list names that Disney would love to partner with. “We would love to work with Marc Jacobs,” said Low, “he takes so much inspiration from the character world. Louis Vuitton is also a brand we’d love to work with for handbags.”

Disney are super strict about who they partner with as the company’s successes are built on its wholesome, family image and it steers clear of controversy. While I wouldn’t say that Marc was the squeakiest of designers, I think he would do something spectacular and highly collectible with Disney. It would certainly be preferable to SpongeBob SquarePants.

Who would be your dream high fashion Disney hook-up?