I was invited to a preview this morning of the V & A’s New York Fashion Now exhibition which opens tomorrow. It celebrates the new names that have emerged in American fashion in the five-year period from 1999-2004. I have to say it’s not the most dynamic exhibition. It’s in the smaller gallery and all the exhibits are behind glass. Some film footage, designers sketches or even exciting music could have been employed to give it more drama but it’s all very clean, stark and simple.

Alongside the likes of Proenza Schouler, Behnaz Sarafpour and Zac Posen are lesser known labels like Mary Ping (great name!)and Costello Tagliapietra (breathtaking drapy jersey gowns). Some of the terminology confused me though. Designers are grouped in sections called things like Sportswear Chic, Atelier and Avant-garde. OK, ‘avant-garde’ I get but I’m sorry, how can you call Derek Lam and Proenza Schouler ‘sportswear’? I know US sportswear isn’t the same as UK sportswear (to us sportswear is a shell suit, to them it’s smart separates) but this is luxury dressing at its most formal!

It was interesting to see representation by Cloak and Miguel Adrover, two brilliantly original but short-lived labels that didn’t survive the post 9/11 economic downturn. If you’re a fashion student or really into the US fashion scene this is worth a look. If not, get the accompanying book New York Fashion written by the curator Sonnet Stanfill. It goes into more depth than the exhibition and is a great deal more visually satisfying.
New York Fashion Now, 17 April – 2 September 2007, FREE 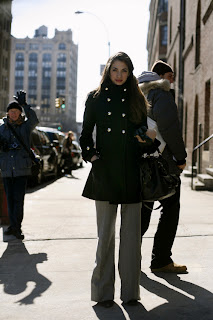 A report from www.WGSN.com says that slacks and flares are a dead cert for aw07. This pic was taken from www.thesartorialist.blogspot.com earlier this year (yay! I’ve finally read his whole archive!). I’m liking this tailored look and can see it being a good (read ‘more wearable’) alternative to the high waisted trouser. Who agrees? 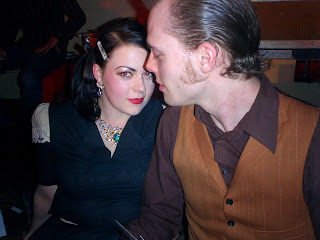 An insightful night last night at the 100 Club in Oxford Street. 6TS is a Northern Soul night that’s been going for 27 years (http://www.6ts.info/). I’ve never been before but it was a brilliant experience. Excellent music, plenty of characters and proper uninhibited dancing. These guys like to use their floorspace! What was lovely was seeing a complete mish-mash of style from rotund rockabilly guys to Kangol-hatted soul boys to little Japanese girls in 40s highwaist pants, tucked-in shirts and ponytails. Sometimes it’s nice to get out of your comfort zone and experience something totally different. 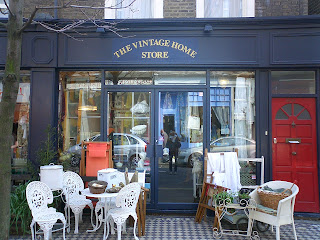 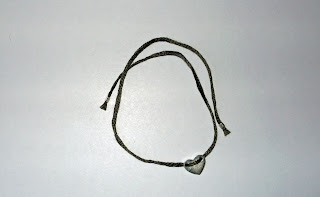 Just back from a west London jaunt. First stop, The Vintage Home Store (105 Churchfield Rd, W3). I love this shop – filled to the rafters with old wooden chairs, rustic quilts and vintage cookery books. And it’s off the beaten track too, so my little secret (until now). Then on to Ledbury Road where I spotted some dainty little charm necklaces in Aime and Paul & Joe. I couldn’t resist this sweet little bracelet in P & J by Lyie Van Rycke (http://www.lyievanrycke.fr). Not sure how it works though. It’s quite fragile so not ideal to get it wet but, once you’ve tied it on how the hell are you supposed to get it off? I hesitated for oh, two minutes before deciding to get it anyway.