Last chance to see Matisse – The Cut-Outs at Tate Modern (at 5am if you so desire!) 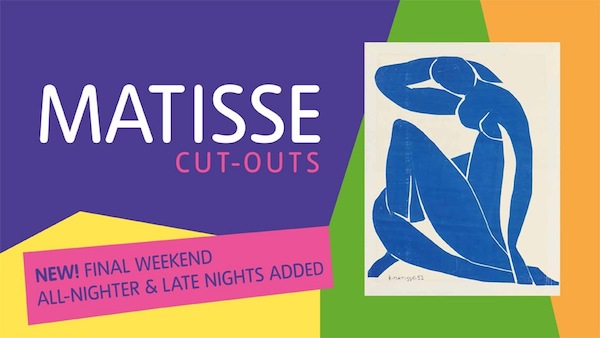 As a rule, I don’t do ‘press release’ blogging (aka cut-n-paste blogging) but there’s simply too much info here to do otherwise! So if you haven’t seen Matisse Cut-Outs at Tate Modern yet, why not do it this weekend in the best possible way? In a customer service coup, Tate Modern is turning the last weekend of the exhibition into an interactive extravaganza. All the info is below…

Tate Modern’s Henri Matisse: The Cut-Outs, will open throughout the night on the final weekend of the exhibition. Timed tickets will be available from 10.00 on Saturday 6 September until 22.00 on Sunday 7 September allowing visitors a last chance to see this once-in-a-lifetime show in London.

All-night free film screenings will be shown of Moumen Smihi’s With Matisse in Tangiers 1993. Matisse visited Tangier in 1912-1913 and Moroccan culture had a life-long impact on his work. This unique documentary explores the encounter from the Moroccan perspective as film director Moumen Smihi retraces Matisse’s time in Tangier. Talks on the exhibition will also be taking place in the gallery at 23.00 and in the very early hours at 1.00.

The Tate Modern restaurant will serve special Matisse-inspired food and drink menus including late night snacks from 23.00 until 5.00 in the morning and a hot breakfast and pastries from 5.00 until 11.00. Visitors will also be able to watch the sun rise over the Thames from the restaurant. In the Turbine Hall, a neon bar will serve beer, coffee and soft drinks and a selection of brightly coloured vinyl off cuts will be available for visitors to make their own cut-outs. The Matisse exhibition shop will also be open throughout the night.

Between the hours of 22.00 and 10.00 the rest of the gallery will be closed and visitors with timed tickets will have special access to the Matisse exhibition. Tate Modern will also be open late until 22.00 every night from Tuesday 2 September.

Tate Modern’s exhibition, Henri Matisse: The Cut-Outs, is the most comprehensive exhibition ever devoted to the artist’s paper cut-outs made between 1937 and 1954. It brings together around 130 works, many seen together for the first time, in a groundbreaking reassessment of Matisse’s colourful and innovative final works. The exhibition will close on 7 September 2014.

Read my review of Henri Matisse: The Cut-Outs here