Guest post: What the menswear buyers bought for AW12

It’s menswear day at London Fashion Week today, a slightly odd bit of scheduling as the men’s buying season is pretty much over by now. No worries though, menswear is getting its very own mini UK fashion week(end) from 15th -17th June, which will mean designers can maximise their chances of making the order books for SS13. Most of the buying for AW12 was done in Milan and Paris in January so what are the brands, trends and standout pieces that excited the buyers from United Arrows, Lane Crawford, Selfridges, Mr Porter and Harrods?  Alison Bishop, retail editor of consumer insight network LS:N Global shares her findings from the menswear shows:

Trendspotting at the menswear shows, I chatted to a few buyers for their thoughts on what works from the runway onto the shop floor. We agreed the layered sportswear/tailoring looks along with multiple knitwear options, from roll-necks to heavy knits, and classic British styling were the trends to watch for autumn/winter menswear. 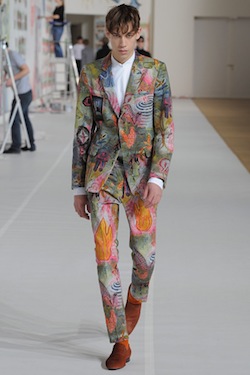 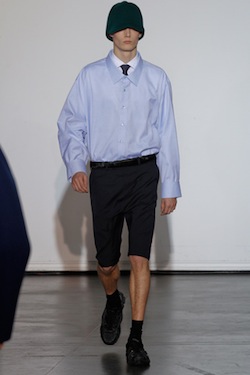 UNITED ARROWS
“It’s been good seeing the bigger fashion houses taking risks this season,” Hirofumi Kurino creative advisor at United Arrows said. “Menswear designers need to take a more challenging approach in an unstable economic market where it’s easy for retailers to complain and just take the easy option when it comes to buying for the season ahead,” he added. “We liked the layered sportswear coats over tailored jackets at Lanvin, the prints direction at Dries van Noten [above left] and the difficult shapes for voluminous shirts at Raf Simons [above right].” 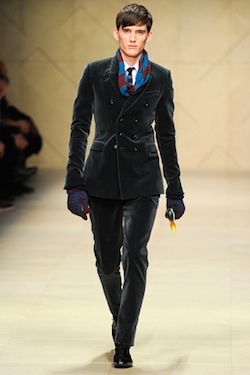 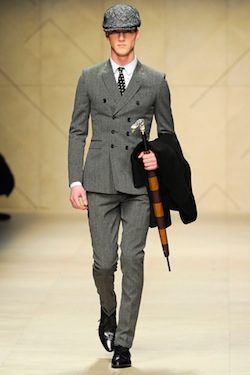 LANE CRAWFORD
Lane Crawford’s David Aquilina, menswear buyer for international designers said: “we have picked up quintessential English tailoring, with a strong focus on tonal greys as the new black with herringbones, houndstooth and the Prince of Wales checks being the main fabrications. Evening wear is also important, with most brands not only offering the classic tuxedo, but also more commercially inspired takes on this menswear staple – in jacquards, satins and velvets.” Aquilina’s favourite collections included Burberry Prorsum, “for the way the collection represented a lot of the fundamental themes at play for the season in fabrication, texture and colour – all with a strong sartorial backbone.” 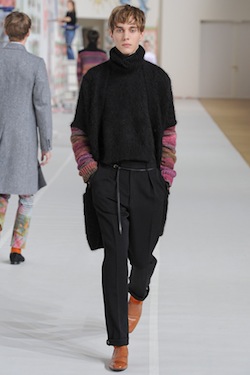 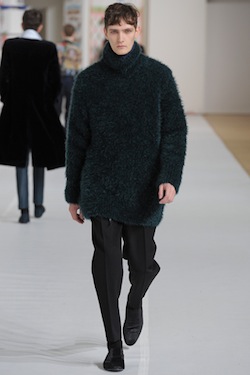 SELFRIDGES
Adam Kelly, Selfridges menswear buying manager said: “there was a real focus on eveningwear at the shows, or rather, a very new kind of eveningwear. The classic silhouette is still apparent, but the new chunky knits and short tuxedo pant, as seen at Dries van Noten, is very fresh,” he said. “We’re buying heavily into chunky knits, in both crew neck and roll neck styles. Hats are also key – we’re expecting both caps and fedoras to do really well with our customers. In formalwear, printed shirts and double-breasted suiting really showcase the British, eccentric feel of the season.”

“We’re excited to be introducing Marni menswear for the first time next season. The collection offers some really interesting outerwear options in the form of collarless coats and jackets.” 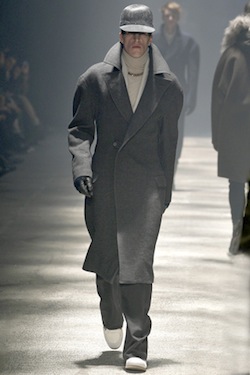 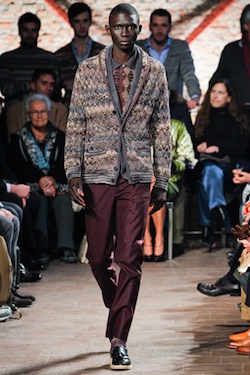 MR PORTER
Toby Bateman, buying director Mr Porter, said: “Despite the warm winter we’ve just have had, outerwear was important. However, it seems to have moved from duffle coats and slim tailored overcoats to full size, full length (often oversized in proportion) and belted at the waist. Designers also played with layers, putting short blouson coats over longer length tailored jackets. Knitwear was everywhere and varied in its execution, from chunky long length cardigans worn as coats over jackets, fluffy mohair blend crew necks in vibrant colours, to fine-gauge roll-necks worn as a layer underneath shirts or simply worn under a suit jacket. Traditional fabrications are still important with tweed and Donegals and flecks of colour adding interest. Velvet seems to be the move on from corduroy – seen in jackets and trousers and in forest greens, gold and peacock blue.”

“Burberry Prorsum was particularly strong in Milan. We liked the country gent theme with the double-breasted suits, the always good overcoats and the way the show was styled – with duck head handled umbrellas and attaché case that somewhat usurped this gentlemanly outfit. In Paris, Lanvin was a strong collection. Great flowing overcoats, roll-necks, a loose leg pant – very chic. We also really liked Kolor whose play with fabrication, proportion, layering and colour really captures all that’s right now for a grown up man to look great.”

Traditional bench-made English shoes have become one of Mr Porter’s best selling product ranges. “We have sold brogues, Oxfords, loafers and lace-up boots from the likes of John Lobb, Church’s and Grenson,” said Bateman, “and the trend for this type of traditional English shoe seems set to continue.”

“We have picked up Missoni for next season. With the trend for knitwear being so strong and the continued demand for ‘winter colours’ from men, it really seems like the right time for Missoni who are the masters of both these things.”

Jeremy Langmead, editor in chief at Mr Porter said; “Burberry’s country gent look defines the season – all very commercial and helps us sell collections. We think it’s great that knitwear has been such a strong statement; best Missoni collection for years. Everyone layered their knitwear over tailoring, which is a great look to go for. Elsewhere there were lots of deconstructed, easy to wear looks. Comfort is in mind. Prints are strong and have been good for summer and we think they will continue into autumn – burnt velvets, jacquard looks and collection-specific motifs, for example at Dries van Noten and Prada.” 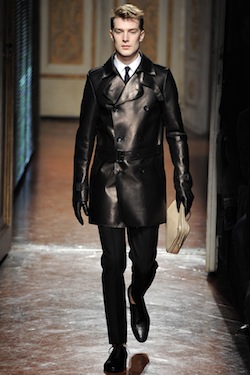 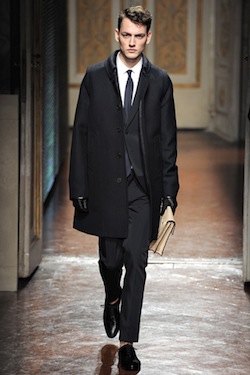 HARRODS
Jason Broderick, head of menswear at Harrods is backing roll necks as a major trend for next winter. “A trend that emerged from the shows was the presence of roll necks presented in fine fabrics, classic shapes and oversize proportions. It was near uniform in Milan and had an equally conspicuous showing in Paris.”

“Outerwear is again all prevailing from the catwalk straight to the street this season,” said Broderick. Leather, shearling and fur trims were his top coat choices. “We are launching the menswear collection from Alexander McQueen which I feel is an apt representation of the best of London’s creative driving force. With the exciting news that London will dedicate a week to menswear in June, there is definitely a more commercial focus on London and menswear in general. We will also reintroduce the Givenchy collection and launch Valentino’s outstanding collection, which was the nearest thing to couture we have seen in menswear in a while,” he said.