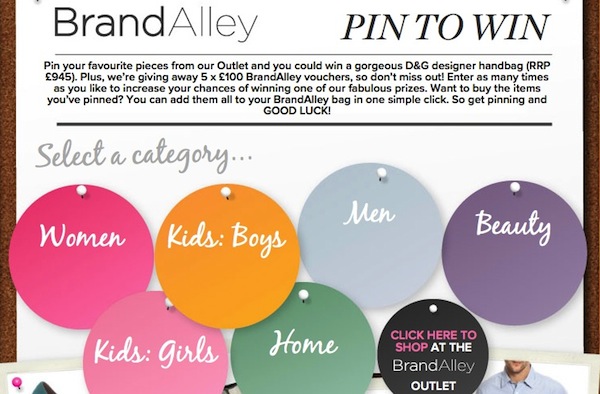 What with all the Pinning, Tumbling, Fancying and Discoveredd-ing, I’m fast getting inspirationed out*. Enough with the inspiration – I don’t need anymore! But I guess I’m an extreme case – most people don’t spend their lives scrolling through websites 1000 hours a day.

The latest, and inevitable chapter in the social curation story is that of brands and retailers using virtual ‘pinboards’ to drive sales. Not surprising when recent stats claim that 37% of men and 17% of women using Pinterest go on to buy something via the site.

Just launched is BrandAlley’s Facebook gaming app, Pin To Win, which allows users to compile boards of their favourite BrandAlley Outlet finds, which is then shared on a Facebook gallery, with the opportunity to win store credit or big ticket prizes. You can also shop BrandAlley via the app. The gaming app has been launched to highlight BrandAlley Outlet, the permanent arm of BrandAlley, which was traditionally a flash sales only site, a market that’s now saturated.

As I’ve said before, I don’t personally know many people who go in for this share-your-wishlist-on-Facebook business. None of my Facebook friends are inclined to share their shopping wishlists, and I don’t do it either – because I do all that on here. But I know it’s a different story for the under-21s, who voraciously text and Facebook their every waking thought. They’re the ones who admit to using these sorts of apps so for that demographic, I expect we’re going to see a lot more of this.

I’m curious; would you use it and why? What other social sharing apps do you use? 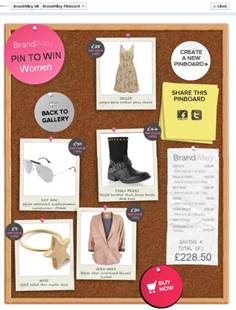 *although if you’re not then, ahem, check me out at Pinterest.com/disneyrollrgirl and  Disneyrollergirl.tumblr.com