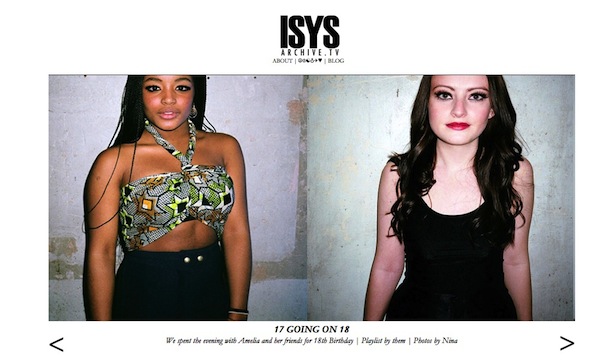 What is ISYS? An archive, a gallery, a blog, a body of work about people, what they look like, how they move and what moves them. That’s the explanation you’ll find on this addictive site, but I wanted more so I quizzed one of the founders, Nina Mandandhar…

Disneyrollergirl: What is ISYS and who is behind it?
Nina Manandhar: ISYS stands for ‘I Saw You Standing’. It’s an exploration into the meaning of style, identity in British youth culture today. It uses style as an entry point into people’s worlds, but essentially it’s about people – how they move, and what moves them. It was started up by myself and Cieron Magat. We work with a bunch of amazing contributors; Cassie Clarke, Akinola Davies, James Pearson-Howes, Lewis Teague Wright, Will Robson-Scott, Chris Read, to name just a few.

DRG: What is your creative/work background?
Nina: Cieron is behind T Shirt Party, makes the Boiler Room visuals, music videos, and something called the Back 2 Life mixtape. My background is in photography, publishing and social enterprise. I co-run The Cut, a youth mag made by a bunch of young Londoners. A lot of my photographic work is about youth culture, and back in the day I co-produced a neon-zine, Hardcore Is More Than Music.

DRG: When/why did you launch ISYS?
Nina: We launched ISYS about a year and a half ago. It began as predominantly video based content – portraits and reportage – and all soundtracked to new music. We started it because we wanted to create a celebratory portrait of Britain’s youth tribes, looking at the role style plays as a means of identification and belonging. Immersing ourselves in those worlds, whether it be a night out in a Shisha Shack in Wembley, or spending a day at home with MCs like Rage in Leytonstone. We wanted to create a home for our creative projects and the work of our peers and an archive of the things that inspire us, based around the concept of style.

DRG: You recently relaunched the site. What is different about the new version?
Nina: The new site is more focussed on creating content from scratch, and working in a variety of mediums which use the internet more creatively – from video, to mixes which we’ll produce artwork for, to posters. We will also be doing more styled and set up stuff as well as documentary. We want to make more tangible products too. This year we’ve got a book of the ‘What We Wore‘ format coming out and we’ve got a show on NTS radio coming up on 15th March. Our biggest project that we’re just beginning to work on is a project for Tate Modern’s new Oil Tanks space which is really exciting!

DRG: Where do you find such amazing content?
Nina: Although we are big believers in the gems living undiscovered on the internet, a lot of the content for videos is found just through being out in the world, meeting interesting characters out on the street. The same goes with a lot of our blog posts; they’re often scanned books, or original personal photos from individuals that we’ve got hold of. Cassie Clarke who also runs blog Mixed Up, is a research superstar. She’s like an image super sleuth, and is always digging up interesting stuff!

If you want to see more of ISYS I suggest you set aside a good hour at least, it will be so worth it…