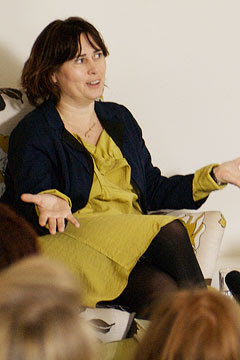 Last Thursday I attended the Fashion Business Club talk where Vogue.co.uk editor, Dolly Jones interviewed Vogue editor, Alexandra Shulman. Shulman is under intense pressure to deliver a magazine that’s still relevant in the current climate – challenging when your target reader is the person being hit hardest by the recession and advertising revenue is in the doldrums. Yet the lady seated in front of us did not look stressed at all. In fact she came across as extremely likable, good at her job and knowing of her audience, despite having never edited a women’s magazine before arriving at the helm of Vogue 17 years ago.

I’ve condensed her most insightful answers into soundbites, but you can read more here.

On getting the Vogue editor job 17 years ago: “It was the last thing in the world that I wanted to do.”

On fashion as a scapegoat for the world’s ills: “Fashion has become a whipping post for everything from body image to celebrity culture to the economy. The media picks on fashion because it can use fashion pictures to illustrate their stories. A fashion picture looks good so makes you more likely to read the story.”

On how the recession affects Vogue’s shoots: “The emphasis has moved to styling as opposed to photography. I have a great team and their styling tips have become more useful for our readers.” [This is so true, I loved the styling feature in the current issue…]

Tips for up-and-coming designers and what a small business needs to survive:
*Product is key – make your message clear
*Be consistent in your offering
*Press is important but needs to be focussed, it’s not necessary to get celebrity endorsement from the outset
*Find a business partner to work with (“if you are going to be a designer, it is a business. You can’t just be an artist.”)
*Accept it takes time

On supermodels: “They became too powerful. When the models were getting more attention than the designers, the designers started sourcing Hollywood”

On interns: “I can’t tell if an intern is good at styling or writing from just seeing them around the office but the successful ones are smart, efficient and make an imprint on you without getting in your face and being irritating.”

On the future of fashion magazines: “There’s a lesson to be learnt from what’s happening with newspapers – they’ve killed off the papers in favour of putting content online, yet online isn’t making the money.”

On the magazines she reads: “I read the New Yorker for unbeatable journalism and I love interiors magazines. I get all the magazines so I don’t need to buy them but I look at them to see who’s copied us! I noticed Grazia used our ‘More Dash Than Cash’ idea but called it ‘More Dash, Less Cash’.”

On LOVE: “We were very competitive with Pop so when Conde Nast took on LOVE I wasn’t sure how it would play out. But it’s very different. Its focus is fashion and celebrity, it’s industry-insidery. Ad-wide they’re a lot cheaper than us, but our circulation is 220,000 and they’re aiming for 40,000 so it’s very different.”

On the importance of fashion shows: “Fashion shows are a good marketing tool yet different clothes work in different ways. Sometimes doing catwalk collections sends things on the wrong tangent. It drives me crazy, putting clothes in the magazine that people can’t actually buy.”

Just…Wow Quote of the day