What makes a ‘fashion designer’?

I wasn’t going to comment on Sarah Mower’s scathing critique of Henry Holland’s show but in light of the hullabaloo* surrounding the Lindsay Lohan/Ungaro debacle, I couldn’t resist.

Question: what is a designer? Is it someone who has an understanding of the entire design process, who cuts their own patterns and pins their own toiles? Or is it someone who has an eye, is good at styling and can tune into the zeitgeist despite not having a design background? What I’ve learnt from the last few weeks is that fashion is subjective and there is no cut and dried answer. I sat through the Kinder Aggugini show, non-plussed at what I was seeing – ‘derivative… Galliano…not quite there’ went my scrawls while post-show I listened to Hilary Alexander and Michael Howells praise him as the next big thing. Henry Holland’s show (below) was pretty much laid into by Style.com’s Sarah Mower which was weird as she also has a role at the BFC to promote emerging British talent and Holland is one of her fledging designers. Mower’s beef with Holland was that his shows have become media circuses that revolve around his celebrity playmates and his design skills are little more than jumbling up a few eighties references without much finesse. Her concluding line was, “perhaps it would be cleverer to quit the runway altogether and throw parties instead.” Ouch. 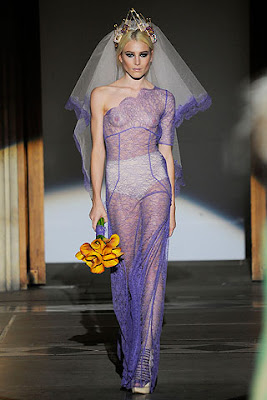 Can a ‘designer’ who didn’t study design or train as a designer rightfully call themselves a designer? Well, that brings me to Luella. She came from a similar journalism background to Holland (although hers was Vogue to his Sneak) and if truth be told, it is the styling and clever pop culture references that keep her brand at the forefront of British fashion. There’s really nothing new in terms of design innovation at Luella and yet she is considered a real designer against Holland’s marketer-posing-as-designer.

And so to Lohan. Where to start with this? The girl is an actress who has made music and then decided she wanted to have a go at fashion. And who could blame her? The celebritisation of fashion means that everyone has had a play at ‘fashion designer’ and from what I know, her leggings line has sold well. But to install her as creative director of Ungaro, a luxury house of forty-odd years standing. Really? I didn’t buy it from the beginning and I’m glad it failed. According to WWD, it was “quite simply, an embarrassment“. Yikes, don’t hold back WWD!

A designer has to take the job seriously, they have to live and breathe the role and if they don’t it shows oh-so-clearly. Where do things go from here? I am really hoping this will be the end of the celebrity-as-model, celebrity-as-designer, celebrity-as-author trend. It won’t happen overnight but this could be the catalyst. 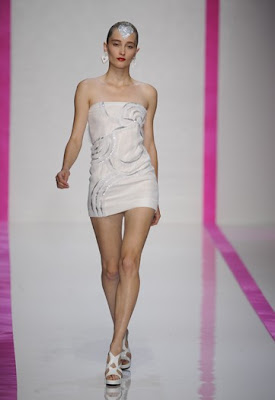