Is it curtains for fashion shows? 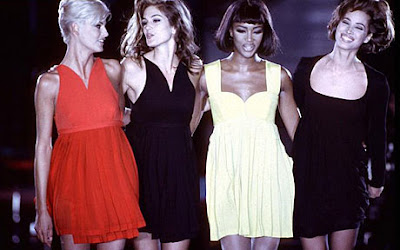 Rumours are suggesting that fashion shows are well, going out of fashion. Blame the economy, blame the internet, the fact is that some designers are bailing out of the show circuit, leaving crater-sized holes in the international fashion week schedules. Is this a good thing? After all, it’s no surprise that fashion shows guzzle more money than Bernard Madoff, perhaps those funds could be put to more sensible use? But without fashion shows, what would Paris Hilton do for kicks? Here I present the argument for and against.

The drama! The excitement!
The clue is in the word ‘show’. Go to a Galliano, Chanel or McQueen show and you are in for a fabulous theatrical treat worthy of a gala night at the Royal Opera House. It’s all there – the anticipation, the pre-event people-watching, the fanfare of the show itself, the backstage drama, the music/hair/make-up/styling. The tears, the tantrums, the models! Not to mention the crackle of excitement when word gets out that Prince, Grace Jones or Michael Jackson is in the house. (Who can forget Julien MacDonald’s tacky but rather clever coup of a Jacko lookalike at his show many years ago? Or the legendary Philip Treacy shows featuring Grace Jones slithering down the catwalk to a techno soundtrack and rapturous applause?) If you’re lucky enough to get a ticket to a McQueen show you are very priviledged indeed. Whether or not the clothes are ‘you’, you are guaranteed a night to remember (and not just because of the 90-minute wait you will quite probably have to endure for the show to start).

Front row fun
No shows equals no front-row politics which means less fun for the rest of us. Because who doesn’t love to watch the mini soap operas unfolding before us as we decode the body language betwixt Miss-editor-of-a-glossy, Miss-WAG-in-training and Miss-too-cool-for-school-indie-pop-star all squashed on the same bench in full view of, well everyone?

I’m a celebrity (no, really I am)
Much as many a serious fashion editor hates celebrities (well wouldn’t you if you were trying to do your job and some B-lister delayed the show by pandering to the paps?) it must be acknowledged that celebs do have their uses. After all, if it wasn’t for the paid-for celeb attendance at certain shows (cough Miss Sixty cough), would the photographers even bother to cover them? And less publicity means fewer sales. On a wider scale, it could be argued that in recent years it’s the celebrities who have given fashion its huge following by the general public. So get rid of the shows and the celebs could well lose interest in Marc, Karl and Luella altogether.

All about the goody bags
Perhaps most importantly, if we have no shows then we certainly have NO USE FOR GOODY BAGS. Now this is serious stuff, no? For a seasoned show-goer, those little packages of hope that sit on our chairs provide a welcome respite to the grind of 9am-9pm toing and froing with nary a sandwich or a cup of tea to provide a break in the proceedings. At least a lovingly tissue-wrapped gift makes us feel like we really are wanted and cared-for (yes, we are that gullible, lack of food and sleep makes us feel a bit deluded).

The ‘presentation’ – it’s the new black
Yet on the flip side, there are many good reasons to jettison the show format. On the menswear front, this week Marni cut back its fashion show to a ‘presentation’. Definition: hot male models milling around amongst ‘guests’ sans catwalk, ie up close and personal. Er, what’s the problem? Presentations mean less hanging around, a better view of the clothes and a more civilised atmosphere. Sign me up immediately! Of course, they also mean rather dull hair/make-up/styling but if budgets are being slashed then I’m afraid it’s au revoir to expensive stylists and make-up artists.

Surprise me
The demise of the traditional show could lead to designers being more imaginative in how they present their collections. Stella McCartney was ahead of the curve last September when she showed her Adidas line on real athletes doing -gasp! – actual workouts. Although the photos don’t look quite as special in the runway reports, an attention-grabbing concept is still a plus. How nice to not know what to expect until you get there, rather than steeling yourself for the inevitable cold, derelict warehouse slap bang in the middle of nowheresville.

Let’s meet in the middle
Which brings me neatly to my biggest point in the debate. Ultimately, fewer shows mean less hanging around and pavement-pounding and potentially more time at my desk Getting Work Done. People forget that fashion editors still have a department to run and that magazines don’t stop functioning simply because the show circus is in town. So to conclude, how about a compromise? The big guns – Dior, Armani, Louis Vuitton – who can pull the celebs and supermodels could show in the mornings while the smaller labels could have presentations, parties, videos, soirees – whatever cool, innovative ‘happening’ they can think up. This would keep the buzz going, keep the foreign press/buyers in attendance (Brit designers do put on the best parties, no contest) and keep the designers in the news (celebs love a fashion party even more than a show). And of course, most importantly, we could carry on the tradition of the Goody Bag. There you have it, problem solved.