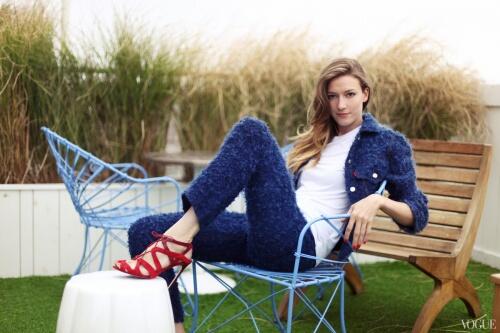 It makes up the bulk of my wardrobe, so I’m happy to see so much excitement going on around denim at the moment. From Selfridges’ impressive new denim studio and summer takeover, to the bespoke offer from 3X1, to MIH monogrammed jeans, to Marques’Almeida’s scissored deconstruction, there’s no end of clever things to do with denim.

And then there’s the Faustine Steinmetz approach. Taking the standard trucker jacket shape and 501 jean, this newbie designer has done something that looks like it could be denim but definitely isn’t. 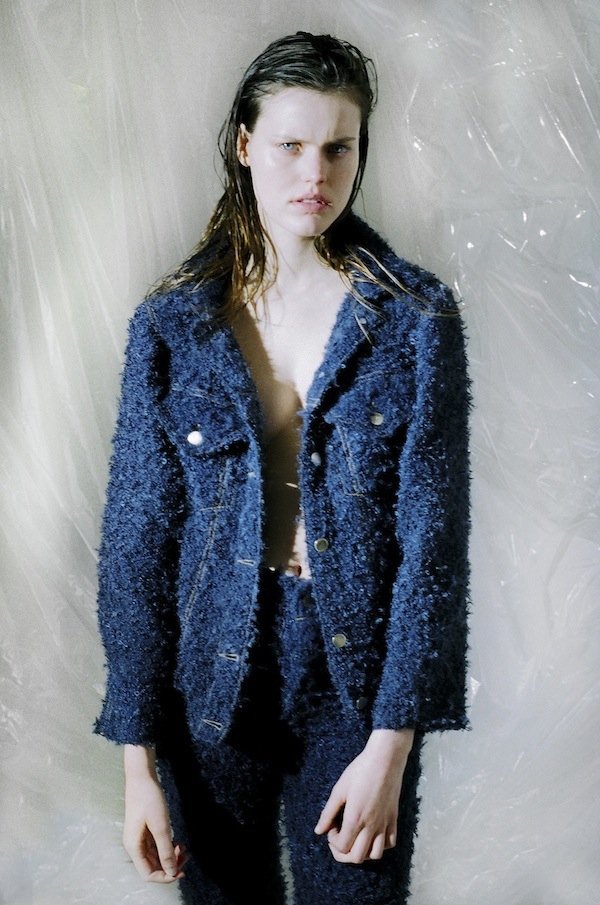 Paris-born Steinmetz is big on handcraft and longevity in fashion and also plays around with the codes of identity. Her AW13 collection (arriving at Hostem this month) is based around the suburban uniform of her teens, but she subverted the standard denim jacket and jeans by taking those recognisable shapes and transplanting denim with tactile hand woven mohair. As a product of the digital age, she bought her first hand loom on eBay, then set about teaching herself weaving via Youtube videos – a very modern meeting of age-old techniques and millennial technologies. 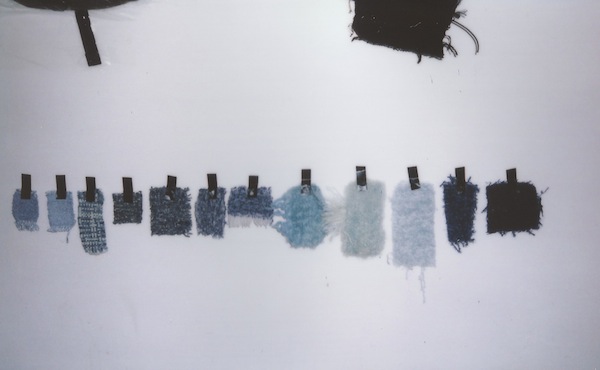 Which brings me to Steinmetz’ digital strategy. When I Googled her name, I discovered a brand presence across a number of social platforms – Tumblr,  Instagram,  Facebook, Pinterest – and brought this up in our email exchange. I was interested to know if this was a planned move from the outset or simply the work of a digital native.

“Actually it came a bit as a surprise,” says Steinmetz. “As a good French girl I like moaning! About Facebook and digital media in particular, but when I posted a picture of my clothes styled by Robbie Spencer for Dazed on Facebook, I was blown away by all the positive things it brought to me. I got contacted by a few magazines, but most importantly I got put in contact with Christie Fels, the buyer of Hostem that way. I think it was only then that it hit me and I realised how important it is to promote yourself on digital media. Since the collection was released we have been featured quite a lot in paper magazines, but it didn’t really bring us anything in comparison to Facebook. It’s much less glamorous but it works!”

But Steinmetz points to a less wonderful side to social media too. “There’s a bad side to these platforms for young designers. People reblog your work on Tumblr, Instagram etc without crediting the work and that’s a pity. My friend is a Tumblr addict so she sends me pictures of my clothes she finds with comments under them – ‘who did this?’ ‘where can I find those…?’” 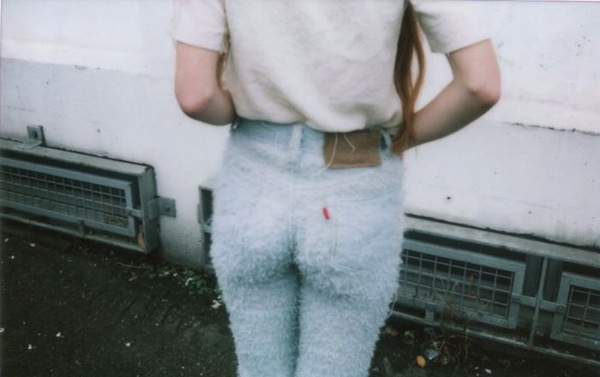 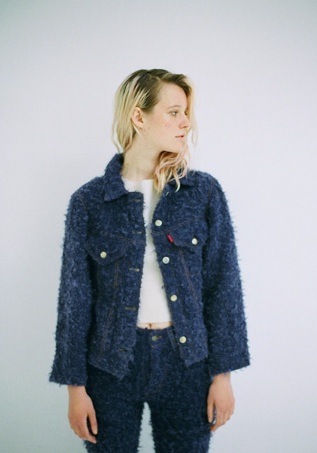 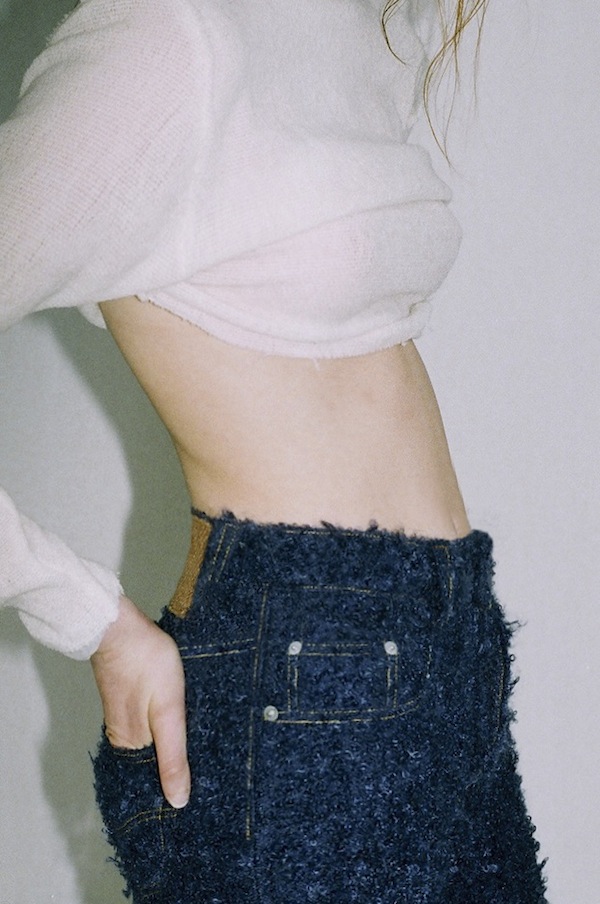 Steinmetz is about to get a whole lot more attention when her collection joins the likes of Phoebe English, Rick Owens and Junya Watanabe on Hostem’s new womenswear floors this autumn.

This is undoubtedly a fine time to be an emerging British-based brand with a unique point of view. Amongst the sea of superbrands there seems to be a hunger for discovering the next Christopher Kane from forward-thinking retailers like Hostem, Dover Street Market, Avenue32 and even Mywardrobe. And as well as a creative, craft-conscious aesthetic, it’s a savvy approach to marketing that will give the next generation of talent the edge. 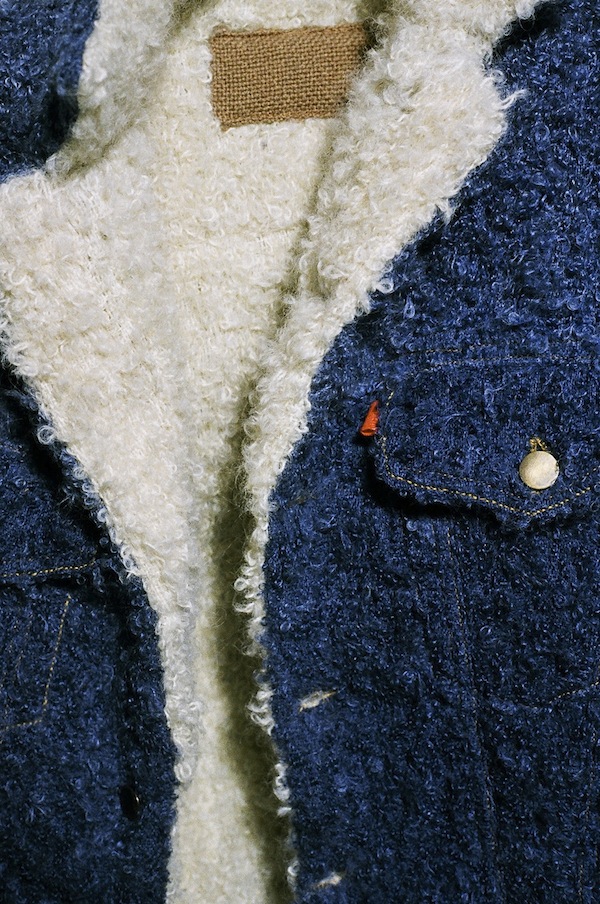 A selection of Faustine Steinmetz is available via her online store now or exclusively at Hostem this autumn.