Doing it for themselves 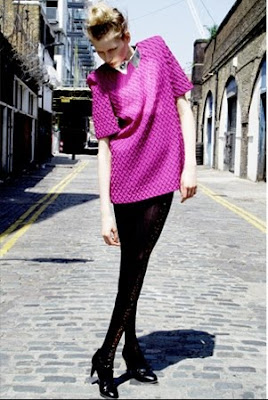 As the traditional magazine industry shrinks into oblivion, online publications continue to grow. I’m not on one side or the other, I want both to survive and coexist as I believe they can. That said, for young up-and-comers, online is an infinitely easier nut to crack. Rather than competing with umpteen other stylists/writers/photographers for those few creative crumbs thrown via the pages of Plastique/Ponytail/125, the online-savvy are doing things for themselves and setting up on their own.

I have been watching Underlining Colours since they made themselves known to me through this blog. They are a collective of graduates from University of the Arts London, each with their own discipline. The site is really simple, combining a mix of illustration and photography, and has its own identity, something that isn’t easy to achieve. Every quarter, the contributors -Niclas Heikkinen, Hong Chu, Salina Chu and Asami Uetsuji – choose a muse and a theme and create an issue around them. The latest issue is called Bruised Heart. I met Niclas at London Fashion Week and we thought it would be nice to do a wee interview.

DRG: Tell me how you all met? Did you all study fashion?
Niclas: We were all more or less directly involved in fashion although we did different stuff at uni from photography and fashion to graphic design. After streetcasting the first muse, Asami and I contacted Salina as she had approached Asami earlier and proposed to do something together with her. We loved Salina’s illustration and thought the project needed people from different disciplines. But the three became four as soon Salina introduced Hong to the group, who was extremely talented both in illustration and animation and it turned out later on that he was vital for putting up the whole website. So the core group was a little bit like the Fantastic Four all having different skills.

D: Whose idea was it to create Underlining Colours? What is the purpose of it?
N: Initially we had only thought about doing one project around Jonathan, who was the guy we first scouted. Then we thought it might be worthwhile and fun to continue since we were doing a website around the project, so we discussed doing an online magazine/gallery. The idea was to take this journey with the muse and produce some work illustrating it. The casting was really important from the beginning. We had already done our first published works back then and wanted to do something different to what we would normally do for magazines and what people would ask us to do and therefore we wanted to work with people (muses) who we wouldn’t normally get to work with. We were inspired by artists such as Diane Arbus and Araki and wanted to create a relationship similar to what they did with some of the people they worked with and show more of the model’s personality in the work. In the beginning, the models we chose were way too short, way too tall to be with an agency or had scars on their face etc. We wanted to challenge the idea of beauty but we also had to keep in mind that our models would be comfortable enough in their own skin to be involved in this kind of project. It’s not easy for anyone to show what makes them different to other people and show differences that can be sometimes thought of as imperfections. We believed that there was a story behind those imperfections and that inspired us. It’s actually been interesting to see that some of the people we have worked with have gone through a lot in their lives and these stories might be too much or perhaps too personal to put online – you get very protective about them.

How do you agree on the themes for the magazine?
At one point we decided to drop the idea of streetcasting, it was getting too personal and deep. We also didn’t think it was fair for our muses; it felt as if we let them down as soon as we had finished the project and needed to move on and get to know the new person we were working with. The whole process working with a muse was also very time-consuming and personal so soon we started working with professional models who would already know the nature of the business. The themes were also introduced to bring more cohesion and direction to each issue. These themes would evolve from observations in both art and fashion and also in the world we live in but they also had to be universal in the sense that everyone who was involved would be able to relate to them as well as our readers.

D: There are a number of online magazines out there now, how do you get fashion PRs to believe in your work?
N: Some of the PRs have seen our other freelance work and they also know that we do very careful preparation and ensure we do our best in every single issue we do. In order to do the best quality of work we only have four issues a year since we are all doing our own jobs at the same time. Some of the PRs have been supportive from the very beginning which we are very grateful for. However, it hasn’t been just the PRs we needed to win over, we also needed to ensure the model agencies, as well as other artists we’d like to work with, would see the point of working with us.

D: Do you have bigger plans for Underlining Colours? Will you expand the magazine to include other contributors?
N: We are always open and looking for new contributors. We were more limited before because of the way we worked, however we are changing. Our latest find is the artist Quentin Jones, who is working on her second assignment for us and there will be some other talented people in the next issue as well. For a while now we’ve been toying with the idea of doing a limited edition magazine or book, maybe even with a different name, but we need to get the financial backing sorted.

What do you all do outside UC to earn money?
Some of us freelance and the others work full time both in fashion and in creative industry – that’s part of the reason why we only find time to update the website quarterly.

How do you see the future of magazines? Do you think there is room for traditional and online to coexist? Which are your must-read paper mags?
I think paper and online mags compliment each other. There are some great online mags/blogs where you get the information first and they have the freedom to cover stuff you wouldn’t necessarily read from a paper mag – this freedom is really important I think. I like the fact that blogging is challenging the hierarchy of the information flow as well as the traditional fashion gatekeepers and how and how fast we get the information. I think this makes the mags step up their game too and go back to basics and see what they are really there for which is vital for any business. I’m sure there are lots of people like me who love to buy a mag and keep it in their archives. Personally I love buying quarterly or biannual mags such as Pop, Arena Homme +, Man About Town which are much more than a magazine to me. I look at the magazine as a whole, not just the editorial, they are more like coffee table books for me I guess. For instance, I loved what M/M did for Arena Homme +. I also tend to buy monthly magazines such as I-d, Dazed and Vogues, depending on the issue and the editorials and I also skim through a whole lot of other ones. Michael from Blow PR asked me once where I find the time to read all these mags and find out about designers – it’s a mystery for me too!