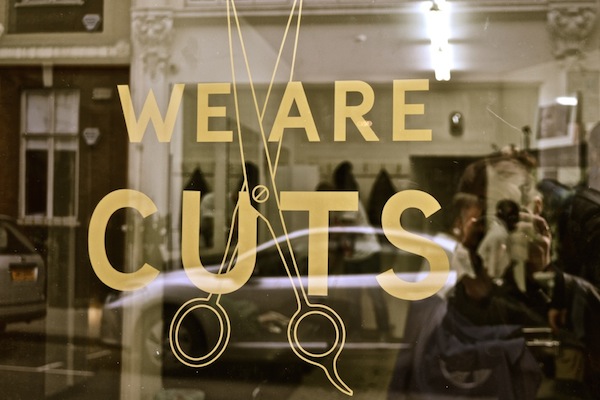 Cuts is where I have been getting my hair cut for most of my adult life. I went in to get my first short hair cut (I always wanted to look like one of those i-D girls), and like many of its clients, I never left. Cuts is like family, the Soho-based ‘salon’ is like a rough ‘n’ ready living room with barbers’ chairs; the clients come for haircuts or just to hang out. The staff are like the sons and daughters that grow up, leave and keep popping back. Oh and there have been one or two dramas along the way too.

And director Sarah Lewis has captured all this and more in a documentary that’s become not just about a hair salon, but about relationships, about London and about a changing millennial society. The back story of Cuts is interesting. My attachment came from back in the 80s, reading about its co-founder James Lebon in i-D when Cuts was part of the beyond-cool West London scene. (Yes, West London was once way cooler than Dalston – imagine!) Cuts was closely related to the Buffalo crowd who arguably pioneered today’s ‘agender’ look of boyish beauty; look out for the likes of James Lebon, Mark Lebon and Neneh Cherry in the trailer. As such, a diverse clientele was built – a creative crowd from the music, fashion, media and art industries. Over the years, Cuts moved to Soho and the dramas and stories continue to unfold throughout the documentary.

But the film isn’t yet complete. Funding is needed for the final stretch, which is why the producers have set up a Fundee crowdfunding campaign. I get lots of emails about crowdfunding campaigns, they’re a good way to raise money, yet everyone’s doing them, so it’s become competitive. Here’s the CUTS THE MOVIE trailer, should you be interested in donating to a documentary that’s as much a story about London style as the history of a hair salon.