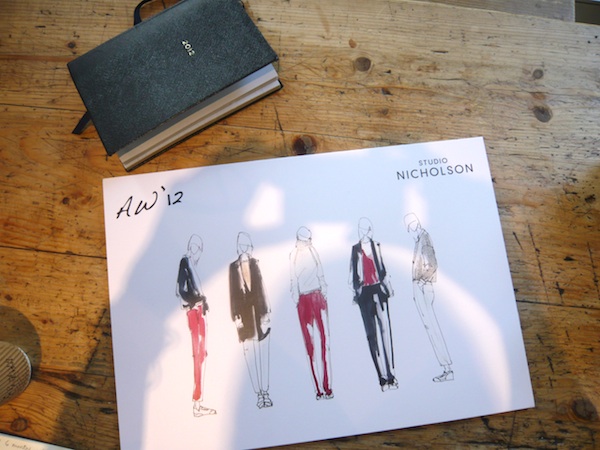 As I mentioned the other day, I’m all over the current crop of female designers who make functional-but-beautiful clothes for women. 24/7 clothes you can whizz around in for meetings and appointments, but that also scrub up well for evening with a switcheroo of shoes and jewellery. Joanna Sykes does it (first for her own label, then for Aquascutum and soon for Nicole Farhi), Sophie Hulme does it too, Phoebe Philo has made it into a fetish and my latest under-the-radar discovery is Studio Nicholson.

What I didn’t know about Studio Nicholson’s designer Nick Wakeman is that as well as designing casual womenswear in the 2000s (for her own brand, Birdie and also Supra Girls), she spent a chunk of time designer menswear at M&S. Not something to boast about you’d think, but Wakeman begs to differ. As a result, her approach is highly commercial and rooted in wearability and fabrics. “I get told I spend far too much on fabrics”, she says, before launching into raptures about textures, weaves and “special character”, not to mention range reviews and merchandising. Cut and proportion-wise, Studio Nicholson is about what Wakeman calls, “a nonchalant cut. It’s not Fashion. The coolest women I know just wear what they wear, they have their DNA.” So that means lots of softly tailored trousers, boyish knits and good coats that are given individuality by the person wearing them. (I love how her moodboards are full of streetstyle photos of everyday people looking relaxed but polished.)

Wakeman asked her buyer contacts what pieces they were missing then set about producing wardrobe building blocks that are less about statement items and more about “beautiful, simple forever pieces, so you could almost go to your wardrobe with your eyes closed and just pull it out.” Which I’m sure we’ve all heard before and a lot of people do it really well (Phoebe, Stella…) but while Wakeman is a fabric geek perfectionist, price is also key. Studio Nicholson is positioned between a jeans brand and high fashion so although she overspends on fabrics, she saves money elsewhere. “I don’t want to make a coat that costs over £700. It’s not impossible, I just don’t make it in Italy, I make it in Portugal.”

As with lots of menswear, the Studio Nicholson palette has been restricted to mostly neutrals until now. For AW12 though, we’ll be seeing pure primary colours added to the navy, ivory and grey. Plus some softer silks included in the mix too. It all fits with the current vogue for casual-luxe unisex styling but truth be told, it’s something Nicholson has always done, inspired by a love of Japanese streetwear.

A sneak peek of beautifully presented SS13 sketches shows more pure red and impeccable white shirting. And beyond that? It’s early days but Studio Nicholson stores are inked in the business plan, hopefully for 2014. Until then, the collection can be found at The Shop At Bluebird, Folk,  KJ’s Laundry and online at Studionicholson.com 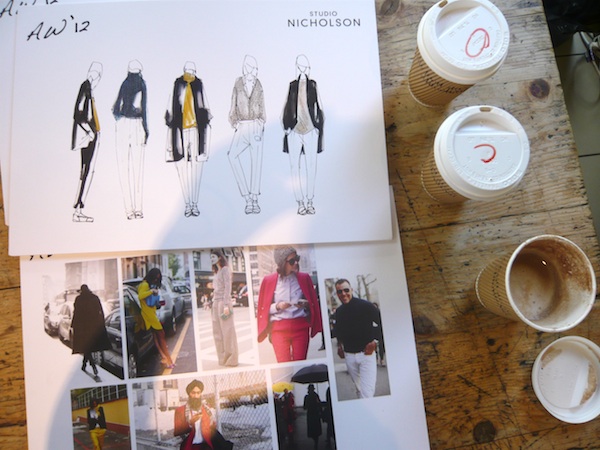 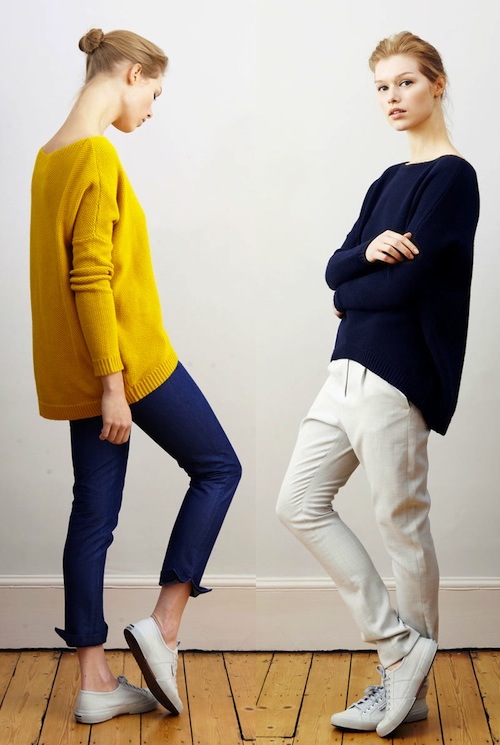 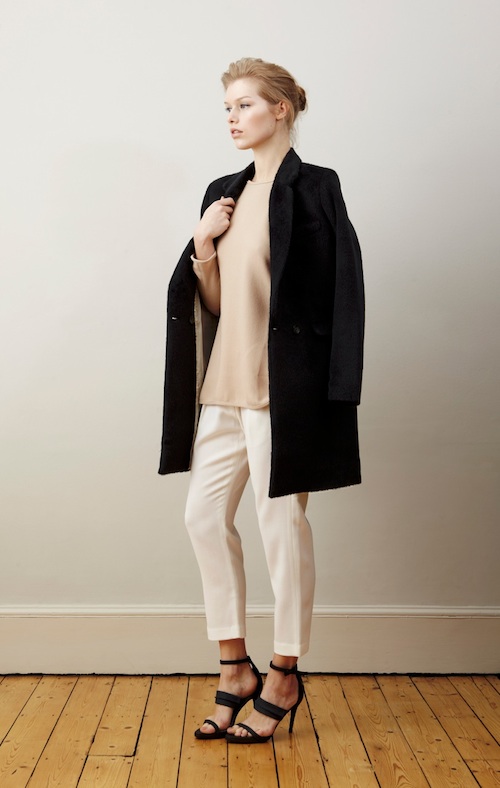 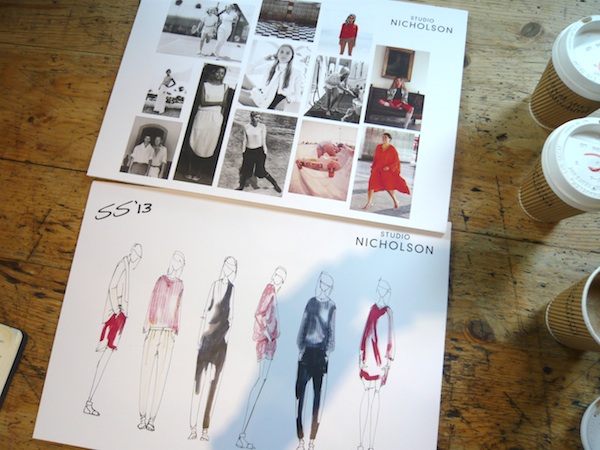 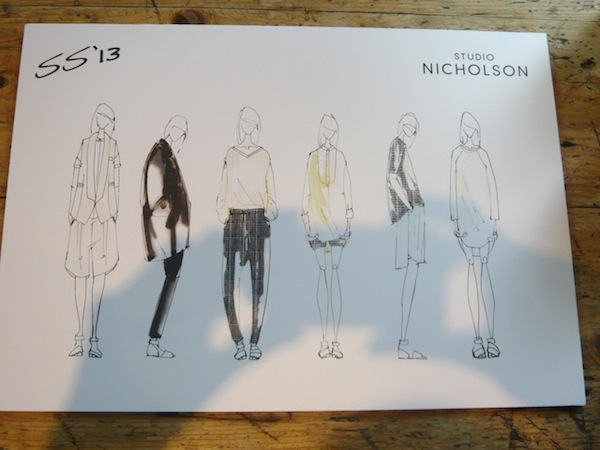 To stop our conversation descending into one long torrent of ‘fabric nerdiness’, I asked Wakeman to email me her favourite fabrics. This is what she sent me… 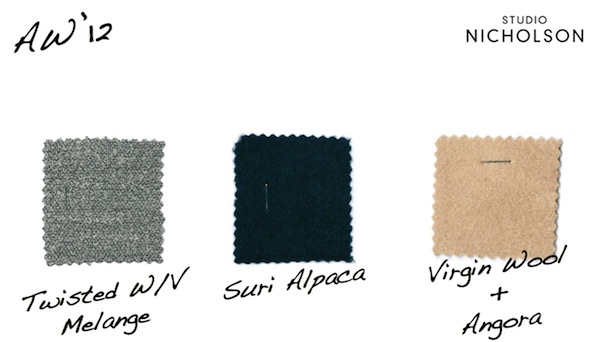 Re ‘fabric nerdiness’, attached are swatches of my three chosen fabrics for AW12. All fabrics are from superb Italian mills that I work with each season for their offer of finish and quality and because they have really innovative designers at these mills.

Below are my thoughts on these fabrics..

1. Twisted Wool / Viscose Melange – This fabric has a unique character because of the twisted melange yarn. It’s a woven fabric, but looks like a knit – I used it for AW’12 on pants and shirts and I think the trick is sometimes to use fabrics in styles not quite how you would expect them to be used. This was the case here and produced a couple of bestsellers.

2. Suri Alpaca – This is a beautifully soft fur pile due to the Alapaca content in a rich Navy with a high sheen. You cannot help but run your hands over this – I made our classic Crombie in this cloth which produced a really luxurious coat.

3.  Virgin Wool + Angora – I love this cloth. Its a menswear fabric, heavy and robust with a beaten texture to it and again is super soft because of the Angora content. Our signature blazer was made up in this fabric and was a brilliant take on a very traditional menswear blazer – Italian menswear at its best and reminds me of something you might see from Brioni or Loro Piana.