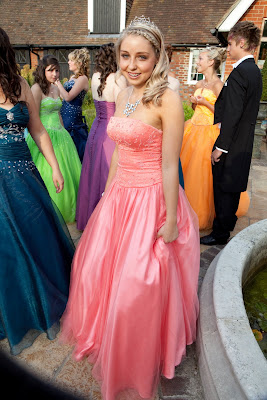 Lovely Claudia who did work experience with me last year is in today’s Times magazine. Their reporter followed her and two other teenagers around at their school proms and published a feature in today’s supplement. Claudia also sent me this picture which wasn’t used but I absolutely love* – behold that rainbow of dresses! If I’d been in charge, this would have made the cover of the mag rather than boring old Brad Pitt.

I’m slightly resentful that we didn’t have proms in my day, God knows we had seen Grease enough times, we would have loved a prom. It’s also interesting that prom is only just being picked up by the mainstream UK media now. A few years ago when I worked on teen magazines, we would do a prom issue once a year and oh, what a production it was. We’d do the prom fashion shoot, the prom makeover, the prom beauty feature, the ‘Are you a Promzilla?’ quiz, the Win a Prom competition and on and on. But could we get decent prom dresses to use in the fashion shoots? No we could not, the only time you could get dressy dresses was at Christmas so we would cobble our features together out of whatever bits and pieces we could find. Here’s a message for high street retailers – prom is bloody massive, start exploiting it!

A cape to covet Madonna remembered