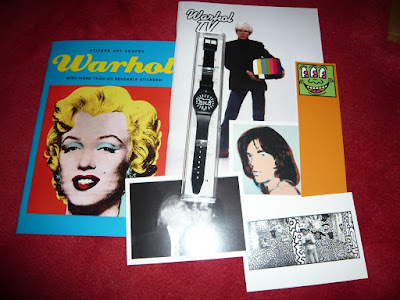 I just made it to the Pop Life exhibition at the Tate Modern before it ends on Sunday. Some brilliant work in there but truthfully I was mostly excited by the Warhol and Haring rooms. The YBA stuff just isn’t visually exciting to me and I don’t really care about their ‘message’. Plus I guess I grew up with the excitement of Warhol and Haring so they mean more to me emotionally.

There was a reconstruction of Haring’s famous Pop Shop with – genius! – a real life shop within it, as in, a person behind a counter selling Haring merchandise and bringing the concept to life. Keen to participate in the art imitating life imitating art scenario, I made a point of buying my Keith Haring watches from the Pop-Shop-as-Art-Installation instead of the bog standard Tate bookshop downstairs. How very post-post modern of me.
I also adored the Warhol TV clips (Haring and Scharf… together!) although was sad not to see the Curiosity Killed the Cat video that Warhol directed – now that was a work of art. *Sigh*… if Andy Warhol was alive today you just know he would have the best blog of them all.

Quote of the day Art vs Commerce