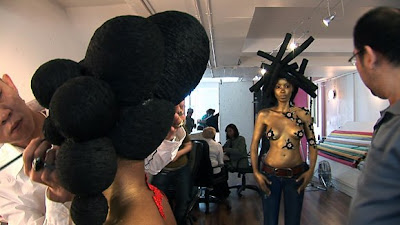 I love an off-radar fashion film and even better if it’s a documentary. Afro Saxons is a newly released film following four hair salons competing in the UK’s biggest Afro hair competition. Amongst the competitors are Thai couple George and Apple who are obsessed with Afro hair, Angela, a braid-artist and Wayne and Cyndia, leading junior stylists at the UK’s biggest Afro hair chain. Reviews are mixed but I’m willing to give it a chance – how can it not be entertaining with all that eye-popping hair-sculpture going on? If you’re interested you’d better be quick, it’s showing in very few cinemas until the end of next week.