Where east and west meet in the middle 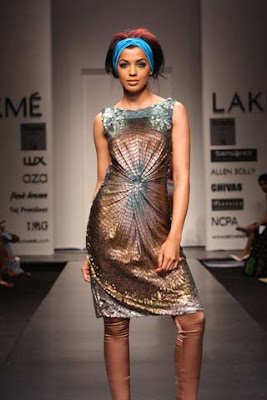 One of the things I found hard to get my head around when I was working in India last month was the disparity between traditional design and modern fashion. The magazine I was launching was an international title which is nothing new, as the emerging markets are opening up of course all the magazines want a presence. Elle, Cosmopolitan and Marie Claire have been in India for a few years, Vogue launched last year, this year should see Glamour, Grazia, In Style and (I believe) Harpers Bazaar. What was confusing was that my initial editor (an Englishwoman) made a point of saying the magazine needed a 50-50 mix of Indian and International fashion and features while her Indian successor insisted that references to Indian traditions were kept to the absolute minimum. This meant no mention of saris, kurtas, mother-in-laws or maids if we could help it. As the very person this magazine was targeting – the single middle class, twentysomething working woman – her reasoning was that the modern Indian woman wants to be ‘international’. She travels abroad, she watches American sitcoms so she wants access to those brands and lifestyles that she has experienced in the western world. All very understandable, however I couldn’t help feeling that it was a bit of a shame.

Here is a country with such great history and culture, not to mention an amazing textile heritage, but to have any hope of succeeding outside India or appealing to the new Asian middle classes, designers have to move away from traditional Indian style and design with a more western-influenced eye. The same seems to go for Chinese and Russian fashion (example: Kova & T). Clearly, a balancing act is needed. The designers that inspired me when I was in Mumbai were those like Drashta which combined cocoon-like western shapes with the sequins and saturated colour we associate with India. Anupamaa designs simple kaftans and silk shifts in the most breathtaking fabrics, while Manish Arora is now a household name with his wacky Indo-Western psychedelic-pop prints. I’m not knocking Wendell Rodricks or Gauri & Nainika, their accomplished designs are certainly worthy of attention from overseas but will find it harder to stand out amongst similar fare from American and European designers. The ultimate challenge for designers from emerging nations is learning how to design for the western market while throwing in a taste of local flavour that reflects their heritage.