What the movies don’t tell you 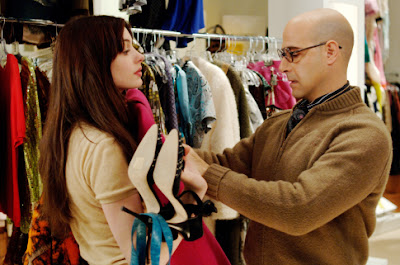 I’ve no idea who started it but there is some kind of myth that working on a magazine is glamorous. Some people seriously think that fashion editors spend their lives gliding around offices swathed in Marni and Chloe layers, having their hair zhuzhed up by Guido Palau and yapping orders to their long-suffering fashion assistants. A friend of mine once told me he wanted to become an assistant because he literally imagined it would be a simple matter of passing things to his boss. ‘I thought it would be like we’d go on a shoot and Sally-Anne would say “Bruce, please can you pass me that hanger”, and I would hand it to her and that would be ‘assisting”, he revealed sheepishly. This is what happens when you have too many TV shows and movies set in the fashion magazine industry. People think it’s all about the Starbucks coffee and the Christian Louboutin statement stilettos.

This is the busiest time of year for working in a fashion department on a magazine. Firstly, the fashion editors are finalising details for their Big Summer Trip, the overseas shoot. This involves not only booking photographers, models, hair and make-up teams and production companies (not all magazines have bookings editors to take care of this tedious aspect of the job), but liaising with said production company (which is often in a different time zone) to start sourcing appropriate locations and props for the various shoots and booking everyone’s flights and hotels. The Big Summer Trip happens immediately after New Year so everything needs to be done and dusted as much as possible before Christmas as most PRs and model agencies shut up shop for the duration. This all needs to be juggled at the same time as getting in the last few samples which make up the final pieces of the jigsaw puzzle that is a fashion shoot. Inevitably, it’s only at the eleventh hour that everything starts to gel and the real creativity starts flowing. You decide that the one thing you need that will really make this shoot sing is a vintage sailor hat and you have to have it. Now.

Did I mention the carnet? Oh lordy Lord. I don’t know who came up with this wretched idea but when you are shooting abroad you need to have a document called a carnet which is a typed, detailed list of all the clothes, accessories and other accoutrements you are taking so that the customs people know you are not smuggling the stuff abroad to flog. Not only does the list have to be perfectly typed with no mistakes (if there are any, it gets sent back and you have to do it again), each item has to be numbered on the list, with a corresponding numbered sticker attached to the garment. Readers, when you are taking five trunks of clothes abroad it takes forever. And guess what makes the job even harder? When everything is arranged in just the right order on the rails next to your desk, you can guarantee one of the freelance subs will casually waft past and start flicking through one of the rails as if in an exotic bazaar. “Ooh, are these floral kaftans in the shops now?” No, they’re spring-summer, that’s why we shoot the pictures abroad and not here. “How much are they?” They’re not for sale, this isn’t a shop. ‘Have you got a cardigan I can borrow? I’m a bit cold and I’ve forgotten mine. Can I wear this Stella one?” Every magazine office does actually have an ‘office cardigan’ but it’s usually a forgotten, no-label misshapen thing from a catalogue, not a pristine next-season cashmere offering by Stella McCartney.

For some reason, people think that fashion editors aren’t really doing proper work and that their ‘tools’ are just for show. So the clothes rail becomes a useful piece of furniture for random staff to plonk their coats on while the ‘fashion cupboard’ (not literally a cupboard, more a small, tardis-like room with lots of shelves and rails) becomes their personal changing room. Having said that, the fashion cupboard does come in very handy in an all-women environment. Rather than fleeing to the loos for a weep when someone’s having an emotional moment, they tend to run to the fashion cupboard which is a tad more private. The cupboard is also a good place for sharing office gossip and making confidential calls (yes, there’s a phone in there as well). At this time of year though, the fashion editor also has the office party to contend with. While she’s doing battle with the carnet and juggling the figures (oh yes, I forgot to mention she is also in charge of a multi-thousand pound shoot budget), pandemonium is breaking out around her. People are draping their little black dresses all over the place, leaving the iron and hair-straighteners in non-health-and-safety-approved areas and wrestling for space in front of the mirror. And there’s always someone who insists on leaving their used make-up remover wipes discarded on the floor afterwards. How nice.

So yes, there are perks to the job and although it’s not all free Louboutins, you might get a Kurt Geiger discount card (not valid on sale items) and get first dibs on unidentifiable catalogue samples that have been left languishing in the cupboard. You can drink as much Starbucks coffee as you like, but you usually have to fetch it yourself and as for the free trips abroad, indeed they are very lovely but you have the responsibility of looking after the team and ensuring the smooth running of the trip and making sure it comes in under budget.

So…still want to be a fashion editor?