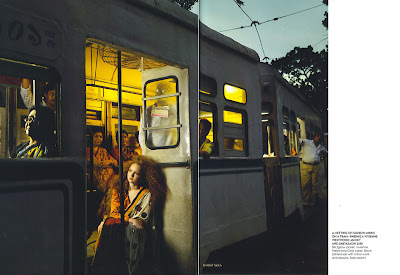 The most fantastic, crazy, unbelievable, shocking, scary and exciting thing has just happened.

I’ve been asked to go to India for eight weeks to be the fashion director of a well-known magazine launching over there. This is the kind of thing that usually happens to other people. I have spent fifteen years working my way up the rather crowded fashion ladder and have had a couple of pretty good career breaks but none as mind blowing as this one. I can’t say too much or I’ll blow my cover but equally, I had to share my news as it means I will spend most of January and February blogging from Bombay rather than Blighty.

Last year I had a similar experience when I was headhunted to consider the editorship of an iconic monthly glossy that was also launching in India (yes, they’re all after the tan pound). Although I had no ambitions (let alone experience) to be an editor, it was an opportunity that I’d have been foolish not to address, even though it would have meant moving to India for six months. In the event, I didn’t pass muster as I was considered ‘too British’ and not traditionally Indian enough for the role. Not very PC but at the same time I was secretly relieved.

And now this chance has fallen into my lap and it’s all too good to be true. I will spend eight weeks in Bombay although they are hoping I will want to stay longer. It will be an almighty challenge as I don’t speak Hindi, but thankfully my mother lives out there so she can help me master the lingo and of course, it means I get to spend some quality time with her. I’m not concerned about the hard work. I love thinking up ideas, putting teams together, sourcing new designers and reporting on all the goings-on in international fashion and retail. It will mean researching a whole new culture – so much has changed even in the four or five years since I last visited. Do they have Starbucks? Internet dating? Wi-fi (eek I hope so)? I don’t even know what sort of model agencies they have in India but I’m looking forward to finding all this out as I’m a research and information junkie anyway. Bring it on I say, I can handle it!

Frankly, I’m still in shock as everything has happened so quickly and almost too easily. I’m due to get my contract on Monday, along with a letter for my visa application and my flight will be booked next week. And on January 5th I’ll say goodbye to the flat I’ve literally only just moved into and my lovely D who will be coming out to visit me, and flying into the most thrilling adventure one could hope for for the new year. Will you come on my incredible journey with me?

What the movies don’t tell you Well, well, well