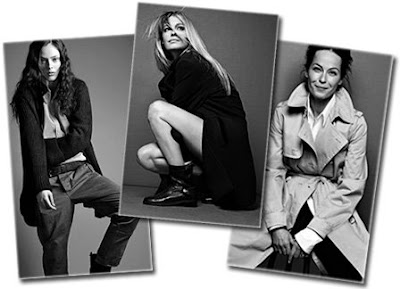 OK I know I said I never shop high street but guess what? I lied. While passing Gap today I decided to have a quick nose at what was new. Firstly the new in-store photography is beautiful. Mikael Jansson has shot the likes of Amanda Harlech, Chanel Iman and Cat Deeley (she’s unrecognisable…in a good way) for the new Classic Redefined campaign. I tried to find these pictures on the internet but the Google gods were against me so I’ve snapped them with my Casio Exilim from the little magazine thingy I picked up. Say what you like about Gap but the photography is always shit hot.

All the new stuff is in now in so I had a good root round. Guess what I bought? The jodhpurs! My reasoning was that I don’t want to look like a fashion victim (snob that I am) but if I don’t get them now then if and when I do decide I want them, it’ll be too late. That’s hype for you. I thought I was above it but clearly all those ‘must-have’ pics in Grazia, Vogue etc have sucked me in.

I have to say, having tried them on they probably will be going back. They remind me of a well-loved pair of army surplus combats I had ages ago. For the first few wears they were great, then they developed saggy knees. When the bum started drooping that was the final straw. These Gap ones have no stretch, the pockets are really badly finished and the button holes are too small for the buttons (don’t you hate that?). But I love the colour (I got the green ones) and they do make a change from my Nudie jeans. Only time will tell if I’ll be wearing them at fashion week along with every other two-bit fashionista.