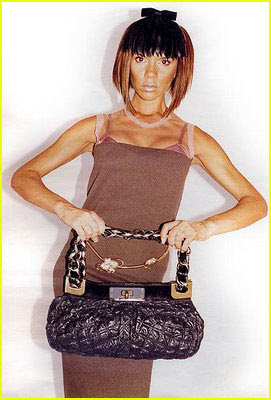 An article on Salon.com suggests our love affair with celebrity may be coming to a (long awaited) end. Sales of trashy American weeklies (Star, People, In Touch) are down while Rupert Murdoch has ditched his Pagesix.com website after only 3 months. Readers are fed up with the monopoly of no-listers (mostly reality TV graduates) claiming celebrity status and as for the number of celebrities encroaching on other careers – celebrity-as-model, celebrity-as-magazine-editor, celebrity-as-designer, well is seems enough is enough.

The celebritisation of fashion is the part that has pained me the most. It must be said that the noughties haven’t really given us much else, if we think about what the past decade will be remembered for fashion-wise what have we got? A load of revivals of previous decades – ’70s (think Sienna-style Boho and Kate Moss groupie chic), ’80s (Marc for Marc Jacobs’ indie fangirl , PPQ’s cocktail frocks), ’90s (House of Holland’s Nu rave), ’50s-’60s (Luella’s prom dresses and modwear), ’20s-’30s-’40s (any vintage romantic look) and on it goes. For a while we had the Atomic Kitten look – over-straightened hair, the low-rise-jeans-with-sparkly-top uniform – that was kind of new but do we really want this to epitomise the start of the twenty-first century? Or there’s the ‘challenging’ look – Prada/Marni-style sacky silhouettes in weird colours with a panoply of ugly shoes. Let’s face it, there’s not much in it. The fact is, the noughties will belong to the likes of Victoria Beckham, Nicole Richie and Paris Hilton – vapid, no-talent celebrities who court paparazzi attention and use the fashion industry to launch their own brands and keep their faces in our weekly issues of Grazia and OK. Admittedly, the fashion industry has used celebrities too – a Vogue issue with a model on the cover is a rare occurence – and why else is Victoria Beckham the star of Marc Jacobs’ latest campaign?

As with anything, when something’s been done to death there’s no other way to go than the opposite direction. As even ASOS.com starts to distance itself from the ‘As Seen On Screen’ tag that spelt out its original get-the-look USP and heads up-scale with premium brand designers, the question is, what will take its place?