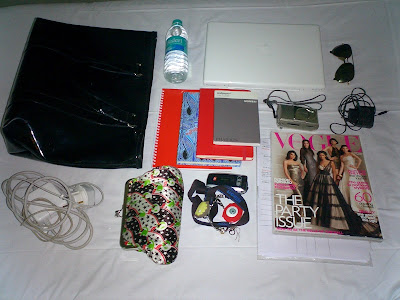 What is it about list-making that’s so therapeutic? I mean, to-do lists and shopping lists I can understand, they make order out of chaos so they serve a purpose, but listing what’s in your handbag? How useful can that be? However, Susie Bubble and www.buttonsand-stars.blogspot.com tagged me to play the ‘What’s in your bag’ game so I had to comply. I did a ‘What’s In My Bag’ post a while ago but things were different then. This month (and next) I’m in Mumbai helping to launch a new magazine so the contents of my Marc by Marc Jacobs PVC tote are somewhat different to what they’d be in London. Actually, it’s not one bag but two that I’m toting on a day-to-day basis. Luckily, I have a driver. I know! Insane, no? But don’t hate me, my company guesthouse is a 90 minute drive away from the office. And I need a driver because Indian cab drivers don’t do The Knowledge, so quite often they need to be directed and I don’t speak the lingo. Anyway…

Laptop and notebooks
In the big bag is my laptop which is kind of like humping a four-drawer filing cabinet from pillar to post. It has every email, picture and piece of research I could ever want or need. Then there are a number of notebooks and files. Somehow I’ve convinced myself that having more notebooks and files makes me more organised when in fact, my memory is so dire I can never recall what I wrote where. Duh. Maybe it’s that first-day-of-school feeling of writing in a new book that’s the appeal? Whatever, I can’t go anywhere without my Liberty notebook – a farewell gift from S, my old beauty editor when we all got made redundant – and my red Moleskine diary.

Bottle of water
I’m not one of those annoyingly virtuous people who religiously swigs their eight glasses of water a day. In fact, I rarely drink anything, ever. But in the office there are these guys who come round every morning handing out free bottled water so I take one anyway. I’m stockpiling them at the guesthouse to drink with dinner as we can’t drink the tap water.

Eley Kishimoto clutch
Um, I’m not quite sure what my satin star-print clutch is doing in this bag. I usually use it as a make-up-bag-slash-pen-case but there’s actually nothing in it bar about a million Muji pens.

Indian Vogue
In London I cannot venture out without a magazine. I have some sort of boredom phobia and need to consume information at all times – hence the Indian Vogue. If it’s not Vogue it’s Grazia, Harpers Bazaar, Teen Vogue or Allure. And I must say I do love those miniature versions of Elle and Red.

Camera
The camera was one of my best freebies ever from Olympus and even has my name engraved on it (even though it’s a bit wonky). Much as I adore my digital camera, I still like an old-fashioned camera with film so you can get all excited about getting your photos back months after the event. Having said that, I’ve been here a week and have taken precisely no pictures. Is that bad?

London mobile phone
I’ve had this phone for years. I’ve been using it to keep in radio contact with my boyfriend D and various friends in London because there doesn’t seem to be free Wi-Fi anywhere in Mumbai. Keeping it on a lanyard with various knick-knacks hanging off it means I can grab it from the depths of my bag just before its fourth and final ring. 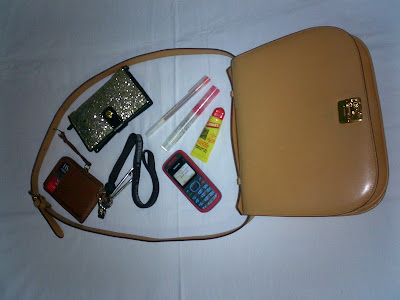 Vintage Celine bag
My smaller bag is my Celine bourgeois bag which has served me well in the short time we’ve been together. This has the quick-access stuff that I need at short notice like my Miu Miu glitter wallet. (Never buy a glitter wallet unless you want to be dusted in a shower of metallic shards every time you have to pay for something.)

Make-up
I never get girls who carry their entire make-up kit around with them. If I’m not going out after work all I want is my Carmex and Stila lipgloss. I do not need a professional-size powder pot, six-colour eyeshadow palette or eyebrow-grooming set thank-you-very-much.

Digital camera
My Casio Exilim is a bit shabby and old-school (only 2.0 megapixels – the shame!) but it’s so small and cute. It’s fab for sneaking into places as it fits in my hip pocket with room to spare. I have been using it on this trip to take candid 60-second videos. As I said, I’m so not a techno whizz but even I can handle this.