On winter florals, the new sexy and tights of many colours

There was once a time when fashion followed a strict order. The Shows were twice a year, the sales were in January and July and new season merchandise would hit in February and September. Oh how it’s all changed! These days there’s a whole new mini- season called pre-fall or pre-collection which bridges the gap betwixt summer and autumn and means we still have lovely new things to eye and buy, even while the sale rails are bowing under the weight of their wares. A knock-on effect of this is that magazines – needing to be ahead of the curve – preview the autumn collections as early as the July issues (which come out in June), with August (which comes out in July) usually publishing an entire supplement of runway pictures and additional editorial to satisfy our huge appetite for newness.

Which means that bloggers have to get there even faster! I’ve moaned before about the lack of real newness in collections reports. I hate reading about the ‘new’ boho or the ‘new’ nautical when really it’s the same hippie dresses and stripy jerseys we bought last year. So this time I’ve cherry-picked the trends that I think are properly new, as in a departure from what’s gone before.

Winter Florals
One of my biggest bugbears is the proclamation of ‘summer florals!’ year in, year out. This time though, florals have carried through to winter in a darker guise and I really like it. I particularly like how you can reconfigure your existing summer floral frock/blouse/scarf by layering with darker tights and knits and boots – an easy way to work the trend while Using What You’ve Got. If you do want to buy new, go for calf length silk satin in a loose slouchy shape as seen at Derek Lam or a fitted shift as seen at Bill Blass. 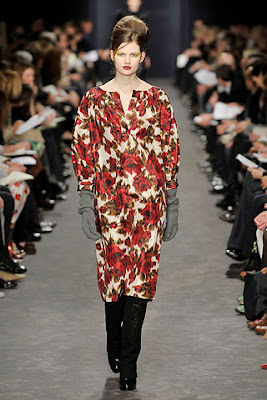 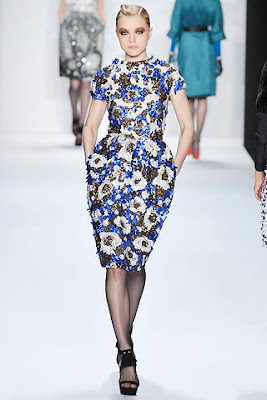 Fabric Mixes
This one I love. A real indication that the seasons are merging, this says ‘keep things adaptable and non-committal’ e.g. layer sheer chiffons with leather and knits, try a sleeveless jacket over a mohair sweater or mix light and heavy fabrics in one garment Christopher Kane stylee – that way you’re prepared for all climate-change eventualities. 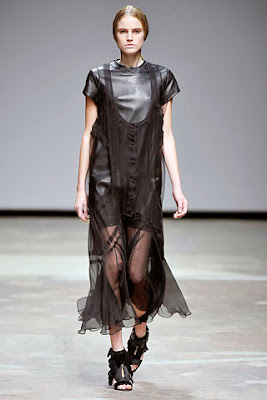 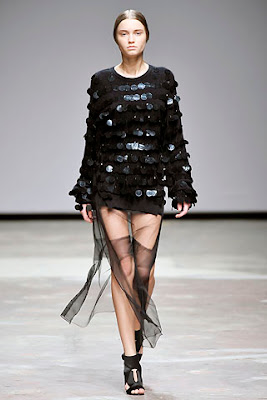 Guipure Lace
Prada’s infleuence on fashion is undeniable and all eyes are on classy black lace for autumn. Think outside the box – as well as dresses (which looked fresh layered over polonecks at Dolce & Gabbana), consider lace tights (seen at Emma Cook), ankle boots (at McQueen) and bags. Or why not all three together? 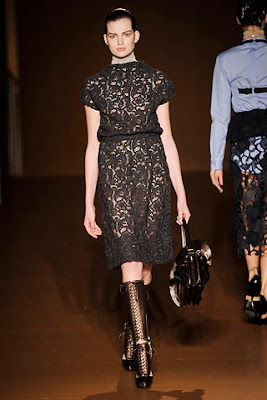 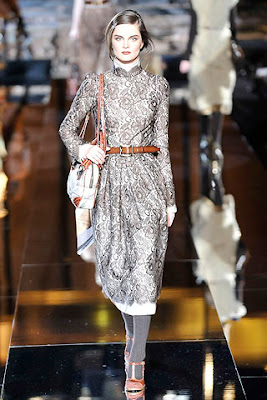 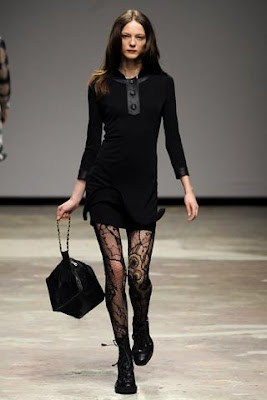 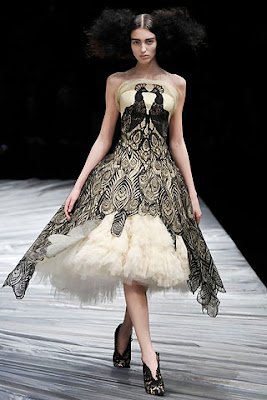 The New Sexy
Who knows how this one came about but by some massive zeitgeist stroke, the Italians we’ve always relied upon for in-ya-face sexiness have done a three-point turn and overnight instigated a new puritan aesthetic. Well, maybe that’s going a bit far but still, the slut-o-meter was turned down several notches with Roberto Cavalli showing prim party frocks and high-necked coats worthy of Madame Sarkozy while Dolce & Gabbana’s models were literally covered head to toe, from tight-fitting rollnecks to woolly tights via almost-frumpy long skirts and no-chance-of-a-fumble poodle-knit coats. As for Gucci, although there was still plenty of suggestion in Pat McGrath’s sultry smoky eye make-up and Luigi Murenu’s pefectly tossed centre-parted hair, the clothes were all about the layering and covering up – so you can be sexy without showing skin (reality TV wannabes, please take note). 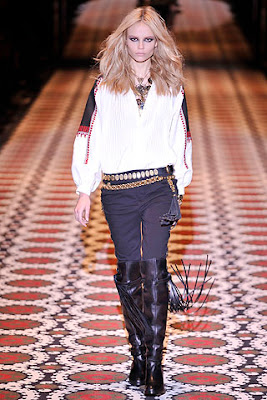 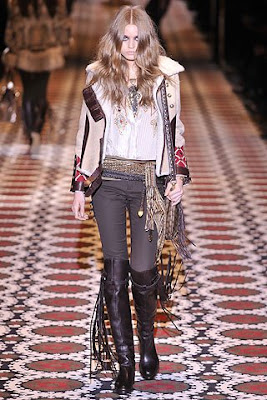 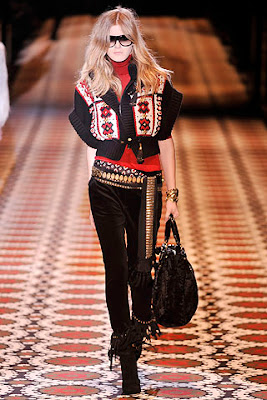 Hero Hosiery
To ram the ‘new sexy’ point home, just about every designer of note eschewed bare legs for some form of tights coverage or other. Rodarte showed cobwebby goth hose with their fairytale dresses, Alexander Wang and Vivienne Westwwod gave us DIY ripped tights, D & G provided tartan tights to go with their homage to HRH Balmoral headscarves-n-kilts and Missoni revisited sheer black tights for day (who thought we’d ever see that look come back?). Meanwhile, Louis Vuitton went to the logical conclusion of printing its monogram on sheer black tights, creating the season’s must-have accessory in one swift masterstroke. 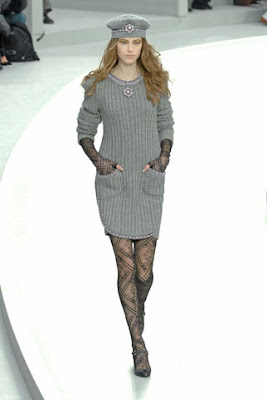 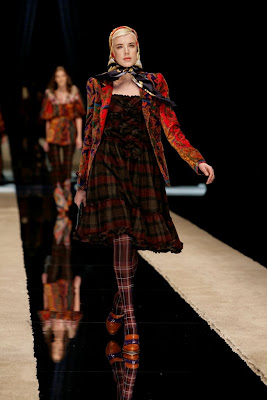 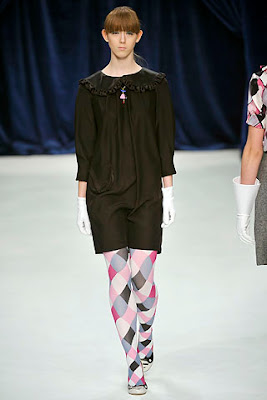 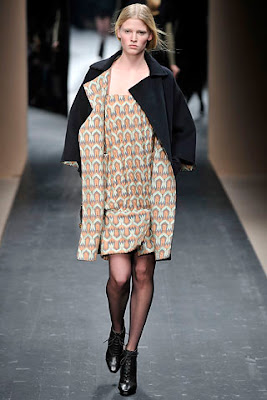 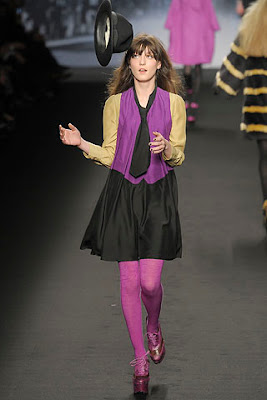 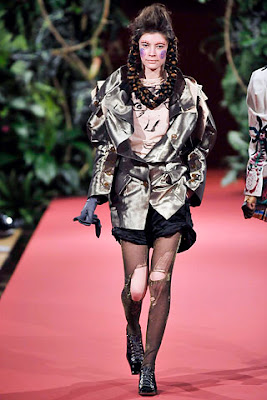 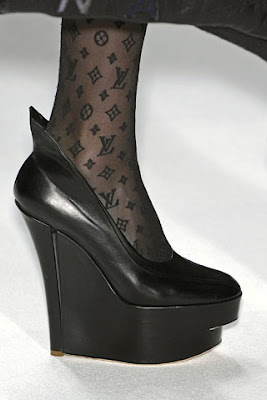 Watch this space for my forthcoming Q & A with Laura Godsal, the lady who created the hugely successful Mytights.com.

What is cool? Happy Friday