Mobile commerce and the rise of the fashion app

I don’t have an iPhone so have never got involved in apps but they’re getting harder to ignore. As I learnt last week at a trend briefing from The Future Laboratory, mobile commerce is definitely the future of retail. Ebay has just launched its app which has some great features including share-on-Facebook buttons and an ‘outfit builder’ (did you see the Mango one?) where you can try on outfits on a photo of yourself. Will this function really work in terms of leading to a sale? While the Ebay one is slightly clunky, I think it’s such an addictive, playful feature that it keeps you on the site for longer. While you may not really get an idea of what the dress will look like on you (see the video above and you’ll see what I mean), it can make you feel more experimental. You might not buy that dress, but you might think, ‘what I really need in my wardrobe is an xxx top’ and shop for that. ‘Sticky’ functions like this which keep you coming back to the site/app can lead to a sale at a later stage. 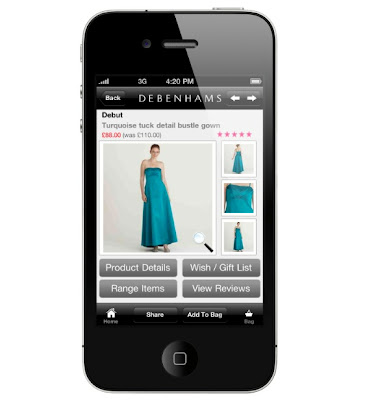 Meanwhile, Debenhams launches its app today. I have had a preview and played with it in store. Scan a barcode and the item appears on your iPhone with all the information you need. I particularly liked the reviews which might give you a heads-up on fit so you know whether to size up or down based on a previous customer’s experience. The barcode scanner is apparently a high street first but I’m sure there are many other retailers about to launch similar initiatives. You can also use the barcode scanner to access exclusive offers which will be promoted in specially generated QR codes in Debenhams’ store windows. Spooky!

Other features include a wish list and a gift list. If stocks are running low on an item you have wishlisted, you’ll be alerted – very handy. Debenhams TV has also launched this week. On your app you can watch a video, then shop the product from the screen (FYI, French Connection has recently done something similar with its Youtube ‘Youtique’). Simon Forster, Online Trading Director for Debenhams says, “Acting as a pocket personal shopper, downloading the Debenhams app means that getting lost, not being able to find your size and having to carry heavy bags home are pitfalls of shopping trips past.” Note to other retailers: please catch up soon.

Quote of the day Do you worship at the altar of Anna?