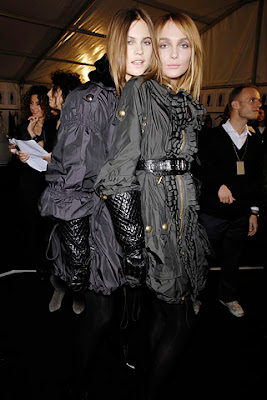 Could the end of seasonal dressing be nigh? Recent reports suggest that US designers and retailers have been consulting climatologists to decide whether in the future we will still be wearing coats in November and shorts in July.

This has been a long time coming. Who doesn’t roll their eyes at the end of each season when retailers yet again bemoan poor sales in coats due to a mild winter or swimwear due to a washout summer? The problem is that global warming has resulted in spring starting earlier and autumn starting later which means that the majority of the year simply isn’t particularly hot or cold. But the fashion industry relies on seasonal change, if only to get us in the spending mood. We’re used to thinking that August means getting ready for an entirely new change of wardrobe, trends n all, even though in these days of layering there’s no reason why our summer clothes can’t be reconfigured for winter too (just add tights – nice thick grey ones – and boots).

The question is what do we do about it? Designers are already in on the act with their pre-fall and pre-spring collections. They give us something new to buy every few months so we feel like we’re updating our wardrobes even if it’s not a proper seasonal change. And savvy designers like Giorgio Armani, Theory and Tory Burch are using lightweight knits, cotton-wool mixes and synthetics like microfibre all year round. In any case, the instant gratification of the internet also means that catwalk shows have less influence over fashion than they used to. Streetstyle blogs are the new trendsetters and they don’t rely on seasons as much as personal interpretation.

I say stick with the layering. Layering means you can be more creative and mix things up, and you can wear your favourite things longer instead of packing them away for months at a time. Plus winter clothes are damn tiring. Enough with the coats, jumpers and padded jackets, just the thought of the weight of them makes me want to pack myself away for the entire season.

I doubt if anyone’s interested but… D & G in ‘quite nice collection’ shock!