James Lebon: all round cool guy, gone but not forgotten 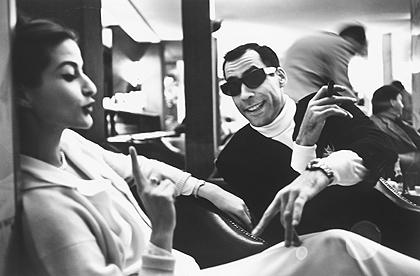 At last someone has written an (excellent) obituary for James Lebon who died just days before Christmas at the age of 49. This hairdresser/video-director/all-round-cool-dude was a member of the West London scene that I idolised from afar as a teenager. Sadly, I never had the pleasure of meeting him.

JAMES LEBON: VIDEO DIRECTOR AND GRAPHIC ARTIST WHO EPITOMISED FASHIONABLE LONDON OF THE EIGHTIES AND NINETIES

You could always hear James Lebon long before you saw him. The hairdresser-turned-film director, graphic artist and lecturer, who died before Christmas, conversed in the kind of richly resonating baritone that rippled coffee cups and demanded attention.

This was a man whose default-setting voice was “boom” and he would have been a shoo-in for the voice-over job had Lurch ever decided to give up door duties at the Addams Family residence.

But there was nothing ghoulish about the way Lebon looked or behaved. This was a warm, modest and charming, devastatingly dishy man; a West London heartbreaker, an effortlessly cool Rubirosa in sneakers and a bowling shirt who, particularly as a young man, was blessed with the kind of looks that could stop traffic. All levantine skin tone, brown eyes, long limbs, Elvis hair and movie-star cheekbones, he exuded the the recherché rock ’n’ roll idol look so fashionable in the 1980s. “James was a man whose charm and drop-dead handsomeness parlayed him into all sorts of rather fabulous situations,” his friend Tom Dixon recalled.

His father was Philip Lebon, a famous West End-based plastic surgeon and renowned swinger who ran with London’s fast crowd during the 1960s and had starry connections that included the comedian Lenny Bruce and the controversial “anti-psychiatrist” R.D. Laing. He was Judy Garland’s physician and conducted Tony Blackburn’s hair transplant. The TV journalist Alan Whicker once devoted an episode of his popular Whicker’s World show to his work and lifestyle.

James’ friend, the photographer and film-maker Jamie Morgan, describes life at the Lebon’s home on Weymouth Street as “like something out of O Lucky Man! Philip’s surgery was in the ground floor of their house, so as boys we would look out of the bedroom window and see all those exotic people being led to and from to their cars, covered in strange bandages.

It was amazing because back then no one knew anything about plastic surgery.”

Philip and his wife Naomi, a society beauty who died at the age of 50, sent James to a series of progressive schools – the French Lycée, Ibstock, the Michael Hall Steiner Waldorf School in East Grinstead and Sutton Valence co-ed in Maidstone, so it must have been something of a surprise when he decided to become an accountant. He didn’t last long.

“James was a punk rocker so being an accountant was never going to suit him,” says his brother Mark. “I was starting to make my name as a photographer and I think James saw the scene I was involved with and wanted to know how he could get involved. “

Lebon studied hairdressing at Vidal Sassoon’s academy then set up his shop, Cuts, on a stall in the basement of the achingly hip Kensington Market in 1980. “To launch the salon, James decided that he would make a film,” Morgan said. “Ten of us in a line, all sitting on stools, getting our haircut – just one minute for each haircut; razors, clippers, scissors flying.” Later, James would invite the band Funkapolitan, with Tom Dixon on bass, to play their first gig at the market.

Lebon (who quickly became better known as his nom de tondeuse “James Cuts”) made a name for himself doing vogueish flat tops for the boys and sexy, androgynous cuts on the “bob and gob” model girls of the moment. Once, a young woman who had come for a haircut, complained that a scar created an ugly bald patch on her eyebrow. James told her the imperfection actually enhanced her beauty and touched the clippers to his own dark brow to make the point. Within weeks, boys and girls all over London were sporting the trademark Cuts “boxing scar” eyebrow.

Cuts became “These Are Cuts” and moved to a ritzier address on KensingtonChurch Street, where David Bowie was an occasional customer. Lebon was getting mentioned in magazines – The Face, i-D, Harpers & Queen. He became the session hairdresser for stylist Ray Petri’s “Buffalo” fashion collective.

He was making frequent trips to the US, styling hair on high-profile photography, film and advertising sessions (where he would often end up as one of the models). He brought back early hip-hop mix tapes and records from New York and blasted them from Cuts’ in-house sound-system.

In London, with a couple of likeminded friends, he opened the Language Lab, the capital’s first hiphop club where a young Neneh Cherry made her rapping debut. Mick Jones, formerly of the Clash and Big Audio Dynamite, recalls Lebon as “the super-cool guy working the queue. He came up to me and complimented me on my smart suit. We became firm friends straight away.” James later made a video clip for BAD II.

Morgan remembers him running the door with a cheeky grin and a microphone in his hand. “James wasn’t the greatest rapper. His deep tone wasn’t really suited to it. But it didn’t matter. He wasn’t scared to make a fool of himself if it meant entertaining everyone.” Undeterred, by his atonal, loveable earthquake of a voice, he made a record, “Sexify You”. Sample lyric: “Don’t be shy, girl… I’ll woo you with my shampoo ? I’m gonna sex-sexsex- sexify you?”

In many ways, Lebon typified the anyone-can-be-anything, swaggering chancer spirit of free-form, maverick 1980s London. Once, when he was cutting the veteran Bond producer Albert “Cubby” Broccoli’s hair, he decided to audition for the then vacant 007 role as he snipped. “I mean, come on,” he appealed. “My name’s James Lebon! Give or take a couple of letters I am James Bond.”

After Cuts moved to Soho Lebon grew tired of salon life. He felt like he had achieved all he could hairdressing and had fallen out with his business partner Steve Brooks. So, after one particularly good year, when he had made more than £100,000 (a massive amount for a hairdresser back then) he made the decision to curb his dilettantism and concentrate on one career, enrolling at film school at New York University.

He was a tenacious natural with the camera; a tireless, Warholian documenter whose trademark technique was candid, hand-held, scratchy, guerrilla- ish, new wave-esque. Mixing up technologies – Super 8 and video, industry film stock and domestic grade VHS, hi-band and lo-band editing – he made pop videos for Bomb The Bass, D-Ream and Curiosity Killed the Cat. Short films starred a young Ewan McGregor and an unknown Penelope Cruz.

He would do the cool and the commercial, Kylie and Right Said Fred, as well as streetwise house and hip-hop. But his ability to spot new talent and work with ridiculously small budgets made a rod for his creative back. Artists tended to go to him when they needed their first, stylised, penny-pinching break, then turned their backs on him when the big cheques came in. Lebon was never bitter about this.

In the US he met Shawn Stussy, who was starting a skate/surf clothing brand. Lebon brought Stussy label to London, hooked up Shawn with the businessman Michael Kopelman and helped make it a perennially hip, crossgenerational global phenomenon.

Towards the end of his life Lebon worked as a graphic artist, mainly for Stussy, and as a lecturer at the London School of Fashion specialising in fashion photography and IT. But even when money was tight he had bags of style. To celebrate his marriage to Moni Ling in 2001, he hosted a mass picnic on Primrose Hill. Drinks provided, bring your own food. Everyone was invited and hundreds showed up.

It is a perfect tribute to his enthusiasm for modernity, technology and open-book networking that his sudden death evolved naturally in to such an organic, multi-media event. As soon as the news broke, people posted sentimental bits of video footage on YouTube and a Facebook site was set up. The testimonials flooded in – Boy George called Lebon and his brother Mark “two explosions of charisma”.

His funeral fell on a Siberian Saturday but the Kensal Road crematorium service was a star-studded, standing room-only event. He was laid to rest in a cardboard eco-coffin covered in Stussy stickers which his young children, Sen and Tien, decorated with hand-painted messages. Inside, James was dressed in Levi jeans, a pair of sneakers and his favourite military bomber jacket. Super-cool to the end.

How to rock a briefcase "The stockroom is going wild…"