Bubbling under: the bling revival? 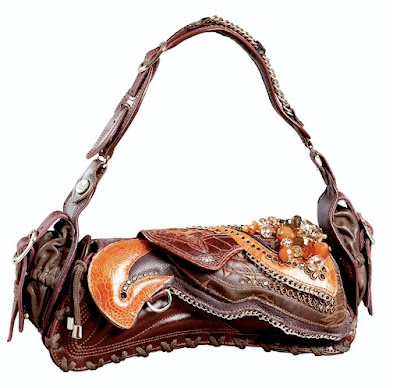 While talk is rife of a return to minimalism for autumn/winter (namely at Bottega Veneta, Prada and Jil Sander), I’m sensing a possible undercurrent of bling. Let me explain. After attending the Selfridges Christmas press preview last week, my colleague B and I discussed the over-abundance of tacky glitz we’d just seen, including lavish £1,200 McQueen handbags, £15,000 cashmere dressing gowns and ostentatious Steiff teddy bears encrusted with emeralds for eyes. We baulked. What happened to stealth wealth! Is this really what we’re supposed to covet for Christmas? Moments later, we discussed the Selfridges summer sale and I recalled seeing queues at the Gucci and Fendi concessions but not at Miu Miu or Chloe. On further debate, we realised the queuing clientele had been the visiting Middle Eastern customers whose love of a label and a logo is well documented. B added that apparently Bracher Emden handbags, which are big on gaudy decoration and don’t come cheap, are brought out for a two-week period during the summer specifically for those selfsame Arab customers who holiday in London when their own countries are too hot for comfort. I thought this was interesting as a factual snippet but didn’t think much more of it. Then yesterday while browsing Vogue.co.uk, I read that Lebanese designer Elie Saab, known for his showy red-carpet gowns and 101 ways with a sequin, has recently set up shop at Harrods.

What is making these stores cosy up to the Middle Eastern market just now? Could it be that while the Brits and Americans are keeping their hands tightly clasped over their (last season) Mulberry wallets, the Middle Eastern consumers are splashing cash faster than Victoria Beckham on speed? If you do the maths it all starts to become clear. Abu Dhabi is pumping 400 million barrels of oil a day which means that while the credit crunch has affected everyone else’s shopping mojo, these luxury-seeking visitors are still spending big. From a business point of view of course it makes sense for the retailers to court the tan pound, they’d be fools not to, but it makes me wonder how long the flash maximalist aesthetic will take to trickle down to the rest of us?