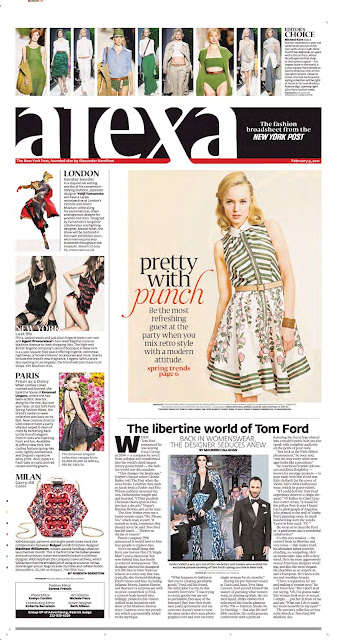 My, isn’t Tumblr so very popular right now? The nobrainer way to blog, it’s all about the quick photo, newsy snippets and reblogged posts which are so user-friendly for our ever-decreasing attention spans. I’m fascinated because since I first started working for online publications I have watched the patterns of content change over time.

In 1999 I started working for a women’s website where I would contribute 400-word fashion articles broken into paragraphs and illustrated with a picture. These were read by women in offices who would browse the site in their lunch hour. As more magazine-style sites emerged and there was more competition, articles became shorter. “People don’t want to read long articles at a desk, they want Top Ten slide-shows with images and a tip,” I was told. These were the days before everyone had a laptop and reading on screens became the norm. The years passed, the iPhone was created, WiFi appeared and we all became quite comfortable reading content online. Blogs flourished and people became interested in personal opinion. Word count increased. Blog count multiplied. Twitter arrived and information addicts rejoiced. Then despaired. (Guilty!)

With all this ready information, the brain can’t cope. We worry about our children and how they will learn to focus with so many distractions. Tumblr emerges and is a runaway success. Why? Because it’s bite-sized blogging, a way to keep up without going into detail. It’s blogging-lite for the time-poor. (Pity the brands and old school bloggers tearing their hair out – “aaargh, another social media platform to manage!”) At the same time, the rise of the two-minute video threatens to take over from the written blog post – young people especially would rather watch a moving image than read. So in effect we’re at the top-ten-slide-show stage again where people want short form over long. Interestingly, when I read about the latest issue of the New York Post’s new(ish) Alexa paper it seemed very appealing – a thin, well-edited fashion newspaper that has just-indepth-enough information to digest in one go (there’s an online version too). When you read on paper, you take in more. Having noticed how much time I spend looking at screens (and how little information I retain long term), digesting paper journalism from the comfort of a sofa is almost a novelty. So I’m not panicking. We’re in the midst of a micro-information moment and I’m happy to ride it out. It looks like there’s a slower, more considered alternative lurking round the corner which I’ll willingly embrace – if my brain hasn’t exploded by then.

Boys (and 1 girl) on wheels Karlheinz Weinberger in New York