Using What you’ve Got 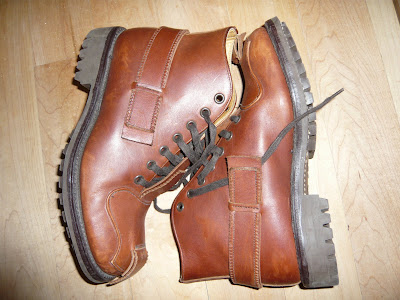 One of the results of the economic slowdown is being a bit more picky about what one chooses to fritter one’s money on. Those little £20 Primark splurges which all too often end up neglected and unworn (and still tagged) in the carrier bag aren’t quite so clever any more. Neither is the prospect of the summer sales so appealing. Where once the idea of vastly reduced See By Chloe would have me hot-footing it to Harvey Nichols faster than you could say “I’ll take two”, now I’m dreading the lure of the sales and the subsequent guilt of buying anything new.

So I’m embracing the concept of Using What You’ve Got. I’ve always been against that oft-repeated advice that says you should throw away anything you haven’t worn for six months. Six months! That’s not long enough at all. Six years maybe, but even that seems ungenerous. To prove my point, I recently unearthed a pair of John Moore boots that had been hibernating in my wardrobe for some years. John Moore boots are stompy Commando-soled bovver boots from the early nineties, very much part of the Westwood/Christopher Nemeth/Joe Casely-Hayford deconstruction period. Think Westwood pirate boots crossed with a monkey boot and you’re fairly close (oh dear, don’t they sound hideous?). I had a well-worn pair back when I was a fashion student, and then happened upon another pair about eight years ago in a clearance sale. They haven’t looked quite right with anything I’ve been wearing in that time but a chance encounter with some two-year-old Levi’s that had been put on the back-burner soon resulted in an impressive new outfit. By turning up the hems of the skinny Levi’s and pairing with the John Moores, plus throwing a high-necked swiss-dot blouse in the mix, I came up with a new take on an old look, suggesting something of a sweet-skinhead hybrid with a nod to Victoriana.

Clever as ever, TopShop is also championing the Using What You’ve Got initiative as part of its first ever Green Week which starts on Monday. They’ve partnered with Rubbish magazine to launch TopShop Wants Your Rubbish, a fun but practical website all about reusing, recycling and restyling. Lucky Londoners get a special treat with an-instore clothing workshop at Oxford Circus by Cheap Date’s Kira Jolliffe. Although a sensible part of today’s make-do culture, Using What You’ve Got is also a great deal of fun. If you’ve committed something to the style Siberia of your closet, it’s very much a case of out of sight out of mind, which means it’s all too easy to forget what you own. So that when you eventually unearth said New Look poncho/Maharishi combats/Adidas Gazelle trainers (delete according to age) you also find there are endless new outfit possibilities when you add it to all the things you’ve bought since you last wore it.

Mind you, it’s not all plain sailing. Using What You’ve Got can end up creating more gaps in your wardrobe than it plugs. Chuffed as I was with my new turn-up Levi’s-and-John-Moore-boots marriage, I couldn’t help but feel something was amiss. If only I had a nice cherry-red Margaret Howell Harrington jacket, then my outfit really would be a goer. Which brings me to the inevitable question…when does the Margaret Howell sale start?

Quote of the day Pashleys at the ready!