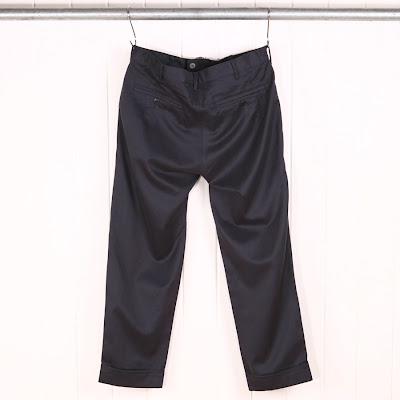 My quest for the elusive chino proved not too taxing after all. The backstory: I have been searching for a chino for months, years even, but was especially keen having been gifted a classic Levi’s jacket for my birthday. Not wanting to go down the double denim route, I fancied that a Levi’s jacket and chino combo would be suitably fash-arty in a Jane Birkin-meets-Robert-Rauchenberg kind of way.

There was me anticipating an entire afternoon of schlepping from Zara to Banana Republic to maybe even Primark on the advice of some kind commenters but thankfully it was all pleasantly quick and pain-free. Banana Republic was my first port of call. Not a shop I frequent as it’s all a bit officy and grown up for me. But Make Do Style and Observation Mode suggested it and I like Gap so decided to give it a whirl. Hey, where were all the chinos? Not a single one did I see. The nearest thing was a wide-leg tailored beige trouser with a thick mumsy waistband. Eek, call the fashion police! Does Banana not read Grazia? Does it not realise that chinos are big fashion news at the moment (and not to be confused with the dad-chino of yore)? Missing a trick I’d say. Also, all the trousers were off-puttingly creased. Nasty. Time to invest in a steamer Banana! I must say that the accessories were lovely though, remind me to go back if I ever need a belt.

Next stop, YMC. This is more my style, I see it as the British answer to APC. Its poshed-up utilitarian classics are popular with London’s creative and media set – right up my alley then. I’d already seen a couple of promising candidates a couple of weeks ago but not had time to try them on. The store itself is lovely – all vintagy fittings in a former gallery space – in fact, YMC’s Jody Moss also sources select pieces of vintage womenswear to sell alongside the own-label collection. So I went to try on some trousers but oh dear – disaster. None in my size. But what was this? Some rather nice slouchy 3/4 mens chinos in the softest greige brushed cotton. On they went and reader, they were perfect! Who knew I would end up finding a pair of mens chinos to fit my 5’2, size 8 frame? The pockets are placed low and deep so I can put my hands in them with arms fully extended and the waist sits just above my hip-bones – i.e. they’re not so baggy that they’re sliding off. If there’s a moral here it’s to keep an open mind and always try things on. Of course the story doesn’t end there as I now have my eye on the navy colourway (above) and a dark blue indigo jean in a similar cut. Not to mention the women’s versions. Typical, nothing for ages, then a whole procession of options at once.