To Chet with love 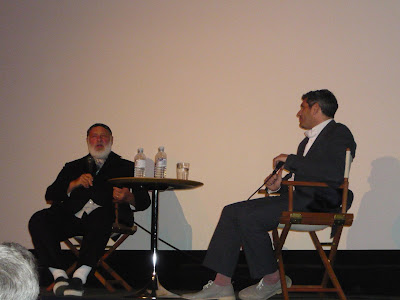 Yesterday I decided to forgo the opening of the Jean-Charles de Castelbajac store in favour of the Let’s Get Lost screening and Q & A with Bruce Weber at the Curzon Cinema. I’ve been all excited about this for ages even though I could have sworn I’d seen it before. I couldn’t have though, as it transpires that this Chet Baker documentary – which first came out in 1988 – was only ever shown once at the ICA. The film I saw must have been Broken Noses, another Bruce Weber black and white film, this time about a hopelessly handsome boxer.

Anyway, Let’s Get Lost was a real treat. Bruce Weber introduced it by first giving a few shout-outs to those who had made the film possible, including Joe McKenna who did the styling and was in the audience (along with Pam Hogg, Jackson Scott, Claire de Rouen, the cute actor-y guy from Class of 2008 and um, Ben de Lisi) and then went on to say that he hoped what we would take away from the film was to embrace the characters we know. To ask them questions and make the most of them while they are still with us. (This was quite poignant as Chet Baker died suddenly before they finished making the film.) Next, completely out of the blue he introduced singer Angela McCluskey who I discovered a few months ago and who has the maddest, huskiest and most mesmerising voice I have heard for a long time. And here she was singing with a live jazz band, mere feet away from me in the same room as Bruce Weber and Joe McKenna! Life is so funny sometimes, innit?

The film was two hours long and beautifully shot and even though I don’t care for jazz, it just meandered along in a rather lovely way. There were some great characters in the film (Chet’s daughter Missy was especially gorgeous and endearing), a few laughs and wonderful cinematography, peppered with still photographs of the young Chet Baker taken by William Claxton. Certain parts of it looked like a Bruce Weber shoot come to life which is pretty much what it was.

In the Q & A that followed, Weber explained how he likes to work surrounded by people he knows – quite often in the filming they didn’t really know what they were doing, or what they were aiming for and that’s what he liked about it. He talked about how with his photography he loves the idea of going on a journey. He enjoys photographing people at the beginning of their ‘journey’ and the idea that they might show their grandchildren in later years. He is currently working on a film about Robert Mitchum, another one about a young bull rider and another on religion and how people deal with it.

Weber came across as a totally cool but humble guy. It’s always a bit of a risk meeting your heroes (even though I didn’t actually meet him) but he didn’t disappoint. I’m looking forward to seeing Bruce Weber Shorts next Saturday, followed by Broken Noses on the Sunday.