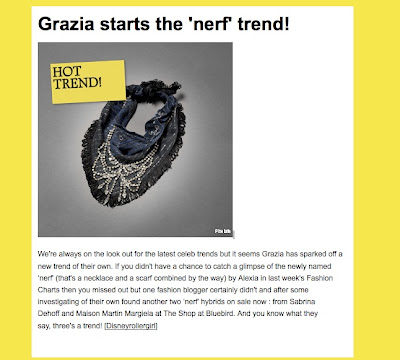 Pretty Face has tagged me to do the ‘Four Thingys’ meme. So here goes:

1. Four places that I go to over and over:
Borders for almost-daily replenishment of my magazine stash

The Brass Rail Cafe at Selfridges. A good place for thinking and writing

The Curzon Cinema in Shaftesbury Avenue. Sometimes for the movies, mostly for the Konditor & Cook cakes

2. Four people who e-mail me regularly:
My D with scarily expensive ‘what do you think of this’ links to vintage furniture on Ebay.

Poupeegirl, something I signed up to ages ago but can’t understand how it works cause it’s in Japanese! (Update…oh, they’ve added an English translation!)

Grazia Daily (wow, just found out they’ve linked me too!)

3. Four places I would rather be right now:

4.Four of my favorite places to eat:
Hugo’s in Queens Park for the sausage sandwiches and chocolate brownies

Diana’s in Notting Hill. The food is average but it has a certain charm, especially with every inch of its walls covered in Princess Di memorabilia

Busaba, Wardour Street. Yummy food but service could be better

Harvey Nichols Cafe. I could eat here every day.

6. Four TV shows I watch over and over
Seinfeld

(I don’t actually have a working telly, but this is what I’d watch if I had one)

Paninaro revisited Moleskine at The Shop at Bluebird