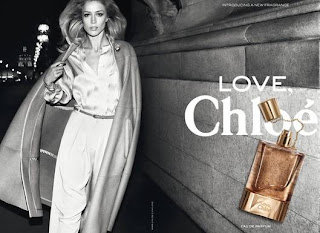 Well, what a storm in a Café de Flore teacup about the use of a – shock horreur – YSL belt in a Chloe fragrance ad. Did stylist Joe McKenna mischievously throw the skinny waist-cincher in the mix or was it an intern mix-up*? Personally I see nothing wrong with a bit of cross branding. When Ines de la Fressange agreed to walk the Chanel ss11 runway, rumour has it that it was with the proviso that she wore Roger Vivier shoes rather than Karl’s creations. Ditto the ad campaign. Likewise, J.Crew was recently in the news for directing website visitors to competing brands alongside its own merchandise.

I would like to see even more deliberate mixing up on the catwalk and in campaigns – say a Comme Des Garcons jacket with a pair of vintage Levi’s or a Ralph Lauren coat with Gap khakis. Why not, isn’t this how people dress now, rather than head to toe in one designer? I think it would show immense confidence for a brand to show its own designs styled with another’s, although still in keeping with its overall aesthetic. After all, almost every name designer of note has done a high-meets-low high street collaboration, isn’t this just a continuation of that idea?

*Oh yes, when in doubt, blame the intern!