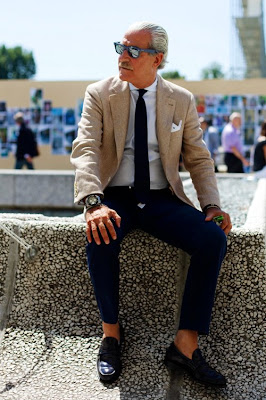 This picture appeared on The Sartorialist with a commentary commending his jeans. The comments that followed argued whether they were jeans or not. Now I don’t think they are but it got me thinking, tailored Capri jeans… has anyone done such a thing for girls? Surely they’d be the ultimate elegant trouser-jean. I’m loving the slim ankle-grazer jean at the moment, with loafers or lace-ups and a tucked-in shirt and something flamboyant or feminine such as a silk Hermes scarf or a giant f*ck-off necklace but for smarter days, a denim trouser with side pockets and no stitching would be so appropriate, no?

Incidentally, I’m convinced I read a denim article in US Vogue years ago which mentioned Adriano Goldschmied setting up a denim design academy in London. When is someone going to take that idea and run with it?