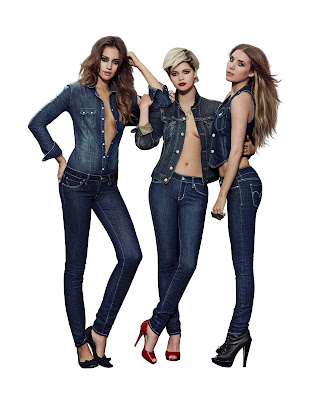 So Levi’s has launched a new butt-hugging jean. Hmmm, I pondered when the email came through, do we really need another tight-ass jean in our lives? But here’s the rub: Levi’s Curve ID isn’t just another skinny jean. Harnessing all the resources and history it has at its fingertips, Levi’s has decided that it can’t rest on its 501 laurels. it’s not enough to be known as the heritage mens denim brand, it wants to own the womenswear market too.

I was sceptical until I arrived at the launch. All the PR girls were outfitted in these ultra-snug denims with not a dud fit among them. I’m not anti skinny, stretchy jeans but I have certain bugbears. I don’t like too much stretch, (please do not utter the word ‘jegging’ in my presence) and I don’t like thin denim. I also don’t think skinny jeans should have pockets on the legs (sorry Houlihans). I hate it when skinny jeans wrinkle and it goes without saying that I can’t abide a camel-toe. So how did the new Levi’s Curve ID manage to avoid all these no-nos, fit everyone who tried them and look fantastic on each and every person?

Levi’s didn’t launch these jeans lightly. It brought together a massive team to study the shapes of 60,000 women worldwide. Ten body shapes were identified and narrowed down to three distinct silhouettes that account for 80% of women across the globe. As Rosey Cortazzi, VP of design and merchandising for Europe told me, there is a vast difference in women’s body shapes globally. “The Japanese can be quite curvy, Southern Europeans are also more ‘bold’ [Levi’s-speak for bootylicious]. The body also changes as you age – you become straighter as you put weight on the middle. French women’s bodies don’t change much with age but they’re the only ones that don’t.” Even after analysing the data and identifying the body shapes, Levi’s tested, fitted and tweaked. “We did ‘fit safaris’, where following the initial fits, we took them everywhere and adjusted them based on feedback,” recalls Cortazzi. “That was the most enlightening thing, to hear how girls think about the fit all over the world, from Asia to the US, to Germany, Turkey, London, Stockholm.” In fact, based on this research, there’s a fourth fit in the pipeline – supreme curve – that will be aimed at the South African market.

Levi’s did away with the outmoded waist measurement and instead invented its own measuring system that calculates hip to waist ratio, not unlike measuring for a bra. The result is three body types – slight curve, demi curve and bold curve. Within those there are a number of jean styles and washes. The tricky bit is that the difference between body shapes can be marginal which is why for the launch, we were attended to by saintlike denim ‘curve consultants’ who have extensive Curve ID training. The jeans are sold at Levi’s stores as well as premium retailers (in the UK this includes Liberty, Harrods, Donna Ida & Trilogy) which is as well because you’ll need to be measured and advised. But once in ‘your’ jeans, the results are seriously impressive. Apart from the fact that the rise is about an inch too low for my liking, the jeans really do feel different. It’s a combination of the cut and the denim. Levi’s uses ‘recall’ fabric so unlike say, Topshop jeans, these move with you and don’t ride down as you walk. Cortazzi also insists that the Italian-milled denim doesn’t stretch or shrink after washing, “I’ve had mine for six months and they don’t look any different”.

Levi’s research shows that the majority of customers will be a demi curve so there will be more choice of styles and washes in that shape although nothing outlandish – the widest leg is a subtle boot cut. My shape (slight curve) is limited to (a very nice) ‘clean superstretch’ indigo or ‘moonlight’ (a softer, worn-in denim) and skinny leg. Although my Curve ID jeans are a bit snug on the calf for me, there’s no denying they look very sexy with classic stilettos and could be perfect for tucking into knee-high stack heeled boots (and isn’t that look due a revival?). As time goes on and sales are monitored, more styles will be added to the range according to popularity. Still haven’t found your holy grail skinny jeans? Give the Curve IDs a go.

Mandi’s Basement The future of fashion: inclusive or exclusive?