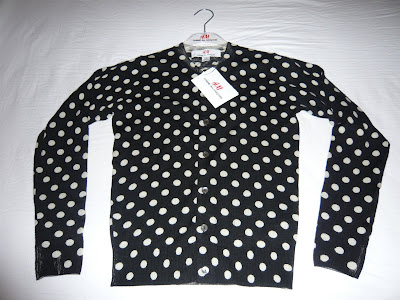 So after much anticipation, C-Day has arrived. I had wanted to go to one of the Comme Des Garcons for H&M openings but alas, it clashed with an acupuncture appointment which I decided had to take priority. In the event, I found myself in Regent Street after lunch so popped my head in to see if anything was left. Despite all the hype and hysteria, I was greeted with a completely civilised scene. All the rails were fully stocked and an army of staff were visible tidying and folding. There was no frantic or undignified behaviour at all. Aside from some of the grumbles I’ve been reading along the lines of ‘where is the wacky stuff?’, I thought the collection was ‘spot’ on (if you’ll excuse the pun because if there was one key theme it was graphic polka dots). White shirts, perfect-cut trench coats, merino-wool knits, grey marl, polka dots, Peter-Pan collars, long-sleeve tees – these are the essence-of-Comme signatures that appeal to me, and the things that will sell in volume at H&M, not the crazy catwalk stuff that the average high-street customer can’t get their head around.

Although the polka dot scarves and bags were nowhere to be seen by the time I made my appearance, I was happy to see the classic round-neck polka dot cardigans in grey or dark red with white dots. I agonised over whether to get one or both but decided to play sensible and stick to a solitary grey one. I also eyed up the navy wool jersey long-sleeve tees (identical to the ‘real’ Comme ones I used to stockpile in my twenties) but £30 was a shade too dear for me, even if they are made in the CDG factory. In fact, overall from what I could see, the quality looks superb so I do think these prices are worth it, but for me one piece was enough and I couldn’t even be bothered to buy extra stuff to ‘flip’ on Ebay (although I did filch a commemorative Comme for H&M hanger…anyone wanna buy it?). Verdict: another phenomenal success for H&M.