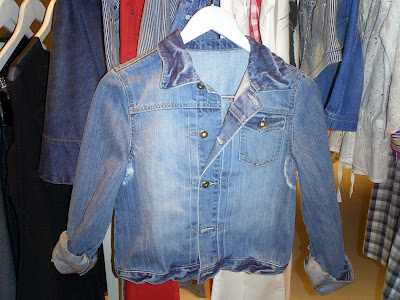 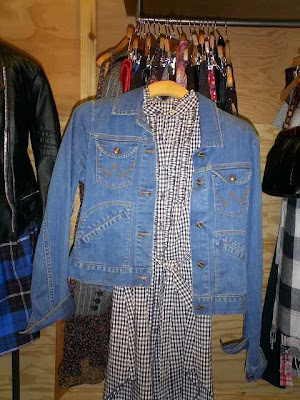 After me banging on about it for the best part of a year it looks like the classic denim jacket is starting to come back into circulation. I have been hunting high and low for a snug-fitting classic Levi’s jacket – not too new, not too worn- in every Rokit, Beyond Retro and vintage market that crossed my path. Even Ebay didn’t come up with the goods. The denim jacket has been off-radar for a fair old while, except for a brief respite around 2001 when the Marc Jacobs denim drummer boy jacket was the style du jour.

Blame it on the recent obsession with jeans, no one wants to do the denim-jeans-and-jacket combo so if all you’re wearing is jeans, it follows that the jacket will take a back seat for a while. But now there’s something new to wear with a denim jacket – a dress! The dress has been working its magic for a good few seasons and now it’s properly mainstream. Even the most die hard jeans-wearer (ie, me) has at least one dress that she can wear for day that ticks the same no-brainer box as her favourite loveworn pair of jeans. Next season the ‘it’ dress is likely to be something light and floaty, possibly with a ditsy floral print that can be dressed up with heels or down with wedges and…ta daaaa…a denim jacket!

Spotted at TopShop’s spring-summer preview was a passable version which would look hot with a ditsy floral dress or some cute sailor shorts or even my khaki Gap jodhpurs and a tie-neck blouse. The vintage-style seventies cut by Wrangler which was previewed at the Urban Outfitters press day is super-soft and would go perfectly over a stripy T-shirt dress by Zoe’s Tees with a pair of roper boots or cowboy boots (vintage of course). Liking the Wrangler jacket? Well despite it being shown for spring summer 08, you can in fact get one now. While browsing the Kensington High Street branch yesterday I noticed they are already in stock. The denim jacket revival has officially begun…